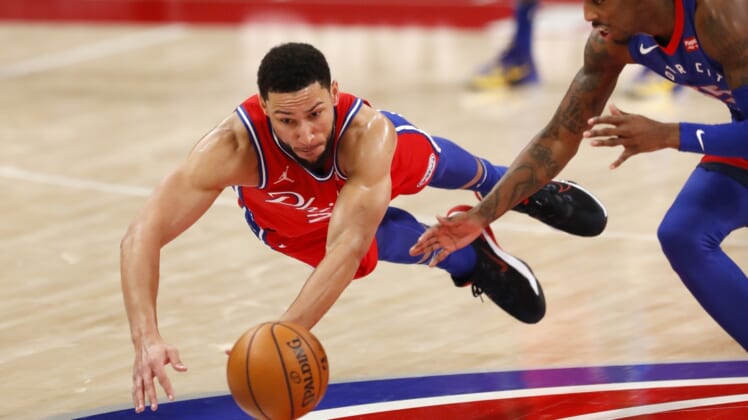 Joel Embiid had 33 points and 14 rebounds to lead the Philadelphia 76ers past the host Detroit Pistons 114-110 on Saturday.

Jerami Grant was limited to 11 points on 3-for-19 shooting. Grant had scored 20 or more points for 14 consecutive games.

The Pistons rested Blake Griffin and Derrick Rose in the second game of a back-to-back.

Ellington scored 15 first-half points as the Pistons led 63-61 at the break. Detroit knocked down nine 3-pointers by halftime while Philadelphia made just a pair.

Neither team led by more than five points in the third quarter until Embiid made an open 3-pointer from the top of the key, giving his club an 80-72 lead.

Detroit scored the next seven points. Late in the quarter, Mykhailiuk made back-to-back 3s to tie the score at 85-all. Shake Milton scored five points in the final minute of the quarter as Philadelphia took a 94-88 lead into the fourth.

Milton hit a 3-pointer and Dwight Howard had a dunk to increase the Sixers’ lead to 11 during the first two minutes of the fourth. Once again, the Pistons went on a 7-0 spurt to creep within four points.

Josh Jackson made two free throws with 2:30 left to cut the Pistons’ deficit to two, 107-105. Embiid then scored in the lane.

Embiid took a charge and blocked a shot to keep the Sixers’ advantage at four entering the final minute. Simmons split a pair of free throws with 31.9 seconds left.

Grant drained a 3-pointer to make it a two-point game. Simmons answered with two free throws.

Detroit’s Delon Wright made a layup but Embiid hit two free throws with 7.2 seconds left to ice the Sixers’ victory.

The teams will meet again in Detroit on Monday.