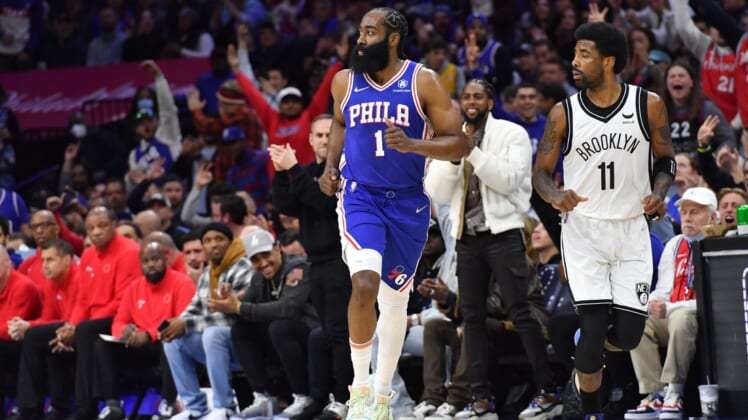 How will the Philadelphia 76ers respond to a disappointing performance in their showdown with rival Brooklyn?

Head coach Doc Rivers gets the answer on Sunday when the Orlando Magic host Philadelphia in the fourth and final matchup between the Eastern Conference counterparts. The Sixers have won the past seven meetings, including a 116-106 victory at the Amway Center on Jan. 5.

Brooklyn scored 72 first-half points on Thursday, handing the Sixers a 129-100 defeat for their second-worst home loss this season. Only a 48-point setback to Boston on Feb. 15 ranks higher.

Philadelphia went unbeaten during James Harden’s first five games in a 76ers uniform, as the 2018 Most Valuable Player Award winner notched a triple-double against the New York Knicks on Feb. 27. But Harden struggled against his former Brooklyn teammates, finishing with 11 points (3-for-17 shooting) and a -30 plus-minus rating.

Harden believed the 29-point blowout would ultimately benefit himself and his new teammates.

“Since I’ve been here everything has been sweet and we’ve been winning games and so tonight was good for us,” Harden said postgame Thursday. “We get an opportunity to come down to reality, watch film and just continue to get better.”

The Magic have reached the second leg of a season-long six-game homestand that started with Friday’s 118-110 comeback win over the Minnesota Timberwolves.

Orlando rallied from an 18-point first-half deficit to not only end Minnesota’s six-game winning streak, but the Magic also completed a season sweep of the Timberwolves.

The Magic overcame a double-digit deficit to win for the eighth time this season, bettering their 17-point comeback at Indiana on Feb. 2. Head coach Jamahl Mosley’s club has five victories in the past eight games and is in position to win three in a row for the first time this season.

Bamba scored 15 of his game-high 27 points in the first half to go with 12 rebounds for his first career game with 25-plus points and 10-plus rebounds. It was Bamba’s corner three — his fifth 3-pointer of the game — with 1:05 left and dunk off a pass from Carter 22 seconds later that gave Orlando a 116-108 lead.

Carter totaled 20 points and 10 rebounds for his team-high 30th double-double. The last time Orlando had multiple players record 20 or more points and 10 or more rebounds in the same game happened in December of 2018.

Wagner contributed 18 points, going 6-for-6 at the free-throw line and 2-for-4 from beyond the arc, and six rebounds in 13 minutes. Wagner’s dunk with 8:32 remaining gave the Magic their biggest lead at 107-95.

Three-point shooting also played a significant role. Orlando went 1-for-10 in the first quarter but made 15-of-30 triples the rest of the way; Minnesota shot 8-for-33 from long range over the final three quarters following a 7-for-12 start.

“I think we just made the adjustment that was on the game plan from the beginning,” said Magic guard Markelle Fultz, who posted a season-high 14 points and season-best seven assists in 18 minutes. “We know they (the Timberwolves) were going to come in and shoot a lot of threes. Of course, in that first quarter they made a lot of threes. So, our adjustment was just to get them off the three-point line and make them make tough twos or get to the rim with our bigs contesting (shots). We were gonna live with that.”

Philadelphia selected Fultz with the first overall pick in the 2017 NBA Draft. He has played five games this season for Orlando after missing nearly 14 months to recover from a torn left ACL.