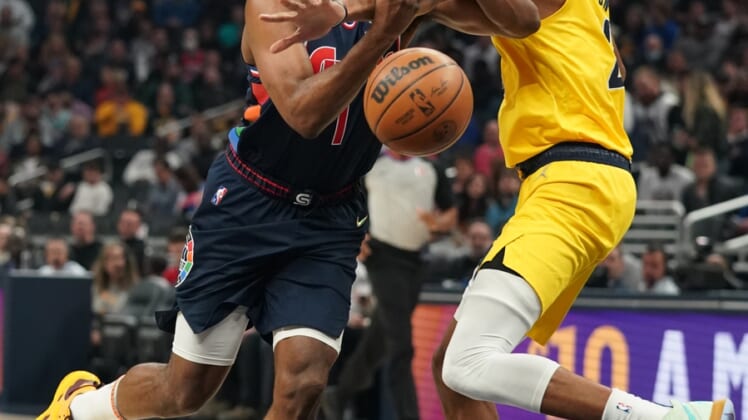 Joel Embiid collected 45 points and 13 rebounds and Tyrese Maxey made a career-high eight 3-pointers to fuel the visiting Philadelphia 76ers to a 131-122 win over the Indiana Pacers on Tuesday in Indianapolis.

Maxey finished with 30 points for the 76ers (49-30), who sank a franchise-best 23 3-pointers en route to notching their third straight victory. Philadelphia had made 21 3-pointers on four separate occasions, including in Saturday’s 144-114 victory over the Charlotte Hornets.

Tobias Harris made five 3-pointers in six attempts to finish with 17 points and James Harden recorded 11 points and 14 assists for the 76ers.

Buddy Hield collected 25 points, 11 rebounds and five assists while Tyrese Haliburton added 21, eight and five, respectively, for the Pacers (25-55), who have lost a season-high eight in a row.

Maxey followed up his three 3-pointers in the first quarter with four more during a 2:11 stretch in the second to give Philadelphia a 74-55 lead with 2:35 to play. Embiid added a three-point play, two interior buckets and a free throw to send the 76ers on their way to an 82-59 advantage at halftime.

Philadelphia set a season high for a half with 17 3-pointers. The total eclipsed its previous high of 14, set during the second half of Saturday’s game.

Indiana outscored Philadelphia by a 40-25 margin in the third quarter and pulled within four after Duane Washington Jr. made a 3-pointer with 8:53 to play.

Undaunted, Embiid sank a pair of free throws and a mid-range jumper to highlight an 11-0 surge to give the 76ers a 124-109 lead. Maxey capped the run with his eighth 3-pointer for the 76ers, who put it on cruise control from there.

Former Sixer T.J. McConnell had two points and five assists in his first game back from wrist surgery. He last played on Dec. 1.