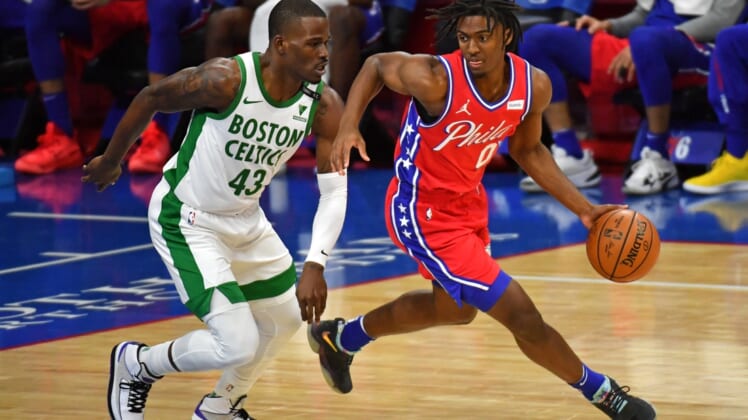 Joel Embiid scored 38 points and grabbed 11 rebounds as the host Philadelphia 76ers beat the Boston Celtics for the second game in a row, prevailing 122-110 on Friday.

Tobias Harris scored 23 points on 10-of-12 shooting and Seth Curry added 15 after missing the previous seven games due to health and safety protocols. Ben Simmons had 15 points and 11 assists, and reserve Dwight Howard pulled down 12 rebounds.

The Sixers improved to 9-1 at home.

Jaylen Brown led the Celtics with a career-high-tying 42 points to go along with nine rebounds while Marcus Smart added 20 points and seven assists. Kemba Walker chipped in with 19 points.

Matisse Thybulle opened the fourth quarter with a 3-pointer from the wing to give Philadelphia a 14-point advantage.

The Celtics responded by scoring the next five points to get within 94-85.

After the Celtics closed within 99-89, Embiid posted up and dropped in a turnaround jumper to push the lead back to 12 with 7:45 to go.

Simmons followed with a three-point play then a steal and dunk, and Harris added a trey for a 111-100 advantage. Simmons contributed another clutch basket and the lead ballooned to 13 with 3:15 left.

Back in the second quarter, Brown hit a twisting layup to give the Celtics a 44-37 advantage with 4:41 remaining. Embiid’s three-point play with 3:05 left cut the deficit to 47-44.

Brown’s 17 points helped propel the Celtics to a 52-49 advantage at halftime. Embiid had 16 points but picked up three first-half fouls.

Following the Sixers’ win over Boston on Wednesday, Smart complained about Embiid flopping too often to the floor. The chippiness continued, especially early in the third quarter in the rematch, as Embiid crashed hard to the court a couple of times without a call by the officials.

The 76ers moved ahead 74-69 with 4:51 left in the third after a difficult trey by Curry from the corner.

Boston committed three turnovers in the final three minutes of the period and trailed 91-80 after the third.