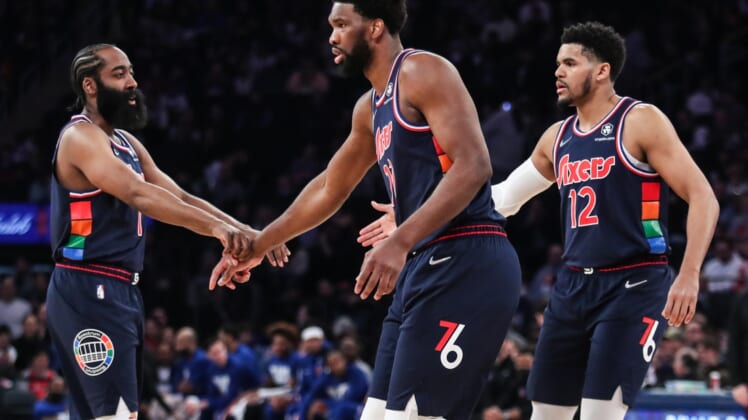 The Philadelphia 76ers became a championship contender when they acquired James Harden.

But they’re far from a finished product.

The Sixers defeated the Cleveland Cavaliers 118-114 on Wednesday, but still struggled for stretches. That’s been an ongoing theme as they have fallen behind early and have had trouble closing out games.

The Sixers will look to maintain their positive momentum when they host the Dallas Mavericks on Friday.

“I’m still trying to find my way,” said Harden, who had 21 points and 11 assists against the Cavaliers. “I still want to be aggressive and just make the right decision because at the end of the day, I am one of the best decision-makers as far as scoring and making the right pass that we have in this league.”

Most Valuable Player candidate Joel Embiid led the way with 35 points and 17 rebounds while playing with a tender lower back. Despite being banged up, Embiid has demanded to be in the lineup.

When he has gone to the bench, the Sixers often have relinquished large leads.

“Just the discussion that we have been having the last few days,” Embiid said of starting games quickly. “We needed to have better starts and be better focused offensively and defensively. Obviously, we did that, but we got to also be focused throughout the game. Keep that same mindset and keep those things.”

The Mavericks will be searching for their fourth win in a row when they visit Philadelphia.

They won in spectacular fashion on Wednesday when Spencer Dinwiddie hit a 3-pointer at the buzzer to defeat the host Brooklyn Nets 113-111.

“I think our growth all season on this journey, you can see our team is growing and maturing and trusting and having fun,” Dallas coach Jason Kidd said. “I thought we missed a big part of our heart and soul tonight. Theo (Pinson) just had a baby, so our energy was kind of down, but I thought the rest of the guys tried to kind of pick it up.”

The hot Mavericks have won 27 of 35 games since Dec. 31 and are continuing to surge at the right time as the playoffs approach.

Dallas won 42 games all of last season. The victory over the Nets was already their 43rd this season.

“We’ve got a great group of young men in there who believe that they can win no matter what the score is, and we’ve gotten better at it,” Kidd said. “If you want to win at the next level you’ve got to be able to deliver, and hopefully we understand what it takes to do that. But I think we’ll grow.

“We’re not done with this road trip. We head to Philly now, but again this is another big win for us,” Kidd added.