7 quarterbacks who could reach 100,000 passing yards 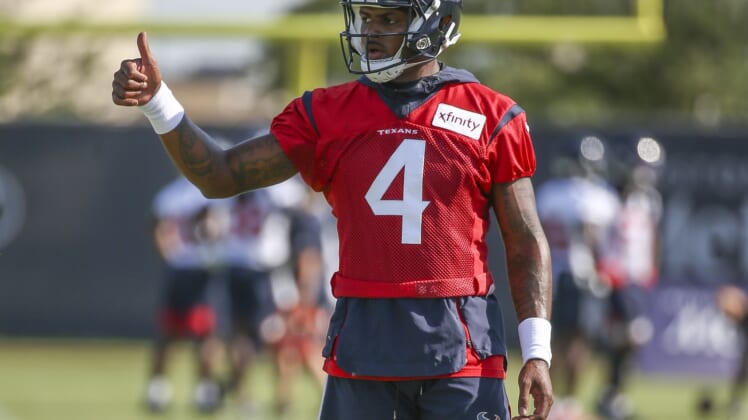 If you look at how the NFL has developed in the modern era, it’s hard to ignore just how vastly different the quarterback position is.

The passing game is now front and center around the league, a clear indication that records we’ve seen in the NFL relating to this position will continue to be smashed.

Look at it this way: Quarterbacks within the top-eight of single-season passing yards all accomplished said feat in this decade. Of those within the top 20, only Dan Marino (1984) and Drew Brees (2008) did so before 2010.

This chart tells us the story. It also leads us to believe that not only will Brees’ career yardage number be surprassed multiple times, but at least one quarterback will reach the 100,000-yard plateau.

Here’s a look at seven options to do just that.

At 42 years old, there’s no telling how much longer this six-time Super Bowl champ will play. What we do know is that he doesn’t intend to give up the gridiron any time soon. Given that Brady is playing at a Hall of Fame level, there seems to be no end in sight to his career. Entering his 20th NFL season, Brady has surpassed 70,000 passing yards. He’ll need to average 4,200 passing yards and play seven more seasons to reach the plateau. Likely? No. Possible? Yes.

NFL quarterbacks have thrown for 5,000-plus yards a total of 11 times. Brees himself has done it five times. This tells us a story of a future Hall of Fame quarterback that has the record books all to himself. After all, Brees’ 74,437 passing yards represents an NFL record. At 40 years old, he’s still playing like he’s in his prime. A mere 25,563 yards separate Brees from that 100,000-yard plateau. We wouldn’t put it past him to reach that mark.

Mahomes, 23, put up nearly 5,100 passing yards in his first season as a starter last year. If we were to calculate, he’d have to reach this plateau for each of the next 20 seasons to reach 100,000 for his career. Given the advancements we’ve seen from athletes recently, including longer careers, this is no longer science-fiction. Barring injury, there’s no reason to believe Mahomes won’t play into his mid 40s. If that’s the case, he might be the likeliest candidate to reach this monumental milestone.

Still only 24 years old and coming off a record-breaking rookie campaign, the sky seems to be the limit for Mr. Mayfield. He has a new weapon in that of All-Pro receiver Odell Beckham Jr., which is only going to help the young quarterback moving forward. Sure his 3,725 passing yards as a rookie doesn’t equate to even coming close to 100,000 passing yards. Even then, we have to realize that Mayfield’s best days are ahead of him. This could lead to him flirting with that number.

Injuries. This is pretty much the only thing that could derail Tua’s NFL career. Entering his junior season at Alabama, the reigning Heisman runner-up is already slated to be the No. 1 overall pick in the 2020 NFL Draft. Boasting a rare combination of athleticism and arm strength, he’s the first in line of a new generation of quarterbacks that will define the league moving forward. Given the propensity for pass-happy offenses we covered before, Tua has to be included in this list. It’s that simple.

Again, injuries could be a concern here. Houston’s offensive line allowed Watson to be hit more than any other quarterback in the NFL as a sophomore last season. This is a problem the Texans must rectify sooner rather than later. Even then, Watson’s first two NFL seasons tell us a story of a quarterback that will dominate in this league for years to come. He put up 4,165 passing yards last season. Bill O’Brien is all about his quarterbacks. As long as the head coach is in Houston long term, last year’s passing yards will be the floor for Watson moving forward.

Goff has tallied nearly 8,500 passing yards over the past two seasons. That trajectory puts him on pace to reach the 100,000-yard plateau some time during his age-48 season. Not happening. But we have to remember that he did just put up 4,700 passing yards in 2018 and is working under one of the most-creative head coaches in modern NFL history, Sean McVay. Sure the Rams might not be sold on Goff long term. That’s fine. But as long as he’s on this team, we’re looking at someone who could very well challenge the mark.