Whether it’s due to free agent acquisitions or other situations on a specific team’s roster, there are certain players currently on the trade block that could be moved here soon.

Some of these players will be traded between now and the NFL draft next month. Others will find themselves dealt during the draft itself. Meanwhile, the rest won’t be moved at all.

From an embattled quarterback in San Francisco to a franchise-tagged defensive lineman in New York, here are seven NFL players set to be traded either before the draft or during the annual event in Chicago.

It just seems like a matter of time before this embattled signal caller is traded. San Francisco has had extensive discussions with both the Cleveland Browns and Denver Broncos regarding Kaepernick.

The primary issues in Cleveland has been the quarterback’s unwillingness to redo his contract and his questions about the Browns’ off-season moves.

In Denver, it’s all about the compensation package the Broncos were offering in a potential trade.

And while reports from San Francisco have recently indicated the team believes Kaepernick will be on the roster, that’s likely nothing more than smokescreen. At this point, it’s safe to assume the two sides have reached the point of no return.

The expectation here has to be that San Francisco will reengage in trade discussions with other teams during next month’s draft, at which point his value could increase substantially.

If the Broncos were to miss out on one of the top-three quarterback prospects by the time they select at 31, the choice would then be between reaching for say Connor Cook at the end of the first round and meeting San Francisco’s asking price for Kaepernick. That’s definitely something to keep an eye on. 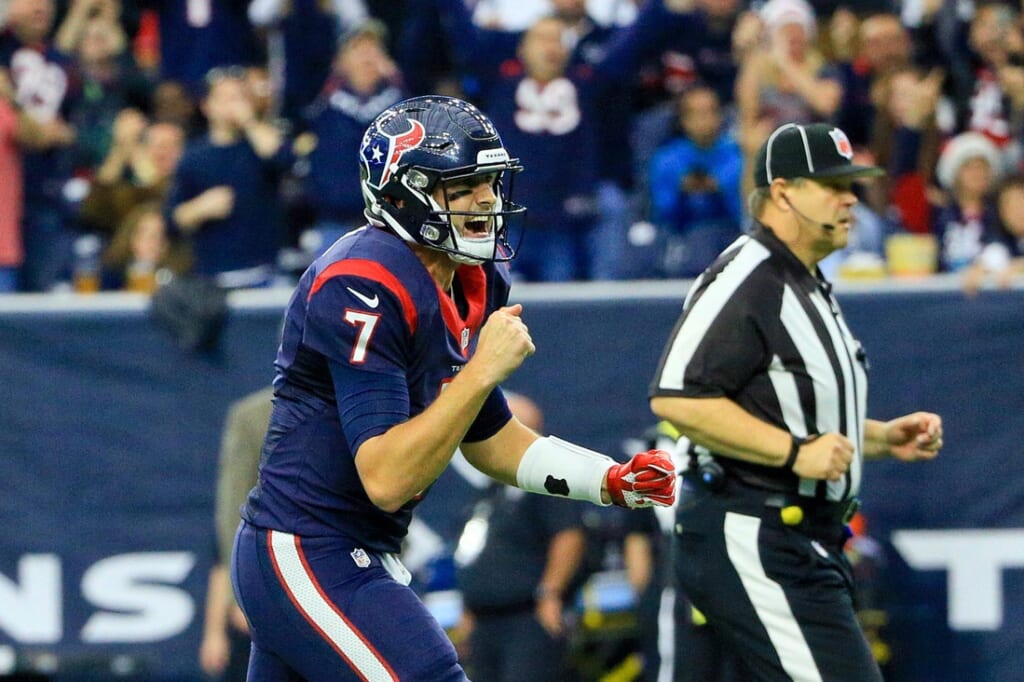 Now that the Texans have committed $18 million annually to Brock Osweiler, it goes without saying that Hoyer is not going to be competing for a starting job. And with Tom Savage potentially prepared to take on a primary backup role, this veteran will likely be put up for auction during the draft.

Set to count $4.9 million against the cap next season, Hoyer is a somewhat expensive backup. He’d also be best suited going to a situation where he can compete for the starting job.

That’s where both San Francisco and Denver might come into play. Depending on how their quarterback situations play out, there could be some interest come draft time. The same could be said for the New York Jets should Ryan Fitzpatrick leave in free agency.

Like clockwork, Thomas has apparently indicated his willingness to be traded. This comes on the heels of a mass free-agent exodus and concerns over the direction of the Browns under their new front office regime.

While Cleveland doesn’t seem interested in trading the nine-time Pro Bowler, he could very easily force the team’s hand. For Thomas himself, the frustration has to be mounting. He has not sniffed the playoffs in nine seasons with the team, seeing Cleveland finish under .500 in each of the past eight years.

Even at 31 years old and with a cap hit north of $10 million, there would be a tremendous amount of interest in Thomas’ services. He’s the best offensive tackle in the NFL today and one of the top players at his position in the history of the game.

If Cleveland were to wait until the draft to trade Thomas, it might net the best possible return. Laremy Tunsil and Ronnie Stanley are considered the top-two offensive tackles prospects in this year’s class. Both should be off the board in the top 10 with Tunsil potentially going No. 1 overall to the Tennessee Titans.

Needless to say, there are more than two teams in need of upgrades at left tackle. There would then be a nice amount of suitors once the top two tackles go off the board early in the draft.

Denver reportedly put Clady up on the trade block after signing fellow left tackle Russell Okung earlier this month. That makes sense considering Clady missed the entire 2015 campaign and is set to count $10.1 million against the cap in 2016.

Among the teams that could potentially be interested in Clady, the Seattle Seahawks are in desperate need of a left tackle upgrade to protect Russell Wilson’s blindside. It wouldn’t be all-too surprising to see them offer a mid-round pick for the veteran.

After being selected second overall in the 2013 NFL draft, this former Texas A&M standout simply hasn’t lived up to expectations. In fact, Jacksonville exhausted a five-year, $39.5 million contract on Kelvin Beachum to compete with Joeckel for the left tackle position.

With Jermey Parnell potentially slated to start at right tackle, the Jaguars might be in position to see if they can get some decent value for Joeckel on the trade market. If he’s not the left tackle of the future, his importance to the team simply isn’t where it once was.

This would be all about Jacksonville receiving solid value for the former top-five pick. If that doesn’t happen, it would be best suited starting both Beachum and Joeckel while pushing Parnell to a swing tackle role.

Signing Rishard Matthews to a three-year, $15 million contract doesn’t necessarily mean that Wright is on the trade block.

Though, the Titans were sorely disappointed with the former first-round pick’s performance this past season. He put up career low numbers in receptions (36) and receiving yards (408).

While Wright’s value is likely at an all-time low, it’s important to note he’s set to become a free agent following the 2016 season. Based on the relationship between the player and the team, it’s safe to assume he will look for other options on the open market. If so, the Titans might be best served getting something for him prior to his contract year.

Coming off a broken leg, it appears Wilkerson isn’t in any hurry signing the franchise tag tender New York handed him earlier this offseason. His agent also didn’t do much to quiet rumors about a potential trade here recently:

There are a bunch of layers to this situation. While the Jets have made it clear they want to retain Wilkerson, the team has also invested a lot on two other defensive linemen, Sheldon Richardson and Leonard Williams. In short, Wilkerson remaining with the team over the long term seems highly unlikely.

Why not attempt to get optimal value for the Pro Bowl performer? If another team were willing to yield a first-round pick in return, the Jets would seriously have to consider it. That’s something we should definitely keep in eye on leading up to and during the draft.