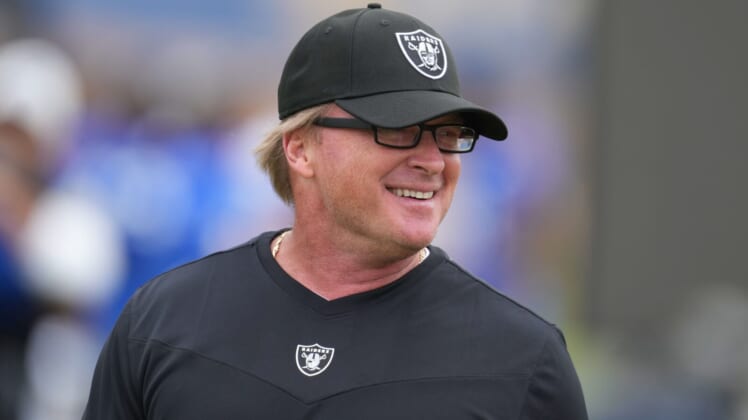 The Las Vegas Raiders will kick off their 2021 season against the Baltimore Ravens on Monday Night Football in front of an electric crowd at Allegiant Stadium. Coming off an 8-8- campaign, the Silver Black has its sights set on the playoffs.

The Raiders have taken small steps toward the ring of playoff contenders, but Mike Mayock expects this team to make a significant jump this year as he feels the rising temperature on his general manager seat.

As is the case with every team, the Raiders will need to maneuver through in-season obstacles to reach the playoffs. For Vegas specifically, young players have to develop quickly in expanded roles and become the backbone of the squad.

Aside from “Just Win Baby,” what must happen for the Raiders to make the playoffs? Let’s take a look at five crucial factors that have to work out in their favor.

Skeptics have their reservations about Vegas’ new-look offensive line.

No need to beat a dead horse here. The Raiders moved on from proven players after the offensive line struggled in the second half of the 2020 campaign. The club will roll out a younger and more athletic group, but that doesn’t necessarily mean an upgraded unit. James, who signed an extension this offseason, Leatherwood and Simpson must prove they can hold their own on the pro level.

If the offensive line jells quickly, quarterback Derek Carr, who’s completed at least 67 percent of his passes in each of the last three years, will have time to pick apart defenses. Running backs Josh Jacobs and Kenyan Drake could challenge Cleveland Browns’ Nick Chubb and Kareem Hunt for best running back duo in the league.

Starting Offensive Linemen Play Most of the Games

Other than click as a unit, the Raiders’ starting offensive line must stay healthy for most of the season. Injuries can become an issue for every team, especially an outbreak at a specific position, but the Raiders don’t have the depth to withstand revolving doors across the offensive line.

Incognito comes into the term on the mend after a significant Achilles injury, which moves Simpson into the starting lineup. Now, Vegas would have to lean on swing tackle Brandon Parker, center Nick Martin and versatile lineman Jermaine Eluemunor to fill in any gaps.

Of course, the Raiders can go through their practice squad and elevate Lester Cotton Sr., Jeremiah Poutasi, rookie seventh-rounder Jimmy Morrissey or undrafted rookie Devery Hamilton, but that’s less than ideal. Only Poutasi has played a regular-season snap among the four, so inexperience would remain a concern within the third wave of offensive linemen.

Jon Gruden selected Henry Ruggs III over every wide receiver in the 2020 draft. Forget about the comparisons to CeeDee Lamb and Jerry Jeudy for a minute; the Raiders head coach and offensive play-caller must make this work with his preferred pick of the litter.

Last year, Ruggs only saw 43 targets, which tied for 156th leaguewide. How did 155 players have more targets than the first wideout off the board last year?

Ruggs needed to make technical and physical improvements during the offseason, but he’s not going to grow into a playmaker without the football. Gruden has to feed him.

While Ruggs brings speed, Bryan Edwards (6’3″, 212 lbs) has the size to win one-on-one matchups with physicality, which may alleviate the Raiders’ red-zone woes. Last year, he played sparingly, partially because of injuries. Nevertheless, as the remaining 2020 third-round pick from a group of three, he has to step up in a starting role alongside Ruggs and Hunter Renfrow.

Defensive coordinators make adjustments, so don’t expect tight end Darren Waller to dominate the competition every week. Following wideout Nelson Agholor’s departure in free agency, the Raiders need another consistent perimeter playmaker to take some eyeballs away from Waller in the passing game.

During the offseason, Yannick Ngakoue made a bold statement.

“I think Maxx (Crosby) and myself are the best duo that is going to hit the scene,” Ngakoue said. “I am already putting it out there.”

Clearly, Ngakoue, who has 45.5 sacks in five years, isn’t short on confidence, but now he and Crosby must generate the pocket pressure to measure up to those lofty expectations.

Ngakoue has a resume that allows him to talk in that manner. Crosby has 17 sacks in two seasons. They should garner respect as a viable tandem in 2021.

Vegas added Gerald McCoy, who shook off some rust and showed he still has more gas left in the pass-rushing tank during the preseason. The six-time Pro Bowl and All-Pro defensive tackle recorded at least five sacks in eight consecutive terms (2012-19) before a quad injury derailed his 2020 campaign.

The Raiders have three guys who can hunt down the quarterback, making it a little easier for a young secondary to capitalize on errant or hurried throws from the pocket.

Speaking of the secondary, new defensive coordinator Gus Bradley and defensive backs coach Ron Milus have to optimize the talent within the cornerback and safety groups.

Mullen and Abram are third-year pros; both have significant room for growth. Moehrig and Hobbs will play critical roles at safety and slot cornerback, respectively, right out of college. A nickel package with five defensive backs accounts for 80 percent (4/5s) of the secondary.

Obviously, the Raiders would like to see second-year cornerbacks Damon Arnette and Amik Robertson take some steps in their development as well. They’re expected to provide depth for now.

As a head coach and defensive coordinator, Bradley has fielded a top-10 pass defense in each of the last five seasons, which bodes well for a young talented group that may have just needed better direction from the coaching staff.