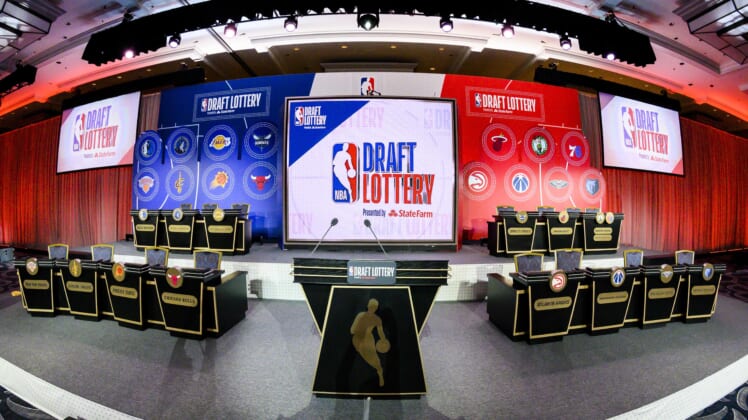 Heading into the annual NBA Draft Lottery set to take place prior to the start of Tuesday night’s Eastern Conference Finals matchup, there is no top consensus, LeBron James, Zion Williamson, or otherwise top-regarded No. 1 prospect in the incoming class.

Instead, there are several players who help compose a strong top half of the lottery.

Whether it’s Chet Holmgren’s length and skill that impress, or Jabari Smith’s scoring prowess that intrigues, there’s plenty of talent to go around.

Despite not having a generational prospect everyone agrees should be the first player off the board, teams are still as eager as ever to land the top pick in the 2022 NBA Draft.

Here are the five teams who are in the most desperate need of either winning or improving their lottery standing later tonight.

Related: NBA Draft lottery: Date, time, odds and everything you need to know

Although their 2021-22 season didn’t get the results the Detroit Pistons wanted, they head into the offseason with a strong chance to improve their roster. Aside from the expected growth from Cade Cunningham (20 years old) and Saddiq Bey (23), they also have the second-most cap space in the NBA.

The Pistons will be better than their 23-59 record next year, but winning the lottery, and pairing Cunningham and Bey with a player like Holmgren could put them on an entirely new future path that gives them a chance to quickly become one of the better teams in the East. They’d be an extremely popular NBA League Pass choice heading into next season.

Despite many chances, the Sacramento Kings haven’t been able to find a franchise cornerstone capable of elevating the squad to the playoffs. Trading Tyrese Haliburton was not a popular choice among the fanbase, but they did at least land a proven NBA All-Star, getting Domantas Sabonis in return.

Still, Sabonis and De’Aaron Fox aren’t going to bring this team to the playoffs any time soon. Winning the lottery might be their best chance at quickly turning this roster around under new head coach Mike Brown. It really doesn’t matter who their top choice may be, no one on this roster should be considered untouchable, they already traded Haliburton.

Gregg Popovich finds his next protege

One of the most successful NBA head coaches of all time and the winningest coach in the Association’s history, Gregg Popovich has experienced some recent trouble, missing the playoffs in each of the past three seasons. Prior to his recent misfortune, Pop’s teams enjoyed a 22-year consecutive playoff run since he took over as the full-time coach at the start of the 1997-98 season.

Now, the Spurs are without a star. Dejounte Murray is a very talented player, but he’s not among the top-25 in the NBA. Winning, or even improving their lottery position gives Pop a chance at finding the next moldable athlete who’s ready to become a superstar.

Once it was clear Damian Lillard would miss the rest of the season after playing just 29 games, the Portland Trail Blazers appeared to go all-in on an end-of-the-year tank effort. They traded CJ McCollum in an effort to clear cap space, where they’re set to have over $20 million in space, but Anfernee Simons is set to receive a large chunk this offseason.

Still, the Blazers may be at a bit of a crossroads with Lillard. If they’re not ready to compete for a playoff spot next year, Dame Time may be no more, at least not in Portland. While he’s never wavered on his love for the franchise and the city, one can only take so much losing. That’s why adding another top piece to a core with plenty of potential could help turn the future around.

Perhaps the team in most desperate need of improving their lottery standing, even if they’d have to overcome long odds to do so, is the New York Knicks. After an unproductive year from Julius Randle, there is no clear-cut in-house leader on the team. RJ Barrett and Obi Toppin may be the future in the Big Apple, but without building around their young stars, this team won’t go anywhere.

Even if Tom Thibodeau doesn’t typically rely on rookies, he’d have no choice if the Knickerbockers managed to land a top-three pick. Fans would finally have a reason to pack the Garden once again starting next season.