5 takeaways from Raiders loss to 49ers 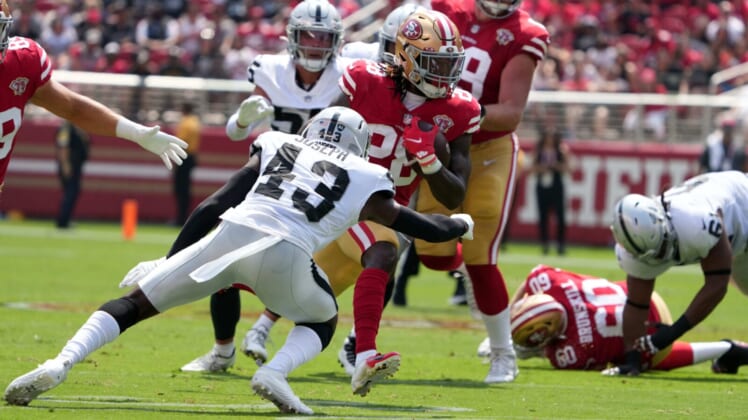 For the Bay Area Raider Nation who made it out to Levi Stadium, God bless you. The Las Vegas Raiders playing mostly second and third-string players fighting for roster spots, never found a rhythm and lost to San Francisco 34-10 at Levi Stadium.

With the Raiders final roster cuts coming on Tuesday, the game included all Raiders reserves as coach Jon Gruden left 20+ of his players in Las Vegas for the final tune-up before the 2021 season. Here are four key takeaways from Sunday’s action leading up to the Raiders 2021 opener against the Baltimore Ravens on Monday Night Football at Allegiant Stadium on September 13.

Except for Jimmy Morrissey and some early time by Brandon Parker, the Raiders reserves on the offensive line could not stop the San Francisco front all day. Lester Cotton played well at times but Jaryd Jones-Smith, Patrick Omameh, Jeremiah Poutasi and John Simpson struggled to contain the 49ers’ defensive front and protect quarterback Nathan Peterman. The good news: the Raiders younger starters who played in the first two preseason games looked good previously, but depth will continue to be an issue should Las Vegas sustain any injuries to the frontline starters.

Nevin Lawson and Isaiah Johnson are in trouble

While it was a bit telling to see last year’s first-round draft pick Damon Arnette on the field with reserves, he held his own and played a good game when he saw playing time. Nevin Lawson and Isaiah Johnson, on the other hand, did not. Eight-year veteran Lawson struggled the entire game and his time with the Raiders may be coming to an end. Johnson, a fourth-round pick out of Houston in 2019, also struggled and could be an odd-man-out for a Raiders defensive backfield full of young talent. Also, seeing Karl Joseph play as many snaps as he did could be a surprise cut Tuesday, although he did have some nice plays against the 49ers.

Trey Ragas continued his impressive 2021 preseason rushing for 39 yards on 9 carries and has outperformed BJ Emmons. Ragas has played well enough to make the 53-man roster. Emmons fumbled in the first half and was lucky the Raiders could retain possession after the miscue. With veteran RB3 Jalen Richard still injured, Ragas would be a surprise cut or assigned to the practice squad. With Josh Jacobs and Kenyan Drake ahead of him, playing time won’t be significant, but he could carve a nice role for himself into the regular season.

Gerald McCoy still has it

I know, I know – it’s one preseason game. But watching him off the ball and the quickness of his feet and his moves, McCoy could be a real game-changer for Gus Bradley’s defense. He has to stay healthy and fresh at his age, but his performance in San Francisco really impressed me. He’s a six-time Pro Bowler and has to be the starter inside with Johnathan Hankins. His leadership in the locker room has already been well documented, but his presence on the Raiders front could end up being one of the best decisions of the offseason. He hasn’t played in a while, but McCoy could be the “it” factor and the player that could turn things very rosy upfront. Adding Yannick Ngokue on the EDGE, opposite Maxx Crosby, the Raiders defense could finally make the jump we’ve all been waiting for.

Nate Peterman benefited from starting and playing the entire preseason

While those who actually believe Nathan Peterman should compete for a starting role are looney, I will tell you this: Peterman benefited from playing all three games during this preseason. Peterman finished 18-of-29 for 175 yards, one touchdown and one interception. He won’t get another snap with Derek Carr and Marcus Mariota ahead of him unless something drastic and catastrophic happens this season. But, if the unthinkable happens, the snaps and his excellent performance bode well should he need to step in. No one wants to see that happen, but the solid film should make Gruden and company feel better should suitors come calling for Mariota or Peterman.