5 stars who will prove haters wrong during 2021 NFL season

Some stars take too much heat. Well in advance of the 2021 NFL season, let's look at five prominent players who have the means to prove their haters wrong.

The 2021 NFL season is still a ways off, but there’s still plenty of talk regarding certain stars in the offseason who are believed to be hot garbage on the gridiron by their haters.

Some of these high-caliber players are honestly not in the best positions to succeed, and some legitimately deserve to be put on blast. However, there are others who are in an ideal situation to silence their detractors with exceptional years.

Here are five stars who are bound to prove the haters wrong this coming NFL season — and surprise, surprise, the focus is on the quarterback position.

Cam Newton isn’t even guaranteed a starting job necessarily, which is precisely why featuring him here makes sense.

Newton has taken a lot of heat throughout his time in the NFL — some of it deserved, much of it not.

Prior to coming down with COVID-19 last season, Newton played well considering how late in the offseason he signed with New England. Oh, and the Patriots’ lack of skill position talent was downright embarrassing.

But that’s nothing new for Newton. He used to put on his Superman cape for the Carolina Panthers and drag awful receiving corps and suspect offensive lines to the playoffs.

Some will argue the former MVP is washed up. Give him one more shot. The Patriots and Bill Belichick are. And before you write him off and point to Mac Jones as reason to lose faith, let’s see what Newton can do with actual weapons in Jonnu Smith and Hunter Henry at tight end.

The receiver position still leaves something to be desired in Foxborough, yet Belichick has given Newton enough to shut up the multitude of haters who root against him. 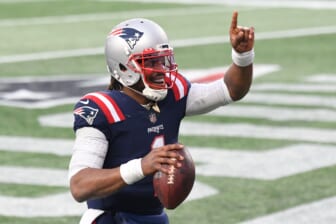 The best way for reigning No. 3 overall draft pick Trey Lance to expedite his development is to play as much as possible as soon as he’s ready. Expect Jimmy Garoppolo to make it very difficult for the first-year signal-caller to see the field.

Some may argue Jimmy GQ looks more like a star than he plays like one. While possibly true, that doesn’t mean Garoppolo is a slouch on the football field whatsoever.

The one season he’s been with 49ers head coach Kyle Shanahan and remained fully healthy, Garoppolo went 13-3 as a starter, posted a 102.0 passer rating, averaged 8.4 yards per attempt and completed 69% of his passes. He was one deep throw away from being a Super Bowl MVP, too.

Garoppolo knows the situation. He has struggled to stay healthy. It’s a real concern. That’s why San Francisco went to get Lance. It wasn’t so much an indictment of his play.

There’s no denying Lance has incredible, tantalizing upside. That said, Garoppolo has a championship-caliber roster, a genius offensive coach and top-flight rushing attack to help him rebound in a massive way. 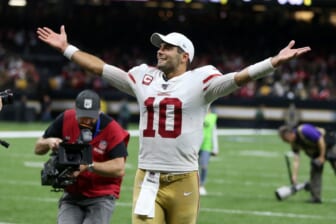 It’s going to be Year 2 for Baker Mayfield in reigning Coach of the Year Kevin Stefanski’s offense. Mayfield is a lightning rod, in some ways similar to Newton, for playing with a chip on his shoulder, exuding passion and being outspoken.

Forgive the former No. 1 overall pick for struggling at points during his young career. Mayfield didn’t enter an NFL paradise. Cleveland was a wasteland where quarterbacks were destined to fail until he arrived.

Prior to last season, Stefanski became Mayfield’s third different full-time NFL head coach. The Browns have stability for a change, not to mention an absolutely loaded roster. Beating inferior opponents in bad weather conditions in 2020 clouded the fact that Mayfield was starting to put everything together.

If Odell Beckham Jr. comes back healthy and contributes the way he’s capable of, now that everyone’s familiar with Stefanski’s system, it feels like the sky is the limit for Mayfield. He loves sticking it to the haters as much as anyone, so this should be fun to watch.

It’s time to acknowledge that Kirk Cousins is a fine, well-above-average starter.

Minnesota has had a revolving door at offensive coordinator since Captain Kirk arrived in 2018. Yes, there have been similar systems, yet it’s been a different play-caller every year. Cousins saw his most dependable receiver, Stefon Diggs, demand his way out of town.

The wily veteran hasn’t wavered, has pushed through tough times, and even defeated the New Orleans Saints in the Superdome in a playoff game with clutch throws to seal the deal.

After one of the worst stretches of his career amid a 1-5 start, Cousins rallied the Vikings to a 7-9 record in 2020 and still finished as Pro Football Focus’ 11th-ranked passer a year after placing sixth in overall grade.

The Vikings’ trademark stellar defense was a sieve last season, which was more to blame for their failure to reach the postseason. Minnesota should be revamped on defense and brought in an excellent draft class, including Cousins’ potential replacement, Kellen Mond.

Even though he’s still under contract through 2022 and getting paid handsomely, some seem eager to kick Cousins to the curb as quickly as possible. Don’t be shocked when he leads the Vikings back to the playoffs this season.

Jeepers, does Daniel Jones get a lot of hate. The spotlight is especially bright in New York, and yes, Jones has coughed up enough fumbles to be deserving of such vitriol. But Saquon Barkley may catch just as much grief since he’s struggled with injuries and, as a result, hasn’t lived up to his billing as a No. 2 overall pick.

Then again, have the Giants really given Barkley a chance? He was thrust into an unfavorable situation from the jump, and the offensive line is still a big question mark.

But New York went hard this offseason to help the passing attack, signing Kenny Golladay in free agency as a new No. 1 receiver and drafting Florida wideout Kadarius Toney in the first round.

With a more balanced offense, provided Jones can take a modest step forward, Barkley’s running lanes and space to make plays underneath as a pass-catcher will open up in a big way.

This man averages 115 total yards from scrimmage per game when he’s in action, so don’t sleep on Barkley sticking it to those who don’t believe he’ll be the same after missing 14 games in 2020 with a torn ACL.