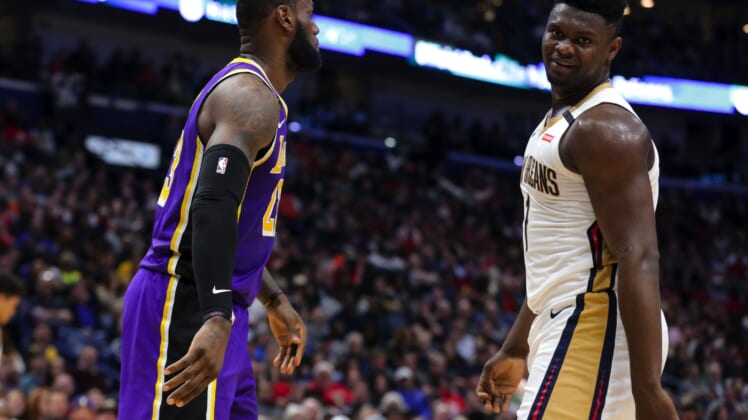 July 31. Mark it on your calendars. The NBA will resume a season that has been suspended since back on March 11 at Walt Disney World in Orlando.

A total of 22 teams will return to action, including title favorites in that of the Los Angeles Lakers and Milwaukee Bucks. Meanwhile, young stars are set to show out in a big way. These are among the reasons we should be excited about the NBA season returning.

Sports is actually back

Sure we have the UFC, NASCAR and enjoyed a fun charity golf match. That’s fine. But the sports world is pining for the return of actual games and team sports. Given that Major League Baseball and its players are at a standstill and without a clear date for the NHL’s return, it seems like the NBA will be the first team sport to return.

It’s a real opportunity for the NBA. Even with games being played without fans in attendance, the resumption of the season will be the talk of the sports world. Let’s hope they knock it out of the proverbial ballpark.

Prior to the season being suspended back on March 11, this rookie No. 1 pick was the talk of the Association. Williamson, 19, averaged 23.6 points and 6.8 rebounds on 59% shooting from the field in his 19 games after returning from a knee injury that cost him the start of the season. He was on an historical pace at that point.

What’s even more exciting here is that the NBA’s current format gives Williamson and his Pelicans a fighting chance to earn a trip to the playoffs. They are currently the 10th seed in the Western Conference with a 28-36 record. If New Orleans is the ninth seed and four games or less out of the eighth spot after the eight remaining regular-season games are played, it will then take part in a two-game play-in tournament. How fun would that be?

NBA legend Jerry West recently indicated it would be a whole lot fun if these two Los Angeles-based teams were to meet in the Finals. That’s not going to happen now that the Association has opted to go with the traditional playoff format. Even then, the idea of the Lakers and Clippers potentially meeting in the Western Conference Finals is all sorts of sexy.

LeBron James and Anthony Davis going up against reigning NBA Finals MVP Kawhi Leonard and Paul George, the latter two being Southern California natives. The second-largest media market in North America. Two teams who share the same arena. A rivalry rekindled. What’s not to like about this?

I focused on Zion Williamson earlier, but he’s just one young star in an Association filled with next-generation talent. Rookie Ja Morant has his Memphis Grizzlies in playoff position. He’s been extraordinarily fun to watch this season. Dallas Mavericks super sophomore Luka Doncic is now 100% healthy after struggling with ankle injuries earlier in the campaign. Before said injuries, he was a legit MVP candidate.

Back east, Jayson Tatum of the Boston Celtics and stud forward Pascal Siakam of the Toronto Raptors have shown out big time this season. Heck, the Miami Heat themselves have multiple youngsters who have helped the team into title contention. This is certainly a reason to be excited about the season resuming late next month.

Sure the Toronto Raptors have an opportunity to repeat as champions. Though, the Milwaukee Bucks have to be seen as the overriding favorites to come out of the conference. If not, Milwaukee the Boston Celtics find themselves in a situation where they can earn a trip to the NBA Finals.

Out west, it’s the same story. The five-time defending conference champion Golden State Warriors are done with their season after posting the worst record in the NBA. This means that another team will come out of the conference for the first time in a half decade. Even if the Warriors return to championship contention in 2020-21, this season proves that we’re in the midst of a new era.