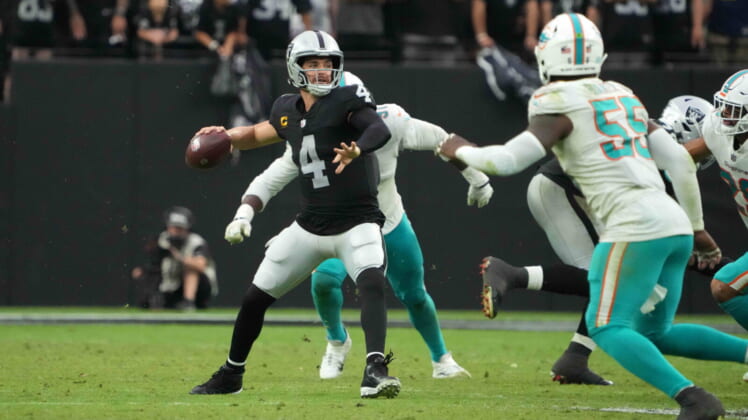 Finding key Las Vegas Raiders takeaways from this up-and-down thriller isn’t hard as the Silver and Black are 3-0 for the first time since 2002 after an excruciating overtime 31-28 win over the Miami Dolphins. While there is no such thing as an ugly win, this one had many ups and downs, with the Raiders skirting disaster in regulation and overtime.

Still, budding playoff teams find a way to win even when things aren’t clicking on all cylinders. With a marquee AFC West matchup with the Los Angeles Chargers in LA on Monday Night Football next week, a loss against Miami would have been crushing.

Instead, this gutsy Raiders team – lead again by quarterback Derek Carr and a new stingy defense – found a way to win to the delight of the hometown crowd at Allegiant Stadium. Here are 5 Raiders takeaways from the big win over Miami.

Over the past few years, Raiders fans would be the first to tell you games like that usually ended with their team losing miserably. But not anymore and not with this new Raiders squad. The ability of this team to deal with adversity and overcome it has a different feel to it and that resilience is the hallmark of teams who make it to the post-season. No one is crowning the Raiders a playoff team yet, but after three games, there’s no question the young players on this team are all in and gaining confidence each week. There will be losses and peaks and valleys this season, but you get the sense this team will not just crumble despite it. That bodes well for playing in January and is one of our strongest Raiders takeaways from this game.

Raiders takeaway #2: Barber proves his worth

When it comes to Raiders takeaways from the Miami game, this was a surprise. I was the first one to cry about Peyton Barber getting more carries than Kenyan Drake. By the end of the game, as I compiled my key Raiders takeaways, I had to eat my words happily. After not being able to run the ball in the first half effectively, Barber broke through in the second half to finish the day with 111 yards rushing on 23 carries. Barber earned the playing time as it appeared Drake failed to pick up the pass rush earlier in the game. Gruden confirmed Barber earned the time because he was making all his assignments. “He ran the ball well, didn’t miss any assignments and that’s why I just gave him a game ball,” Gruden said after the game.

Raiders takeaway #3: Derek Carr continues to lead and play like an MVP

Despite the Raiders slow start — and his early pick-six —Derek Carr again played like an early MVP candidate. We might as well just make Carr a permanent resident on the Raiders takeaways list. Carr finished the Dolphins win 26-of-43 for 386 yards, two touchdowns and one interception. Carr’s ability to lead his team back from slow starts, mistakes and miscommunications, has been a hallmark of his this year and the confidence in himself and his team is clear. He shows patience and presence in the pocket and his calming influence with his young team on offense is vital. Carr performed well despite some struggles with center Andre James and high snaps. Even when those disrupted his rhythm, Carr hung in and didn’t turn the ball over or make any critical errors. “We have a good football team,” Carr said after the game. “We’ve yet to play great in all three phases, though. We’ve yet to play our best football.”

Why do I feel this could also be a Raiders takeaways candidate every game in the first half of the season? Henry Ruggs III and Bryan Edwards not only continued to contribute, but they’re flat-out doing it when it matters the most and the game is on the line. Edwards, again, game up big in overtime and finished the game with three receptions for 89 yards and Ruggs caught four balls for 78 yards. Both receivers are getting open and Carr is trusting them more and more. That bodes well as the team’s best receiver, Darren Waller, continues to

In all three wins, the Raiders have had to overcome deficits and slow starts on offense. With a tough game against the Los Angeles Chargers on Monday Night Football for Week 4, Gruden and Carr need to figure out how to avoid slow starts. Gruden blamed some of the slow starts on execution but admitted they don’t exactly know but did admit it has to be figured out quickly. Facing the Chargers, and then fellow 3-0 Denver Broncos, two of the next three weeks, the AFC West title could very well be set over the next several weeks. Two matchups with the struggling Kansas City Chiefs are also down the line. Either way, the Raiders finish strong, but their defense is bound to struggle at some time during the season, meaning the offense will have to carry them to victory as well.