5 players who could be traded before MLB trade deadline 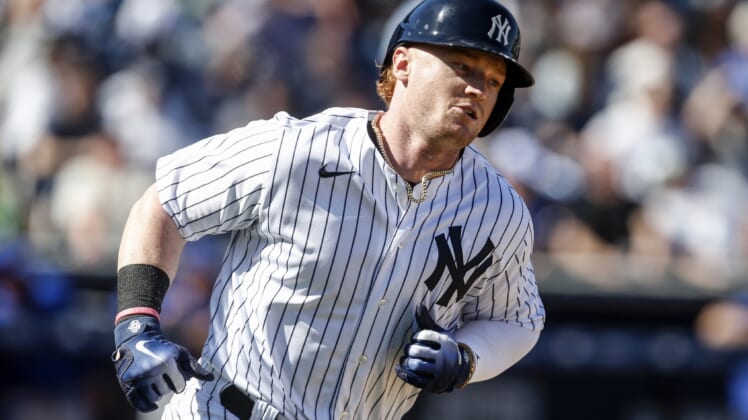 The MLB trade deadline is fast approaching, with teams fighting for playoff positioning amid a shortened 60-game season with postseason spots up for grabs. In a year that has already been full of surprises, we could see some big names move at this year’s deadline.

This year’s trade deadline will be different due to numerous factors influencing deals that will and won’t be made. While we might see fewer trades this season due to the cancelation of the MiLB season and teams taking massive revenue hits, there should still be a few big names moved by the deadline on Aug. 31.

The New York Yankees could be very active in pursuit of a World Series title, while NL clubs will be seeking pieces to compete with the Los Angeles Dodgers. With the standings closer than ever, things will be interesting.

With the MLB trade deadline fast approaching, let’s take a look at five players who could be traded in blockbuster deals.

If it were up to the fans, Frazier would be in New York’s lineup for years to come. However, we’ve seen the organization isn’t quite as high on the talented outfielder. The team shopped him at the trade deadline last season and kept him off its Opening Day roster this year despite a strong performance in spring training.

We know what Frazier is capable of when given a chance. After finally being called up, he hit a home run and a double in his first start. The Yankees are deep in the outfield, but Frazier would be the perfect long-term addition for numerous other clubs. New York needs pitching and if the right starter becomes available, it could be a win-win deal for everyone.

Arizona came into the season with big expectations after an aggressive offseason that reflected a win-now mentality. Nearly one-third of the way into their schedule, it’s becoming apparent the Diamondbacks aren’t a serious contender. It would be wise for the front office to start selling off assets and stocking the farm system.

The first move player to go should be Robbie Ray, who offers tantalizing upside as a starter but continues to struggle with his command. The Diamondbacks might be selling low on Ray, who holds a 10.59 ERA and 7.41 BB/9, but it would be better than losing him for nothing in free agency. As for Ray, a change of scenery could help him rediscover the form that led to a 2.89 ERA with 218 strikeouts in 2017.

The Pirates are the worst team in baseball and general manager Ben Cherington understands the task facing him. The ship needs to be rebuilt entirely and a new crew needs to be assembled for the future. Pittsburgh already traded away Starling Marte, now it’s time for Bell to get moved elsewhere.

Bell is on the trade block, but the Pirates would love if he could do them a favor and heat up at the plate. He made the NL All-Star team in 2019 after posting a 1.024 OPS with 27 home runs in the first half. Since then, he has a .732 OPS with 12 homers and a .228 batting average in 250 at-bats. He’s still plenty talented and under contract for three seasons, so clubs like the Washington Nationals and Texas Rangers would be very interested.

It’s time for the Red Sox to enter a transition. Frankly, it should have happened this offseason immediately after they traded Mookie Betts. With the club now sitting at the bottom of the standings, chief baseball officer Chaim Bloom should turn the Red Sox into sellers at the MLB trade deadline.

Martinez could opt-out after the season, but he would risk turning down $19.35 million and hoping to surpass the $38.7 million he’s owed over the next two years. Quite simply, Boston can’t take the chance either way. With both leagues having the designated hitter, the market for Martinez should be stronger. If the Red Sox can get a good prospect for him, Martinez should be out of Boston before the month is over.

The Astros have some incredible talent and they nearly won two World Series titles in the past three years. However, this team can’t stay healthy this year, it boasts the fourth-highest payroll and the farm system is in bad shape.

Cy Young award winner Justin Verlander is out indefinitely and star closer Roberto Osuna is unlikely to return this year. On top of that, this club already had an alarming lack of pitching depth. Quite simply, they are not a contender this season.

Given where they stand, trading Springer is the logical move. He’s headed for free agency this offseason and they likely won’t be able to match what other teams offer. Better to trade him for quality prospects now than to receive a compensatory pick next year.