After being hyped up by the national media heading into the NFL draft, those with the greatest expectations often fall the hardest. Every draft class has a handful of players who come into the league with Rookie-of-the-Year labels on their backs before the games ever start but fail to deliver.

It’s not really their fault, either.

NFL draft gurus on big stages get really excited about certain players, pumping up their worth to the general public and putting unreasonable expectations on players who aren’t ready to deliver.

Take a gander at these hyped rookies who’ll struggle to deliver this season. 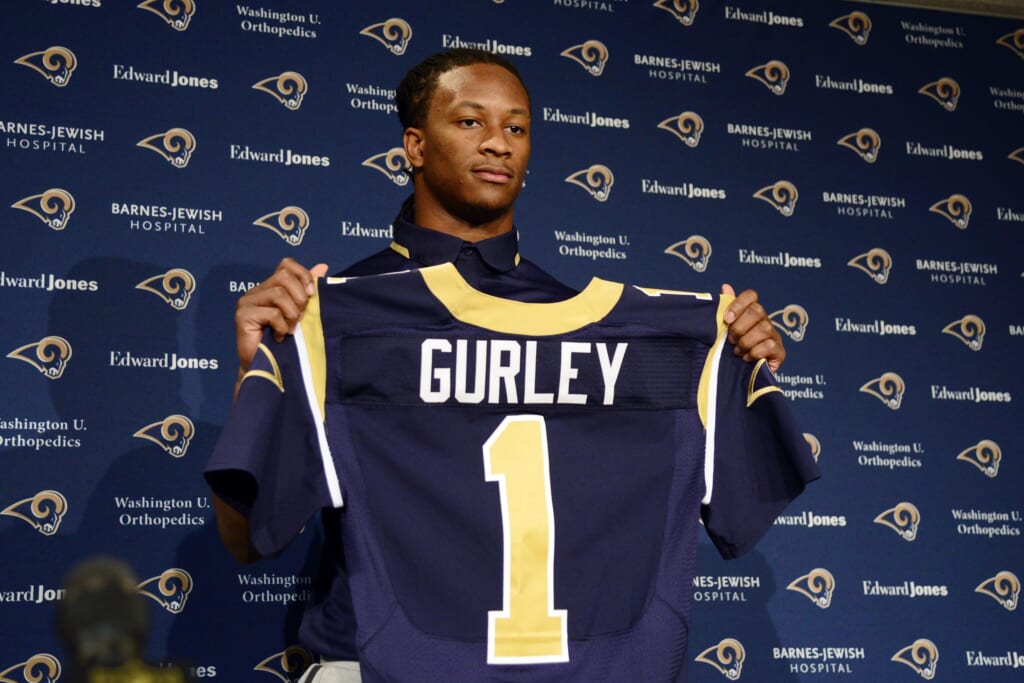 Ok, before we get any further, yes, Gurley could very well start the season on the PUP (physically unable to perform) list as he rehabs from his ACL injury from last year.

Timeline I was told on Todd Gurley (ACL) involves him being ready for week 2 of training camp. Candidate to start camp on PUP list

Should this occur, Gurley won’t even see the field at the earliest until Week 7 (Week 6 is the bye for St. Louis), when the Rams travel to Cleveland to face the Browns.

Gurley’s inclusion on this list isn’t an indictment on his potential as an NFL pro—heck, I’d love nothing more than to start a budding franchise with him as my workhorse. Rather, it’s an indictment on the fact that the Rams are fated to play some teams in the second half of the season with brutally tough run defenses.

Cincinnati and Arizona are both tougher than that, really. The injury bug bit both teams bad last year, which had a lot to do with the pedestrian run-stopping numbers, but they are perennially difficult to run against. The Lions lost Ndamukong Suh but gained Haloti Ngata—pretty much a wash in terms of stopping the run.

At Baltimore, Seattle and San Francisco is the real kick in the gut as it relates to Gurley’s chance to put up big numbers in his rookie campaign. All three defenses are stacked up front with deep, talented defensive lines that control the line of scrimmage. This allows their linebackers and safeties to quickly fill any holes that develop, enveloping ball-carriers quicker than a frog sticks a fly.

Oh, and the worst part for Gurley?

All of this adds up to a mediocre showing for the former Georgia Bulldogs star, who will take a lot of beatings in his young career playing in the NFC West.

Whereas Gurley made it here because of his schedule, Waynes is on this list because he’s truly been overrated.

When watching him on tape, what I see is a lithe athlete who has plenty of speed but who isn’t really instinctive, nor is he physical. He’s all about finesse, which doesn’t bode well playing in the NFC North, where monsters like Calvin Johnson, Alshon Jeffery, Kevin White, Jordy Nelson and Devante Adams roam.

He was a revelation at the combine for the guys at ESPN, where he ran his 40 in 4.31 seconds—blazing, under any circumstance.

The problem, and this wasn’t really highlighted well on big-media platforms, is that Waynes struggled in short-area quickness and change of direction. He finished the 3-cone drill with a time of 7.06 seconds, well into the bottom half of performers for his position. He also posted a 20-yard shuttle time of 4.39 seconds, which was the third worst number among defensive backs.

So, not only is Waynes not physical but he isn’t going to stick with the short-burst slot guys who can double-move a pick-pocket out of his stash, either.

In short, he’s really going to struggle this year, and the Vikings will struggle to fit him into a defined role.

Armstead was, to me, not a value pick at No. 15 overall. At No. 17, however, and adding into the equation the two additional draft picks 49ers general manager Trent Baalke landed out of the deal with San Diego to move down, it was a tremendous value.

Considering he didn’t make a commitment to football until his sophomore year, it’s not surprising Armstead is incredibly raw. And his frame, at 6’7″ and just shy of 300 pounds, is tremendous. He has a bright future as an anchor on the team’s defensive line.

That said, Armstead isn’t going to make much of an impact at all for the 49ers this year.

If Justin Smith decides to return for one final hurrah, the former Oregon Duck might not hit the field at all. Smith is set to visit team facilities on either May 13 or 14, per Baalke, who hopes to finally have an answer.

Darnell Dockett will likely start in the vacated spot left by Ray McDonald, who is now with the Chicago Bears after being let go last season in the midst of a sexual assault probe. If Smith doesn’t come back, expect Tony Jerod-Eddie and Tank Carradine to split snaps in his stead.

The 49ers will bring Armstead along slowly. Head coach Jim Tomsula, who was the team’s defensive line coach previously, has a long history of holding players back until they truly understand the team’s scheme and are consistently able to stick to their assignments. He did it with McDonald and he has most recently done it with Carradine, who many still believe has an excellent chance to become a dynamic player.

Tomsula seems to understand that Armstead is a project, as his post-draft comments indicate:

Also, as we’re all talking and I’m listening to you talk to Trent, we’re not in a situation where Arik has to come in and plug,” Tomsula said, as transcribed by ninersnation.com. “So, this is a place where we can bring a guy in that hasn’t had those years in the weight room. That was playing basketball, who’s still young in what he’s doing. And traditionally here, when you come in it takes some training. So, we have that in that room where he’s added. It’s not the stress of a guy coming in and having to fill a hole.

Like so many draft picks before him, Armstead is one of Baalke’s projections. Some are brilliant, while others fizzle (*cough* A.J. Jenkins! *cough*).

This isn’t to say the young man is doomed to failure. Not at all. Personally I have high hopes for him. Armstead may end up becoming synonymous with J.J. Watt at some point, and it might happen soon. 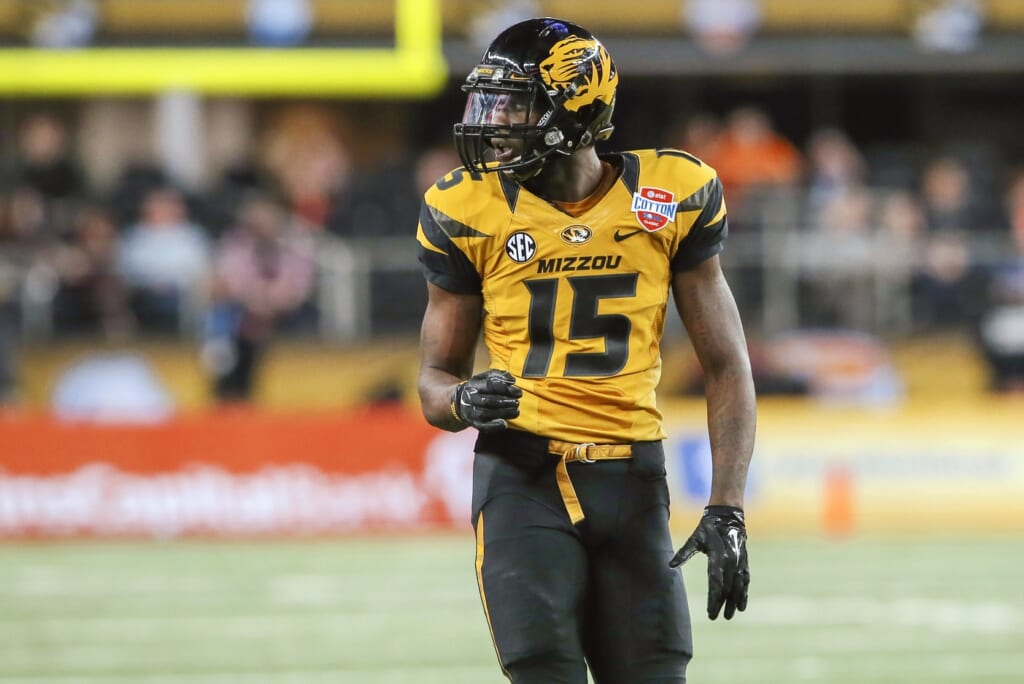 Courtesy of USA Today Sports: Despite all the physical talent, Green-Beckham will struggle early.

Nobody will ever argue Green-Beckham isn’t a physical speciman. At 6’5″ and 237 pounds, it doesn’t get much more ideal when you’re trying to draw up a perfect No. 1 wideout. And if you’ve watched one of his highlight reels, then you understand why so many people have been drooling over his potential.

There is no lasting career for those who fail to develop their craft, and to this point in his career, Green-Beckham is severely lacking any nuance or basic knowledge of the pro game.

We had him in for a visit and put him on the board and he was completely lost,” an AFC offensive coordinator said, per Green-Beckham’s NFL.com draft profile page. “Whoever takes him better have a plan for him because it could be rough early on.

He’s going to likely be competing with veteran Justin Hunter, who has a couple of years under his belt, and nobody should expect the rookie to win that battle. His best chance to have an impact this year will be in red-zone situations, where his height and ball skills will serve him well.

Another strike against Green-Beckham this year is Marcus Mariota, who is almost certainly going to be the team’s starter. Mariota has plenty of talent but is likely going to struggle, as all rookie quarterbacks do. He’s also going to be learning how to play the pro game on the fly, having been brought up in a gimmicky offense at Oregon.

If Green-Beckham can keep himself out of trouble, then fans should be excited about him coming into his own in 2016 or 2017. He has too much to learn to become a viable starter this year, and nobody should be surprised if he ends up with less than 30 receptions during his rookie campaign.

The best pass-rusher in the draft. We heard it all winter long.

That may end up being true in the long run, but it’s going to be another year or two before Gregory is going to crack the field as a three-down player for the Cowboys. This, in and of itself, isn’t a reason to worry. In fact, many young pass-rushers have thrived coming off the bench to attack quarterbacks in obvious passing situations. The 49ers provided the blueprint with Aldon Smith, who tallied 14 sacks as a rookie.

So often this offseason we’ve heard the Gregory-to-Smith comparison. Both players are long-armed pass-rushers who came into the league with plenty of upside, but they differ in one distinct way (and it’s the reason Gregory will struggle this year): Smith was 27 pounds heavier when he came into the league.

That extra weight has allowed Smith to convert speed to power in ways Gregory could only dream of at this point in his career.

Gregory did manage to add some weight for his pro day, coming in at 238. Unfortunately it didn’t take long for that extra weight, and much more, to come off again.

10. Randy Gregory’s failed marijuana test not the only issue. Heard he recently weighed below 230 on a team visit.

It would seem Gregory’s frame is more than capable of adding weight. That said, it also seems he has a difficult time keeping weight on that frame.

Said this before but if Gregory couldnt get to 250 while he was smoking not sure what makes anybody confident he can do it without smoking.

If Gregory struggles to put, and keep, weight on, he’s just too small to fit in as a defensive end in Dallas’ 4-3 scheme. The variety of moves that served him well against lesser talent in college won’t be able to come to full fruition until he gains more functional strength, which will come as he adds 20-plus pounds of muscle.

He isn’t a natural fit as an outside linebacker in this scheme, either, so it’s likely the former Nebraska Cornhusker will be utilized sparingly in his rookie year. This isn’t a horrible thing for Dallas, but it will keep Gregory from living up to the immense hype that surrounded him heading into the draft.