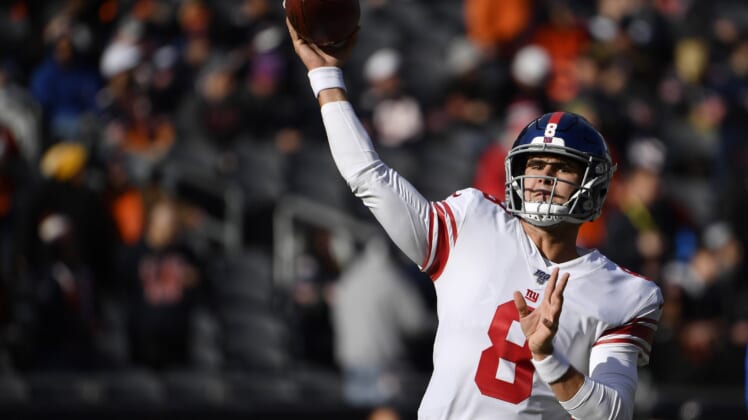 The 2020 NFL season is just a few months away and players are preparing for another exciting year of football. Every season we see a new wave of talent step up with breakout years and that will be no different in 2020 with an exciting group of players.

Everyone’s focus for a potential breakout season usually centers around a young quarterback. We’ve seen the likes of Deshaun Watson, Patrick Mahomes and Lamar Jackson experience their big moment and we’ve got our eye on a particular quarterback this year.

Of course, there will be plenty of breakout seasons at other positions. SO, let’s take a look at five NFL players who are poised to shine during the 2020 NFL season.

The New York Giants fell in love with Daniel Jones and arguably reached for him with the No. 6 pick in the 2019 NFL Draft. As a rookie, it didn’t help that the organization didn’t put him in a great position for success with a pedestrian offensive line and an oft-injured supporting cast. Yet, despite the issues around him, Jones showed flashes of brilliance in his first NFL season.

A new coaching staff should help Jones take the next step in his career, but we’re more excited for Jones due to the upgraded complementary pieces. Andrew Thomas should be outstanding at right tackle, giving Jones more time to stand firm in the pocket and make reads. Even better for New York’s offense, Saquon Barkley and Evan Engram will be healthy. If Jones can eliminate some of the turnovers, a 30-touchdown season could be in the cards for him this year.

The Packers are so confident in Lazard’s talent that general manager Brian Gutekunst practically ignored the wide receiver position this offseason. An undrafted free agent in 2018, the former Iowa State star has battled just to make it on an NFL roster. When his opportunity finally came this past season, the 24-year-old impressed in Green Bay.

Lazard saw limited snaps early in 2019, but eventually earned a significant role on the offense. Aaron Rodgers needs a receiver he can trust to make big plays, an ability Lazard showed with one jaw-dropping catch after another. While Lazard’s stats – 477 receiving yards and three touchdowns – aren’t overly impressive, expect him to be Green Bay’s No. 2 receiver this season. In that role, we could see him eclipse 800 receiving yards and finding the end zone seven times.

Before the 2019 NFL Draft, many thought Jeffery Simmons was a lock for a top-10 pick. A torn ACL delivered a significant blow to his draft stock and it kept him off the field for most of his rookie season. When the young lineman finally hit the field, though, he proved why the Titans knew they got a steal with the No. 19 pick.

It took some time for Simmons’ athleticism and burst to return, but the glimpses still made him a force. He recorded two sacks and four tackles for loss in seven starts. He is now a full year removed from knee surgery, which means he will be even more explosive off the line this season. Don’t be shocked if he earns his first Pro Bowl selection in 2020 with a double-digit sack season.

The Baltimore Ravens understandably viewed Hurst as an expendable player. While moving on from a 2018 first-round pick admits failure in some sense, Baltimore is set at the position with Mark Andrews and Nick Boyle. In Atlanta, though, Hurst has the opportunity to replicate Austin Hooper’s success.

Hurst is a better athlete than Hooper, he just hasn’t had the opportunities to demonstrate his skills in the right role. Now he’ll be the No. 1 tight end in an offense that sent Hooper to the Pro Bowl in consecutive seasons and made him rich in free agency. We expect Hurst, at 6-foot-4 weapon with 4.6-speed, to thrive in 2020. Look for Hurst to eclipse his career stats – 43 receptions for 512 yards and three touchdowns – in his first season with the Falcons.

It’s frankly ridiculous that the Chiefs have Hardman and Tyreek Hill. Together, this duo could become one of the NFL’s most explosive pairing of playmakers for the next decade. Hardman is also just scratching the surface of his potential, given he is still new to the position.

The 22-year-old earned second-team All-Pro honors in his rookie season for his return skills, but his accomplishments go even further. He was one of the NFL’s best slot receivers in 2019, creating separation from cornerbacks and making big plays with Patrick Mahomes. Opponents will be so focused on Hill and Travis Kelce this season that Hardman will become unguardable. Count on him delivering a 1,000-yard campaign in his second season.