5 NBA X-factors down the stretch 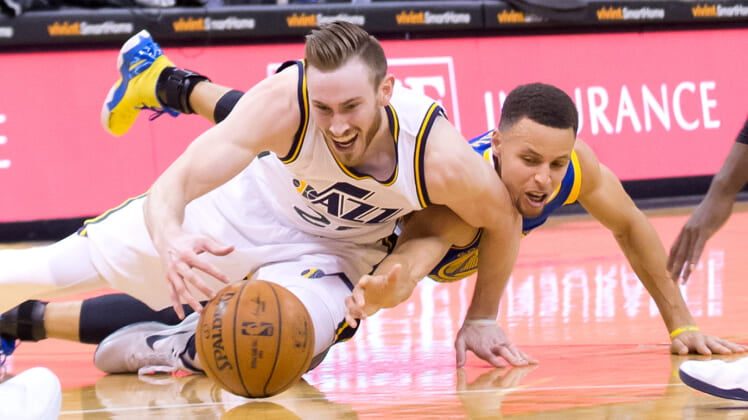 With just a handful of games remaining for each NBA team, things are coming to a head around the Association.

We have five teams battling for the final four playoff spots out west with just a half game separating the third and sixth seeds back east.

As the regular season draws to a conclusion, there are going to be X-factors for each contending team.

Can a certain power forward in Golden State prove that he has the capability of stopping an All-Star at the same position in San Antonio? If so, will he help the Warriors put up 73 regular season wins?

Back east, a previously shoot-first point guard in Miami has proven he can play the role of distributor on an offense with loads of scoring prowess. Can that guy continue to excel in this new-found role?

Here are five huge x-factors around the NBA as the regular season comes to a conclusion over the next week and a half.

In the midst of the best season of his career, Hayward is quickly turning into one of the better all-around players in the NBA. He’s averaging 19.7 points, 4.8 rebounds and 3.8 assists per game while shooting 43 percent from the field.

Though, the former Butler standout has struggled a tad recently. He’s failed to put up more than 11 points in three of his past nine games and is averaging a hair over 15 points in Utah’s past 10 outings.

Tied with the Dallas Mavericks for the seventh seed and one game ahead of the Houston Rockets for a playoff spot out west, Utah needs to see the Hayward that has put up 22 points in each of the past two games while shooting a combined 50 percent from the field.

In this, Hayward is going to be an x-factor one way or another. After all, Utah is seven games over .500 when he puts up 20-plus points and six games under .500 when he doesn’t.

With home games coming up against the Los Angeles Clippers and San Antonio Spurs this week, Hayward has an opportunity to inch his team closer to a surprise playoff appearance. He’s going to need to be at the top of his game. 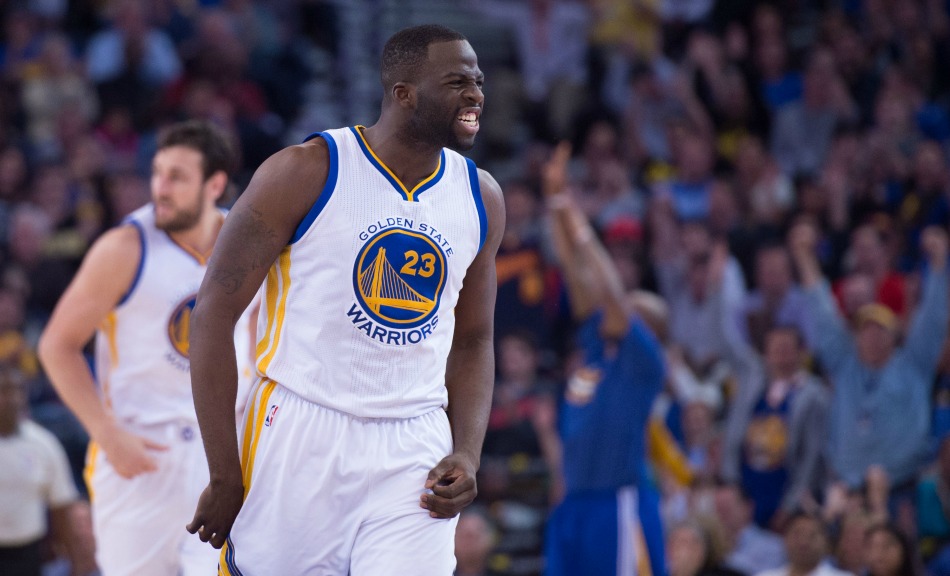 Fresh off his 13th triple-double of the season, Green is currently playing the best basketball of his career. He’s averaging 15.8 points, 10.8 rebounds, 8.6 assists, 2.6 blocks and 2.0 steals over the past five games.

It’s not a coincidence that the Warriors are now on the verge of potentially breaking the NBA record for wins in a single season. More than that, the team is closing in on the top spot out west.

The sexiest game this week around the Association will take place Thursday when San Antonio travels to Oakland to take on the Warriors for the third time this season. The matchup within the matchup is going to be huge here.

In Golden State’s 30-point home win over San Antonio back in January, Green held LaMarcus Aldridge to five points on 2-of-9 shooting. Aldridge ended up finishing that game with a negative 20 plus-minus while Green put up a game-high plus-29.

Fast forward almost two months, and it was a completely different story in San Antonio in mid March. Aldridge put up a game-high 29 points on 11-of-25 shooting while nabbing 13 rebounds. And while Green himself neared a triple-double in the 87-79 loss, he didn’t have anywhere near the same success defensively.

More than acquiring the 73 wins needed to break the Chicago Bulls record, Golden State needs to see how it truly matches up against San Antonio heading into the playoffs. In this, Green is definitely going to be an x-factor. Let’s just hope both teams are prepared to go full strength in this titanic tilt.

Currently tied for the fifth seed and just a half game out of a top-three seed back east, the next week-plus is going to be monumental for the Heat’s hopes of going to deep into the playoffs.

With games coming up against playoff contenders in the Detroit Pistons and Chicago Bulls prior to a back-to-back against the hapless Orlando Magic, Miami needs to separate itself from the bottom-rung contenders back east.

It’s all going to have to run through Dragic if the Heat hope to earn home-court advantage in the first round and avoid the possibility of having to take on the Cleveland Cavaliers in the conference semifinals.

Miami boasts an 18-7 record when its starting point guard puts up seven-plus assists. It’s just 20-19 when he doesn’t.

As the chief distributor on an offense with many scoring weapons, Dragic’s role has quickly changed since he was acquired from the Phoenix Suns last season. His ability to continue this will be a huge x-factor down the stretch. 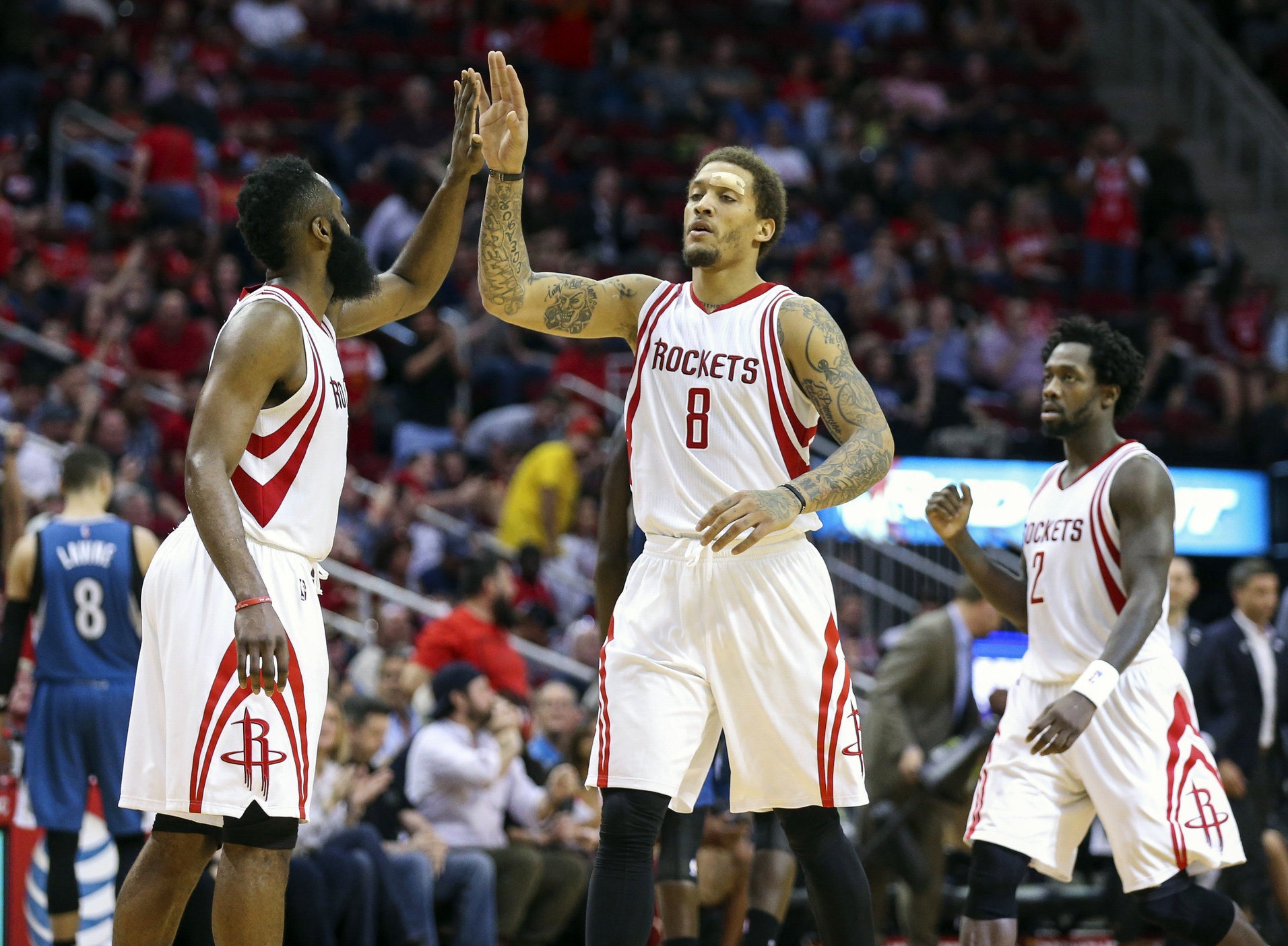 I am actually at a loss for words here. Since joining Houston back in early March, Beasley is the team’s second-leading scorer behind James Harden at 14.6 points per game. He’s also shooting 52 percent from the field and nabbing 5.6 rebounds per game.

With Houston currently one game out of the final playoff spot out west, it is going to need continued production from this castoff. After all, the likes of Trevor Ariza, Corey Brewer and Josh Smith have failed to take advantage of the opportunities presented to them this season.

Beasley’s importance in this regard cannot be overstated. He has the ability to put up points in bunches. He’s also proven himself to be more than a pure volume scorer — something that has plagued both Brewer and Smith thus far this season.

It’s rather simple here. In the seven games that Beasley has shot better than 50 percent from the field, Houston boasts a winning record. In the eight games he hasn’t, the team is just 3-5.

Harden might be able to carry this team to the playoffs, but it sure wouldn’t hurt to see Beasley continue to produce at this oddly high clip. This takes on an added importance with a game coming up against Dallas on Wednesday. A win there would keep Houston’s playoff aspirations alive. A loss, and it would drop to two games behind the division-rival Mavericks.

Blazers general manager Neil Olshey knew exactly what he was getting in Aminu when the team signed him last summer. After all, the underrated executive drafted Aminu when he was with the Los Angeles Clippers back in 2010.

Surprisingly, the Wake Forest product has packed a bit more punch than most anticipated from a scoring perspective this season. Prior to that, Aminu was simply considered a lock-down wing defender. That’s no longer the case.

Including a performance against the Boston Celtics last week that saw him hit a career-high six three pointers, Aminu is averaging 16.0 points and shooting 48 percent from three-point range over the past five games.

This scoring bonus has been needed with Damian Lillard struggling to an extent from the court recently.

Currently the sixth seed out west, Portland is battling with the Memphis Grizzlies for the fifth spot. It’s also just 1.5 games ahead of Houston for the final playoff seed out west.

As good as Lillard and back-court partner in crime C.J. McCollum have been, Portland could use a consistent third scorer behind those two. And when Aminu scores, the team is pretty hard to beat. That’s going to be the key moving forward. It also makes Aminu a major x-factor down the stretch.