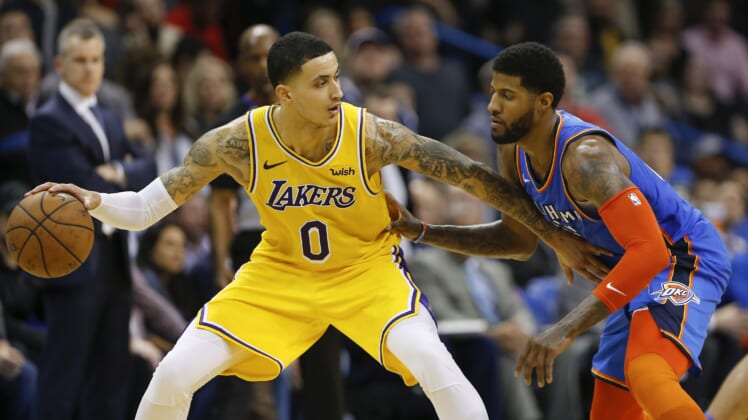 Paul George will be under a microscope once NBA season returns

The clock is ticking. Just six weeks separate us from the 2019-20 NBA season restarting in Orlando on July 30. It’s been a long time coming. Getting live team sports back is just the tonic we need during these most trying of times.

For teams and individual players, not much has changed since the season was suspended back on March 11.

The good news for players who were in the midst of down seasons is that they now have a chance to redeem themselves and start anew.

From a struggling big-ticket free agent in Philadelphia to a young forward in Southern California, here’s a look at five players who must rebound from poor early-season performances once the campaign gets going again.

Signed to a four-year, $109 million contract last summer, Horford has come nowhere near close to panning out for the Sixers. They were expecting the then 32-year-old big man to pack a scoring punch behind the likes of Joel Embiid, Ben Simmons and Tobias Harris. Prior to the season being suspended, Horford struggled in nearly every area.

The five-time All-Star is averaging just 12.0 points to go with 6.9 rebounds while shooting 44% from the field. Horford’s point-per-game average would represent his lowest since 2008-09 with his shooting percentage being a career low. If Philadelphia is going to get out of its season-long rut, Horford will have to up his game in a big way.

There’s somewhat of an excuse for George’s slow start to his Clippers career. The six-time All-Star underwent shoulder surgery last summer, which forced him to miss the opening of the season. His inability to get into a rhythm with fellow star Kawhi Leonard obviously played a role here, too.

Even then, George must up his game in Orlando if the Clippers are going to come out of the Western Conference. He entered the suspended portion of the season averaging 21.0 points, 5.7 rebounds and 3.9 assists on 43% shooting from the field. Not horrible numbers by any stretch of the imagination. Though, they are down across the board from what we saw George do over the past four seasons.

It stands to reason that Kuzma’s numbers would go down from his sophomore season after Los Angeles added Anthony Davis in a trade. Here’s a dude that averaged 18.7 points last season, leading to the Lakers pushing back against dealing him for the above-mentioned Davis.

It has not gone swimmingly thus far in 2019-20. Dealing with a multitude of injury issues, Kuzma is averaging 12.5 points on a disastrous 30% shooting from three-point range. LeBron James and Davis could very well be enough to lead Los Angeles to its first title since the Kobe Bryant era. But Kuzma finding a way to step up once the season resumes would loom large for the Lakers.

Boston signed Walker to a max contract last summer. The hope was that he’d take over for Kyrie Irving as the face of the franchise. After some initial success, it seems that the All-Star guard has fallen back to earth. In fact, youngsters Jayson Tatum and and Jaylen Brown have been more consistent scoring threats for the Celtics.

Walker, 30, is averaging a mere 4.9 assists from the point guard position. This would represent his lowest output since the Connecticut product was a rookie back in 2011-12. He’s also shooting just 42% from the field. Boston needs Walker to perform at a higher clip if it expects to surprise the masses with a trip to the NBA Finals.

It seemed at times prior to the season being suspended back on March 11 that Jokic struggled with fitness. He was seen overweight and winded at times. It led to long stretches on the bench and concerns over his conditioning. Sure the most-skilled big in the game was still averaging north of 20 points to go with 10.2 rebounds and 6.9 assists. But something seemed off.

There’s good news on this front for a contending Nuggets team. Jokic spent his time in quarantine getting in better shape. He looks like a completely new man. If this translates to the hardwood at Walt Disney World, it would not be a shock if Denver made a deep run in the playoffs.