5 most underrated wide receivers heading into the 2020 NFL season 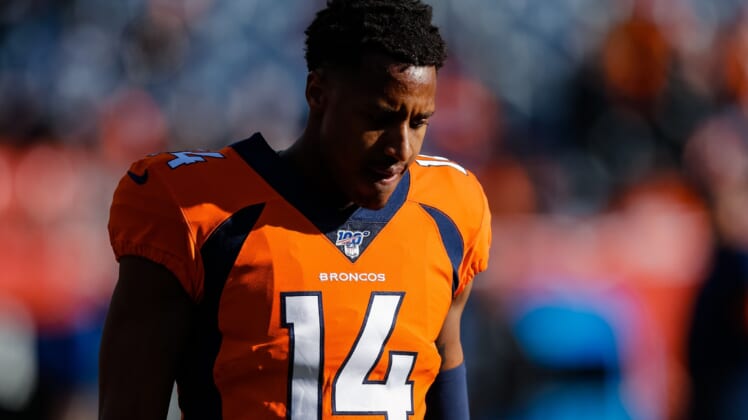 The NFL is filled with some absolutely dynamic pass catchers who have not garnered a lot of attention at the national level.

Carolina Panthers free-agent signing Robby Anderson is among them. It would also be hard to ignore young wide receivers in Denver, Dallas and Northern California.

It’s in this that I take a look at the five-most underrated wide receivers heading into the 2020 NFL season.

It’s pretty stunning that the Carolina Panthers nabbed Anderson from the New York Jets in free agency for a mere $20 million over two seasons. Despite dealing with a less-than-stable quarterback situation in Jersey, Anderson has proven himself to be more than a capable No. 2 receiver.

The 27-year-old former undrafted free agent from Temple is averaging 55 receptions for 824 yards and six touchdowns over the past three seasons. He’ll now be tasked with catching passes from Teddy Bridgewater in Carolina this coming season. Expect a strong performance from the underrated receiver in 2020.

Buffalo’s decision to sign Brown to a three-year, $27 million contract prior to last season has proven to be an absolute steal. He was coming off an up-and-down one season in Baltimore that saw the veteran haul in a mere 43% of his targets. Seen as a speedster, Brown needed to improve in that category with the Bills last season.

Despite dealing with an inaccurate Josh Allen under center, the 30-year-old Brown did just that. He caught 63% of his 115 targets, tallying 72 receptions for 1,060 yards in the process. Brown also averaged a robust 9.2 yards per target. Talk about coming through big time for a surprising Bills squad.

In no way did the Cowboys make a mistake by selecting CeeDee Lamb in the first round of April’s draft. They saw a tremendous amount of value in the talented young receiver. Though, it did disrespect this former third-round pick to an extent. In terms of productivity, Gallup was right up there with high-priced teammate Amari Cooper last season.

Sure Gallup might see a decrease in target and catches with Lamb aboard. In no way does this mean he’s not underrated. The Colorado State product is the definition of just that.

Last year’s rookie class at wide receiver was interesting in that those selected in Round 2 performed at a much higher clip than pass catchers taken within the first 32 picks. Samuel was no different. The South Carolina product performed at such a high level for the eventual NFC champions that he’s now being relied on as a No. 1 receiver in Year 2.

The 5-foot-11 Samuel hauled in 57 passes for 802 yards. He caught 70% of his targets and averaged nearly 10 yards per target. Those are absolutely elite numbers right there. Not to be outdone, Samuel was electric on the ground. He gained another 159 yards on 14 rushing attempts, scoring three touchdowns in the process. Watch out, NFC West.

The addition of Jerry Jeudy in the first round of April’s draft is only going to make Sutton better. A second-round pick out of Southern Methodist back in 2018, the 6-foot-4 Sutton has bucked the recent trend of big-bodied receivers struggling early in their careers. And it bodes well for young quarterback Drew Lock moving forward.

Sutton, 24, recorded 72 receptions for 1,112 yards and six touchdowns as a rookie. He also averaged nine yards per target. If Sutton is able to work on his catch percentage (54.8% for his career), he’ll be an elite-level target for Mr. Lock moving forward. That’s for sure.