5 most overhyped games on the 2020 NFL schedule 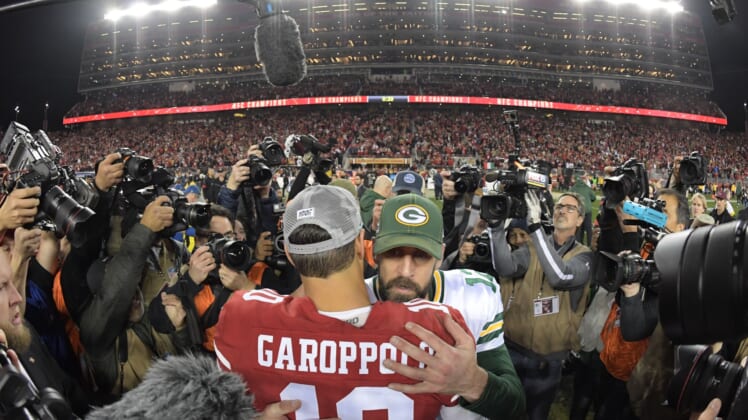 The 2020 NFL schedule was officially released during a three-hour event on NFL Network Thursday evening.

There’s a whole bunch of awesome games on the slate. Though, there’s also some overhyped matchups on the schedule.

Do we really need to see the Green Bay Packers get blown out by the San Francisco 49ers on national television once again? And while the Minnesota Vikings holiday game against the New Orleans Saints in December is intriguing, was it really necessary to schedule this game on a Friday?

These are among the most overhyped games on the 2020 NFL schedule.

One of the greatest rivalries of the 1990s has been renewed to an extent in recent years. These two faced off in the NFC Championship Game this past January, the first time they have met in the playoffs since Colin Kaepernick ran roughshod through the Packers. Though, unlike previous iterations of this rivalry, it has been lopsided.

San Francisco outscored Green Bay 74-28 in their two games last season. Both games were blowouts early and often. While the 49ers seem to be legit repeat contenders in the NFC, the Packers have taken a step back. The backdrop here being the drawn out narrative surrounding San Francisco passing up on Aaron Rodgers back in 2005 and the possibility he could end his career in the red and gold. Can we just stop with these narratives, please? Putting this game on Thursday night was all sorts of meh.

A potential Super Bowl preview. Tom Brady going up against reigning Super Bowl MVP Patrick Mahomes at a venue that will host the annual event this coming February. There’s certainly a lot of stories behind the scenes here.

With that said, it’s going to be hyped way too much leading up to the Week 12 affair. Sure Brady has more talent around him in Tampa Bay than New England. The Buccaneers will be competitive. But in no way can this be seen as a potential Super Bowl preview until we actually get to watch Brady’s Buccaneers on the field. Until then, it’s nothing more than a nice game on paper.

The Minneapolis Miracle is still one of the greatest playoff games we have seen in the modern history of the NFL. In fact, this rivalry can be traced back to January of 2010 when the “Bountygate” Saints, led by defensive coordinator Gregg Williams, defeated the Vikings in the NFC Championship Game. Then, last season, Minnesota upset New Orleans in a game with a controversial ending.

Needless to say, this is going to be talked about a whole heck of a lot. Two potential conference title contenders going up against one another in the Bayou. The problem here is that New Orleans seems to be heads and shoulders better than its NFC counterparts. Last season’s NFC Wildcard Game notwithstanding, don’t expect this regular-season affair to live up to the hype.

It was just a few months ago that Derrick Henry and the Titans absolutely shocked the Baltimore Ravens on the road in the AFC Divisional Playoffs. Baltimore headed into that game with a league-best 14-2 record, only to see Mr. Henry put up 202 total yards in a blowout loss.

Narratives surrounding reigning NFL MVP Lamar Jackson have already started. Now 0-2 in the playoffs, he’s setting forth to end said narratives. It will be the talk leading up to this game, as will last season’s playoff meltdown. But make no mistake about it, the game won’t be competitive. Baltimore is much better than its AFC counterparts. That will show on the field come Week 11.

Oh boy. Jimmy Garoppolo returning to New England mere years after they traded him to San Francisco. The Super Bowl quarterback will do so with his former Patriots team attempting to move forward without six-time champion Tom Brady. Imagine the narratives surrounding this Week 7 game.

Unfortunately, it’s not going to live up to the hype. On paper, New England is among the worst teams in the NFL. On the other hand, these 49ers are well-equipped to land a haymaker in the direction of Bill Belichick’s squad. It likely won’t be pretty leading into the midway point of the season. This could be the game that New England is exposed.