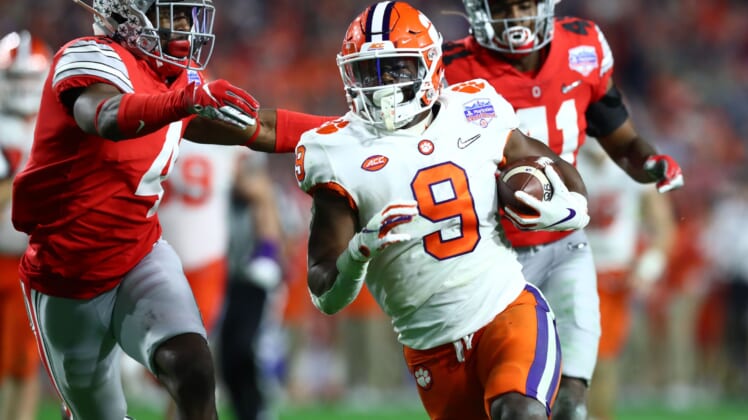 One of the most valuable assets for any football team is an explosive weapon. A player with the ability to score from anywhere changes the dynamic of every play. They keep opponents on edge, even creating opportunities for their teammates when they don’t have the ball.

When they get the ball in their hands, especially against inferior athletes, these explosive players create one highlight after another. Here are the five most explosive players entering the 2020 college football season.

At 5-foot-10, Etienne is slightly undersized for a workhouse running back. But that didn’t stop Clemson’s star from having an unparalleled 2019 season. Across the country, no one could match his level of volume and efficiency. Etienne was the only player to finish the season in the top 10 for rushing touchdowns, rushing yards and yards per carry.

In fact, Etienne’s 7.8 yards per carry was the second-highest mark in the nation, boosted in part by several huge plays. Shockingly, that marked a step down for him. As a sophomore in 2018, he earned an obscene 8.1 yards per touch, while leading the country with 24 rushing touchdowns.

While it’s not what he’s known for, Etienne also has shown off his incredible explosive ability in the receiving game. In 2019, Etienne averaged over 11 yards per catch and converted more than 10% of his catches into touchdowns. Etienne is my pick for the running back with the best shot at the Heisman, and his explosiveness is a huge reason why.

You may not have heard of Stevenson, but his nickname – Speedy – tells you all there is to know about the Cougars standout playmaker. Stevenson’s speed is breathtaking. He finished with the second-most two kickoff return touchdowns, torching opponents regularly. He also caught two receiving touchdowns for 75-plus yards — in one game. In another game, it took a matter of seconds in one play for Stevenson to hit pay dirt.

Stevenson’s accomplishments just get more impressive with context. While many other explosive playmakers play on top offenses stacked with stars, Stevenson was Houston’s lone bright spot offensively. He accounted for nearly 40% of the Cougars total receiving yards and nine of their 20 passing touchdowns. Even with all the defensive attention on him, “Speedy” was unstoppable. He’s unlikely to slow down in 2020.

How good is Ja’Marr Chase? The 2020 NFL receiver class was touted as one of the best in years. It saw a record 13 ball-catchers taken in the top two rounds, including seven in the first. For as talented as the class was, Chase was better than all of them. The sophomore took home the Fred Biletnikoff Award as the best receiver in the nation.

While being an outstanding receiver doesn’t necessarily mean Chase is explosive, both the eye test and stats prove he is exemplary in that department. He averaged 21 yards per play from scrimmage, fourth-most in the country. He maintained this ridiculous average despite insane volume, as he dominated his peers in receiving yardage as well.

Chase also topped the touchdown charts with 20, many of which showcased his breakout speed. Even when he didn’t find the end zone, he made huge plays. Over half of his games featured a reception of 40-plus yards. Chase’s stats will likely not be quite as eye-popping with teammate Joe Burrow gone, but his talent and explosiveness will still make the LSU offense must-watch TV.

Fields is the most explosive player in college football, at least according to his former head coach. However it’s hard to argue with Urban Meyer, given how much time Ohio State spent recruiting Fields and convincing him to join the program.

Fields stats speak for themselves. His adjusted yards per attempt of 11.2 in 2019 trailed only Joe Burrow and Jalen Hurts. The former Bulldog also threw 41 touchdowns and just three interceptions.

To make matters worse for opposing defenses, the dual-threat quarterback also racked up 484 yards and double-digit scores with his legs. Meyer may be exaggerating in declaring Fields number one, but he’s not off by much.

If you want to understand the influence Hubbard has on campus, look at the impact he makes for this team. Coming out of Canada, the star athlete has proven himself since he arrived in Oklahoma State. Yes, his 6.4 yards per carry was good for “only” 21st in the nation, but don’t let that fool you. In 2019, he led the nation in 20-plus yard runs. Of course, those weren’t his only big plays. He ripped off huge gains with ease, from 30-yard sprints to this 92-yard scorcher.

Hubbard also led in total rushing yards, with a whopping 2,094. The only other Oklahoma State running back to eclipse 2,000 in a season is the great Barry Sanders. While Hubbard is not quite Sanders, even being in the same conversation gives you an idea of the level of explosiveness he brings with every touch.