5 most dangerous playmakers in the NFL today 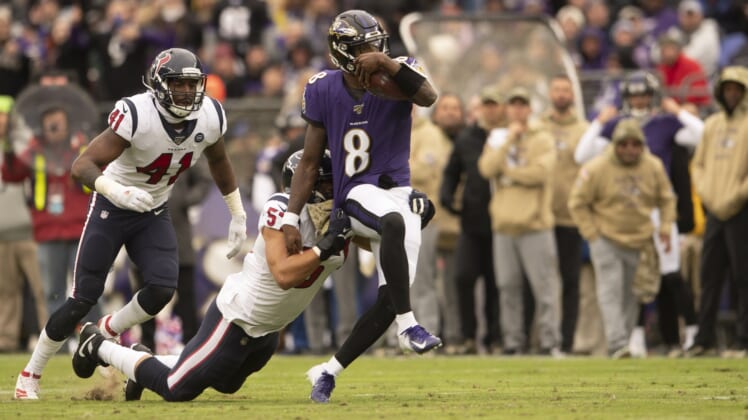 The NFL is in the midst of an era full of explosive playmakers that can make jaw-dropping plays look easy. When a team puts the ball in the hands of a extraordinary athlete, they are a legitimate threat to take it the distance and to provide fans with a play they will never forget.

It’s about more than just speed. While that might help a running back create some distance or allow a wide receiver to get open deep, that doesn’t make someone a dangerous playmaker. The ability to make defenders miss when they are right in front or reverse field and find a hole in the defense that no one else sees helps separate these players from the rest.

As we look ahead to the 2020 NFL season, these are the five most dangerous playmakers we see in the NFL today.

It’s rare for a quarterback to be listed among the league’s most dangerous playmakers. For all the incredible plays they make with their arm, they just don’t provide the explosive rushing ability to be considered a playmaker. Of course, as he showed during the 2019 season, the unanimous NFL MVP winner is beyond special at quarterback.

He makes ankle-breaking runs look easy and 40-yard rushing touchdowns appear routine. It’s why he set the NFL’s single-season quarterback rushing record with 1,206 yards, but his skills go beyond that. Jackson can make impossible throws look like a simple toss and he rarely turns the ball over. We saw Lamar Jackson post incredible stats this past year and with coaches raving about his growth as a passer, he will remain an unstoppable playmaker.

It’s rarely wise for an NFL team to sign a running back to a record-breaking contract. The mega deals rarely work out, with the organization often moving on a few years in after realizing the player is in a steep decline. We aren’t expecting that to be a problem in Carolina as its star should be worth every penny.

Christian McCaffrey’s stats are simply ridiculous. Not only did he rack up 1,387 rushing yards and 15 touchdowns, he also added 1,005 yards and four scores as a receiver. In fact, McCaffrey broke his own single-season record with 116 receptions by a running back. When you can do things like this, there’s just no way for a defense to stop you for an entire game. Now under offensive coordinator Joe Brady, we expect McCaffrey to make even more plays in 2020.

It’s not fair what this man can do on the football field. Defensive backs spend the week before a matchup against the Kansas City Chiefs dealing with nightmares of Hill turning them into burnt toast. When the game finally starts, this explosive weapon goes out and turns those nightmares into reality.

Frankly, he might have even more room to improve based on his insane workouts this offseason. Look at Tyreek Hill’s stats from 2018, per Pro Football Reference, when he averaged 17 yards per catch and finished with 1,630 scrimmage yards. A playmaker in every sense of the word, get the football in Hill’s hands and stellar things happen.

We did not see the Alvin Kamara everyone loves during the 2019 NFL season. The star running back admitted he played at less than 80% health, per NFL.com, with injuries taking a toll on his explosiveness. He finally started to come alive near the end of the year, which leaves us feeling optimistic for the 2020 NFL season.

This is a player capable of recording 1,000 rushing yards and 1,000 receiving yards in a single year. As Alvin Kamara’s stats from 2018 capture – 1,592 scrimmage yards on 275 touches – he can make plenty of big plays. Defenses might be focusing on Michael Thomas more next season, which could open the field up for Kamara. It will be great news for the Saints and even better for fantasy football owners.

Everyone had their eye on Godwin for a breakout season in 2019. Despite Jameis Winston seemingly turning the ball over on every other drive, Godwin proved he is one of the most explosive weapons in the NFL. In fact, he could be on the verge of accomplishing even more with Tom Brady now under center for the Buccaneers.

Godwin was among the most explosive playmakers in the NFL this past season after the catch, per FOX Sports. Just as impressive, according to Pro Football Focus, he finished near the top among his peers in broken tackles. As we look ahead to the 2020 season, Godwin will now have a more accurate quarterback throwing him the football. Don’t be shocked if he winds up becoming a first-team All-Pro selection this year and leads the NFL in receiving yards.