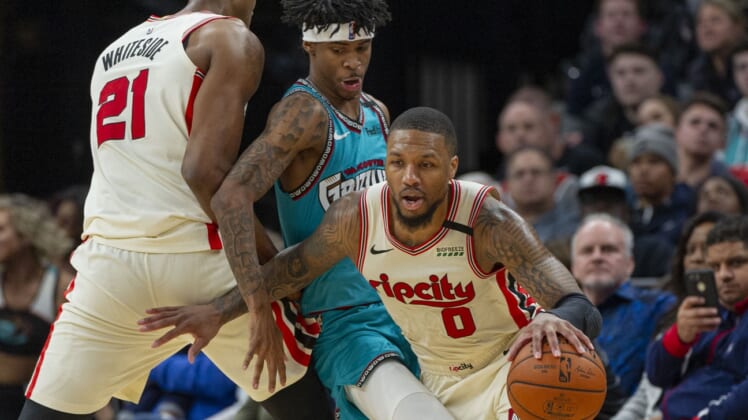 The first of its ilk. A play-in tournament to decide who will take on the Los Angeles Lakers in the first round of the NBA Playoffs starting next week.

The NBA made this a possibility once it resumed the 2019-20 season at Walt Disney World following a five-plus month hiatus.

Following Damian Lillard’s downright brilliant performance in the seeding games, the Portland Trail Blazers head into Saturday’s play-in game against the Memphis Grizzlies as the eighth seed. Portland will need to win just once, either on Saturday or Sunday, to advance. On the other hand, Ja Morant and the Grizzlies will have to win both games.

Here, I look at the five biggest keys for what should be an interesting weekend of basketball between these two teams in Orlando.

With this second-year star now out for the remainder of the season with a knee injury, the Grizzlies find themselves in a less-than-stellar situation. Jackson, 20, finished the 2019-20 campaign averaging 17.4 points on 39% shooting from distance. His ability to stretch the court from both the four and five spots was absolutely huge for a surprising Memphis team.

More so than stud rookie Ja Morant (more on him later), other members of the Grizzlies must step up against Portland. Can veteran forward Jae Crowder increase his output after averaging less than 12 points per game in Orlando? If not, Memphis is going to need rookie first-round pick Brandon Clarke to continue stepping up. He averaged 12.3 points on 59% shooting in the final eight regular-season games.

After dropping 42 points in Portland’s must-win outing against the Nets on Thursday, Lillard had a rather interesting comment on his aggressive style late in said game.

“Our season was on the line. It got to the point where I wasn’t gonna sleep well tonight knowing I was passive,” the star guard said. “So each time I saw a look, I don’t care how far it was, if I had a sniff, I was raising up and shooting it.”

This is the cold-blooded mentality that has defined Lillard’s time in Orlando thus far. The star guard averaged 37.6 points and 9.6 assists on 50% shooting in the eight regular-season games at Walt Disney World. Dame will be the reason Portland finds a way to make a deep run or ultimately goes home after this weekend. He can’t rely on lesser players to pick up the slack. He must go full Kobe Bryant.

I focused before on the need of another player to step up behind this Rookie of the Year favorite. Though, to a lesser degree than Lillard, Morant must make sure he’s aggressive and ready to put Memphis on his back. The Grizzlies posted a horrible 2-6 record in their eight seeding games at Disney World. For his part, Morant averaged 20.0 points on just 25% shooting from three-point range.

Despite this, the youngster can’t let those struggles deter him from remaining aggressive come Saturday. Sure he’s going to need to drive more to the line and find the easy shot. Even then, limiting his offensive game to this would prove to be a major failure for Morant.

Star guard C.J. McCollum can get cold at times out on the perimeter. When he’s clicking with Lillard, the Blazers are simply hard to outscore. When the guard is off, another player must step up in order to mask Portland’s issues on the defensive side of the ball.

Signed during the early part of the season, this future Hall of Famer shocked the masses with his initial performance in the Pacific Northwest. Anthony also put up three consecutive 20-plus games in Orlando before going for just nine in the Blazers’ regular-season finale. If he can put up 20-plus on Saturday, Portland is going to be hard to beat.

Jusuf Nurkic and Hassan Whiteside against Jonas Valančiūnas. Three legitimate centers in an NBA that has devalued that position. Three veterans with a combined decades of experience in the Association.

Nurkic’s story is by now well known. He just recently returned after a year-plus absence due to a horrific foot injury. The dude has made a major difference. He’s averaging 17.6 points, 10.3 rebounds and 4.0 assists in eight games. Meanwhile, Valančiūnas could provide the inside-out game with Morant that Memphis needs following the injury to Jackson Jr.