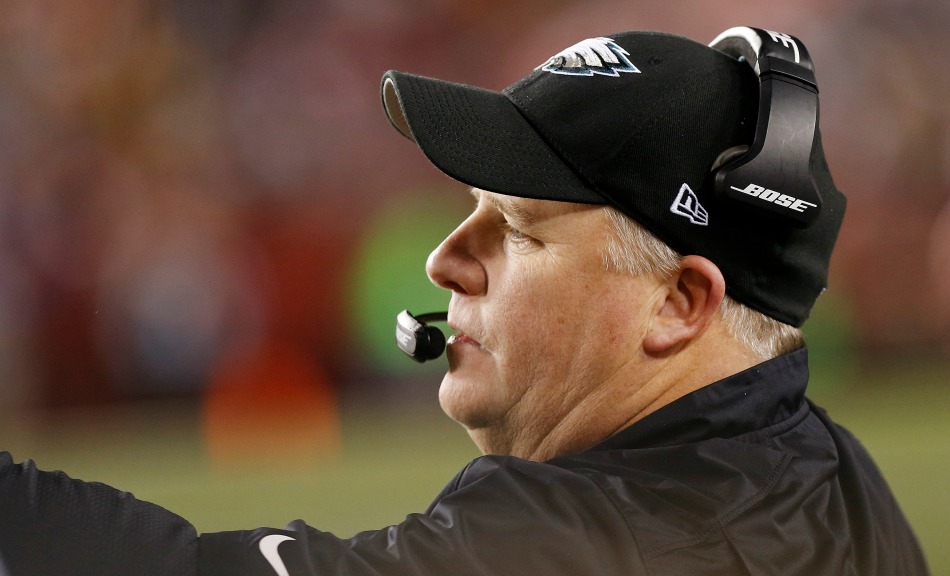 After the dust settled in the LeSean McCoy for Kiko Alonso trade, the Philadelphia Eagles were left with an estimated $50.26 million in cap space, and a plethora of unanswered questions. Dealing McCoy capped off a busy period for the Eagles, and an emotional one for the team’s fan base.

Who will replace LeSean McCoy? Will this trade enable the Eagles to land Marcus Mariota in the draft? What are the team’s options in free agency? Is DeMeco Ryans the next to go?

If Chip Kelly’s time in Philadelphia has taught us anything, it is that he is unpredictable, and unconcerned with common thought. Kelly believes he is smarter than you, your know it all cousin, and every late-night caller on local talk radio. Now it is his time to prove it.

Chances are Ryans is on his way out. The Eagles’ linebacker is coming off an Achilles tear and is owed $6.9 million next season. Cutting Ryans would leave Philadelphia with $57.16 million in cap space, which would rank it third in the league behind the Oakland Raiders and Jacksonville Jaguars. Kelly’s day of reckoning as Eagles’ skipper is nigh, so how will Kelly spend this team-changing load of cash?

5. Own What is Known

Jeremy Maclin led the Philadelphia Eagles in receiving with 85 receptions for 1,318 yards and 10 touchdowns last season. The former first-round pick accomplished all of this with just one dropped pass while coming off of a torn ACL. It is time for Philadelphia to pay this man. Re-signing Maclin would cost in the neighborhood of $10 million, which would leave the Eagles with around $47 million left to spend.

One other free agent that needs to be re-signed is Cedric Thornton, the man Chip Kelly proclaimed to be the team’s best defensive player last offseason. Thornton is an unknown talent league-wide, so expect his contract level to come in around four or five million. This would set Philadelphia up to spend just over $40 million in free agency. Plenty of cash to make a big-time splash on the open market.

With both starting corners from a season ago, Cary Williams and Bradley Fletcher, out of the picture, the Eagles will look to upgrade this position significantly. Free agent cornerback Byron Maxwell has been linked to the Eagles. He is also the type of athletic player Kelly likes to build around. However, Maxwell will not come cheap. He is seeking to become the highest-paid free agent corner behind Darrelle Revis.

Maxwell’s cap hit would be right around the $10 million mark, leaving Philadelphia with an additional $32 million or so in cap space. So who would be the counterpart to this high-dollar option? San Francisco 49ers corner Perrish Cox ranked third in the NFL last season in pass breakups, disrupting 22 attempts. Cox enters a crowded cornerback market that also features his complement on the 49ers defense last season, Chris Culliver. At 6’0″ and 190 pounds, Cox has the size to attract Kelly. The five-year veteran would solidify Philadelphia’s needs in the secondary.

Upgrading the receiver position is no dire need for Philadelphia, but things get bleak in the team’s receiving corps after Jeremy Maclin and sophomore to be Jordan Matthews. While the jury is still out on Josh Huff, Riley Cooper must be replaced on the outside. The team would do well to sign a veteran option on the cheap, while providing a stop-gap and counterpart for Maclin on the wing. Kenny Britt is one option here, as are pricier players such as Cecil Shorts III and Michael Crabtree. Do not expect the Eagles to break the bank twice at the wide receiver position. So whatever happens here, a deal in the five or six million dollar range seems likely.

2. Replace the Face of Franchise

With LeSean McCoy out the door, the Eagles are in need of an every-down back. While Darren Sproles will surely shoulder the load on most passing downs, the team is in need of a between the tackles type back to handle early-down duties. Names like San Diego Chargers’ rusher Ryan Mathews or former New Orleans Saints first-round pick Mark Ingram would fit well for the Eagles. They are both cheaper options than DeMarco Murray, who likely won’t be on the Eagles radar. Fully expect the Eagles to add depth here in free agency, and then go get their man for the future in the NFL draft.

By adding Kiko Alonso, the Eagles now have one of the most athletic pairings of young middle linebackers in football. Mychal Kendricks and Alonso will be a dynamic duo not only in 2015, but for the foreseeable future. Veteran Connor Barwin will hold down one outside linebacker position after racking up 14.5 sacks from the position last year. Imagine what Barwin will do when he is free to rush the passer on every down due to Alonso’s strengths in pass coverage.

Despite three slots being locked up, there is still one massive opening with the departure of Trent Cole. Much like Byron Maxwell, 27-year-old Pittsburgh Steelers linebacker Jason Worilds has been rumored to be interested in a move across the state of Pennsylvania. Worilds has 15.5 sacks over the past two seasons, and would be a perfect complement to Barwin on pass-rush downs.