49ers rumors: Talks regarding a Kirk Cousins trade are overblown 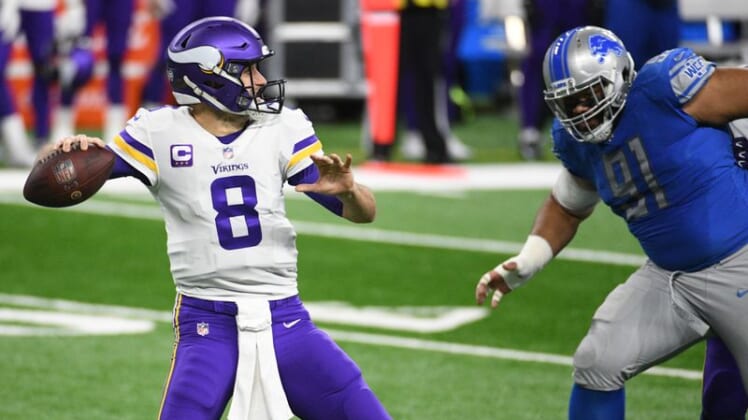 While the team’s brass appears committed to Jimmy Garoppolo publicly, San Francisco 49ers rumors continue to link them to other quarterbacks on the trade market.

San Francisco was in on Matthew Stafford before he was traded from the Detroit Lions to Los Angeles Rams. The team is said to be interested in a Deshaun Watson trade, too.

However, one recent rumor that popped up seemed to make absolutely no sense. That included the 49ers trading for enigmatic Minnesota Vikings veteran signal caller Kirk Cousins. We now have some more concrete information on this, and order seems to have been restored.

“I guess something could happen, but I haven’t heard that that’s the case, so I don’t know where that’s coming from,” ESPN’s Adam Schefter told KNBR on Wednesday. “Anything’s always possible, but Kirk Cousins re-did his deal this summer. … I have not heard anything about Kirk Cousins being available.”

Indeed, the Vikings did sign Cousins to a two-year, $66 million extension back in March of 2020. The team would take on a $41 million dead cap hit by trading Cousins ahead of June 1. Given Minnesota’s disastrous cap situation and the fact that it will have to move on from multiple veterans, the idea of a Cousins trade really didn’t make much sense.

As for 49ers rumors surrounding a Cousins trade, they’ve simply been brought up due to his relationship with head coach Kyle Shanahan dating back to their days together with the Washington Football Team. San Francisco was said to be looking to make a play for Cousins during free agency in 2018. That changed when Shanahan and Co. traded for Jimmy Garoppolo midway through the 2017 campaign.

The complexities as it relates to a potential Cousins trade to the 49ers go much further than this. Is he an upgrade over Garoppolo? The veteran also has a $45 million cap hit for 2022, a figure San Francisco would have to take on in its entirety. Already up against the cap and having to think about extending All-Pro linebacker Fred Warner, that’s not a figure the 49ers would be comfortable with.

Then, you have the entire compensation thing. It stands to reason Minnesota would have to send draft picks to the 49ers in a potential Garoppolo-for-Cousins swap given their contracts. Garoppolo is set to count $26.4 million against the cap in 2021. Any team looking to get out from under his deal following next season would only take on a $1.4 million dead cap hit by releasing him.

In short, this is not happening.

49ers rumors will continue to focus on the quarterback position

With all of that said, there’s a pretty good chance Garoppolo will not be the 49ers’ starting quarterback in 2021. Their brass has shown public support for the injury-plagued quarterback. That’s fine and dandy. It’s also PR spin.

As evidenced by San Francisco’s flirtation with Tom Brady last offseason, immediately after Garoppolo led the team to the Super Bowl, its brass is not sold on the incumbent moving forward. Rumors linking the 49ers to Matthew Stafford, Deshaun Watson, Carson Wentz and whoever else is seen as a starter-caliber quarterback adds another layer to this.

Sure the 49ers could roll with Garoppolo under center Week 1 of the 2021 season. That’s a strong possibility. However, there’s too much smoke to suggest that their brass is sold on him moving forward.

At the very least, it seems like Kirk Cousins will not be trading in his purple and white for the red and gold.