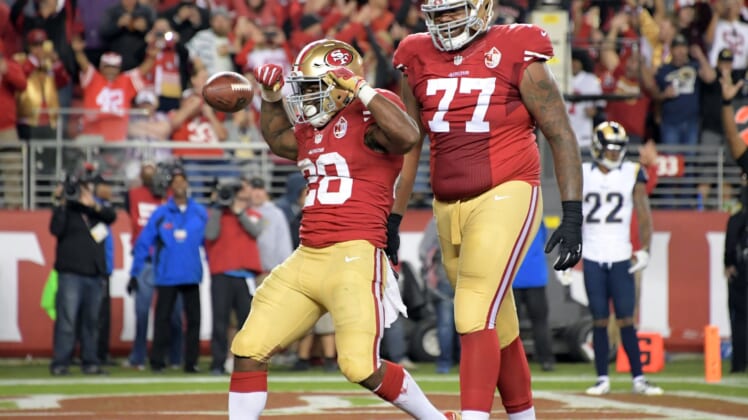 The San Francisco 49ers and New England Patriots have worked out yet another trade. It’s not of the blockbuster variety of the Jimmy Garoppolo deal, but it’s still rather interesting.

According to multiple reports, San Francisco has dealt starting right tackle Trent Brown and a fifth-round pick to the Patriots for their third-round pick.

The 49ers are trading OT Trent Brown and pick number 143 overall to the Patriots in exchange for pick number 95 overall, sources tell @AdamSchefter and me. The deal is pending a physical.

This comes after San Francisco selected Notre Dame offensive tackle Mike McGlinchey No. 9 overall in the 2018 NFL Draft Thursday night. It also comes with the Patriots needing help upfront with tackles Nate Solder and Cameron Fleming having moved on in free agency.

Brown, a seventh-round pick of the 49ers back in 2015, has been the team’s primary starting right tackle over the past two seasons. He’s also performed well in that role.

But a recent shoulder injury and Brown himself showing up to minicamp completely out of shape led to San Francisco drafting a replacement Thursday evening.