San Francisco 49ers quarterback Trey Lance is expected to miss about a week with a “small chip” in his finger, coach Kyle Shanahan announced Monday.

Shanahan did not say which finger is injured, but Lance was favoring his right (throwing) hand late in the first half of Sunday’s preseason finale against Las Vegas.

The rookie hit his hand on the helmet of a Raiders defender during a follow-through. He played one more series in the third quarter before coming out of the game.

“It wasn’t bothering him much, because he just thought it was jammed on a helmet,” Shanahan said. “And then when you get all the images on it — when they showed it to me, it’s a microchip of a bone that’s off. He chipped it, which is a small chip fracture, which is worse than a jam. That’s why it’s not going to just heal on its own. He can’t take snaps and do all that stuff right now. 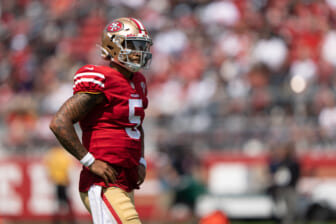 “We’re just going to rest it for seven days, they say, and that should make it heal and hopefully it’ll be good next Monday when we get into practice.”

Lance, the third overall pick in this year’s draft, is competing for playing time with veteran incumbent Jimmy Garoppolo. Lance went 19 of 41 for 276 yards this preseason, throwing three touchdown passes and one interception and adding a rushing score.

The 49ers open their regular season Sept. 12 on the road against the against the Detroit Lions.