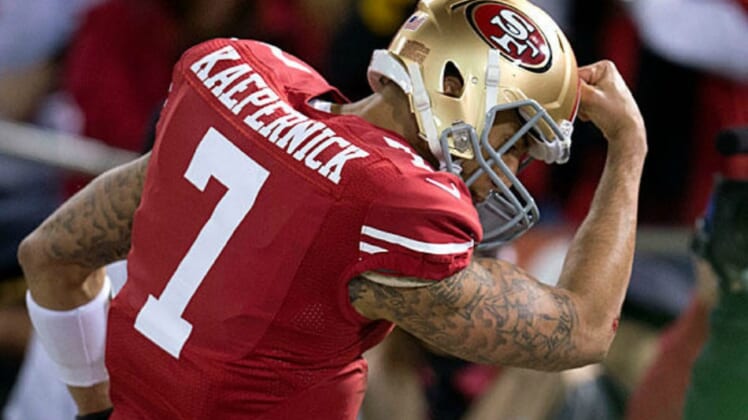 San Francisco 49ers general manager Trent Baalke dropped a bit of important news on Wednesday, revealing that quarterback Colin Kaepernick will be on the roster on April 1.

Matt Maiocco of CSN Bay Area passed along the quote, which is important because Kaepernick’s $11.9 million base salary becomes fully guaranteed at that time, according to Spotrac.

From many of us: Thank you, San Francisco.

The 49ers hired Chip Kelly — who the Philadelphia Eagles fired after two successful seasons and one awful year — to replace Jim Tomsula.

Most NFL viewers have a decided opinion about Kelly, either crediting him for bringing his zone-read spread offense from college into the NFL or bashing him for a complete failure while in charge of Philadelphia’s personnel.

Chalk that up to another wonderful lesson on mutual exclusivity, sometimes that is often forgotten in sports. Kelly was both a smart coach and a terrible man for the front office. Both are true.

Nevertheless, the 2015 season showed how limited Kelly’s offense can be without the proper quarterback running the scheme. Sam Bradford was a decent passer, but teams flat-out ignored the possibility he would pull the ball on a zone-read call because it simply never happened enough.

Kaepernick could thrive on that.

The primary issue, of course, is Kaepernick was a complete disaster in 2015 after Jim Harbaugh was pushed out of San Francisco and returned to coach his alma mater Michigan. Kaepernick consistently failed to progress beyond his first read, airmailed sideline routes and short-hopped a couple passes.

However, Kelly’s simplified offense is theoretically the ideal fit for Kaepernick, whose confidence was undoubtedly shaken before he underwent season-ending shoulder surgery as well as two other procedures.

Assuming the 49ers don’t trade Kaepernick after April 1, yes, he still must beat out Blaine Gabbert for the starting job. Should that happen, though, we’ll finally see the potential of Kelly’s offense.

After all, the Eagles finished 10-6 in both 2013 and 2014 while Nick Foles and Mark Sanchez were behind center. Foles was more willing to carry out the run-pass options, but he wasn’t speeding away from defenses like Kaepernick showed en route to earning his massive contract.

San Francisco has a chance to show Kelly’s offense still works. Kaepernick has the optimal skill set to test that theory.

Besides, if Kaepernick fails, the franchise can release him after the season and before April 1, 2017, saving four years and many millions. They might prepare for that possibility by drafting a quarterback with the No. 7 overall pick in the 2016 NFL draft, too.

The 49ers aren’t going to win a Super Bowl this year. Why not give Kaepernick a shot under Kelly? The results could be outstanding.