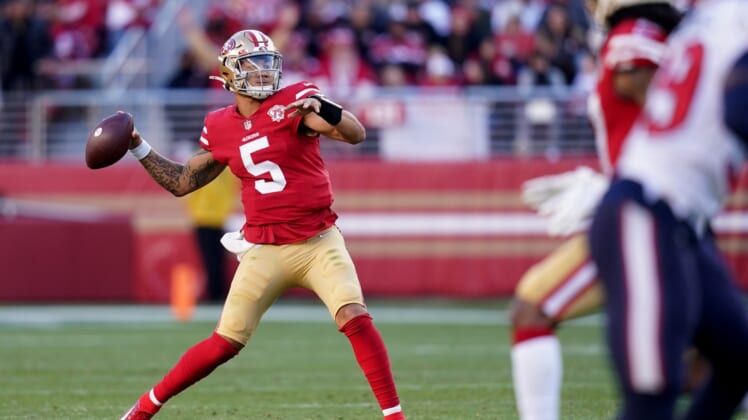 The San Francisco 49ers and Los Angeles Rams could have everything, something or basically nothing at stake when they wrap up the NFC portion of the NFL’s regular season Sunday afternoon in Los Angeles.

Both teams enter the final weekend in playoff position, with the Rams (12-4) leading the NFC West by a game over the Arizona Cardinals (11-5), while the 49ers (9-7) currently hold the second of three NFC wild-card spots.

A Cardinals loss Sunday afternoon to the Seattle Seahawks could allow the Rams to clinch the division title even before completing their game against San Francisco.

At the same time, if the New Orleans Saints (8-8) were to lose in the afternoon to the Atlanta Falcons, the 49ers would clinch a wild-card spot regardless of their outcome in L.A.

Those results, in retrospect, would render the 49ers-Rams game generally meaningless, except for the fact that it’s possible the clubs could meet again next week in a rematch in the first round of the playoffs.

Under that scenario, the 49ers, who have won five in a row against their longtime California rival, could gain a psychological edge with a third consecutive season-series sweep and a third straight win in LA.

San Francisco coach Kyle Shanahan, citing current key injuries, the COVID unknown and the general parity among the NFL’s top teams, said this week the door is wide open this season for any playoff team to walk away with the hardware.

“The goal to me is always: Just to get in,” he professed. “Because if you get in, you got the shot. I’ve always felt like that, and it seems pretty strong this year, too.”

Despite having won six of their last eight games, the 49ers aren’t assured of one of the NFC’s seven berths yet. They would need a Saints loss or a win or a tie against the Rams.

Victories by the 49ers and the Philadelphia Eagles (9-7) would have them finish with the same record, with San Francisco owning the tiebreaker (and claiming the No. 6 playoff seed) due to an earlier win at Philadelphia.

That was Jimmy Garoppolo, who suffered a partially torn ligament in his right thumb in the Week 16 loss at Tennessee. He sat out last week’s 23-7 home win over the Houston Texans, a game in which prized rookie Trey Lance threw for 249 yards and two touchdowns.

Shanahan has indicated that Garoppolo, if deemed healthy, would get the start against the Rams. It figures to be a game-day decision.

The Rams, meanwhile, have won five in a row to clinch a playoff spot in the NFC. With a win over the 49ers, they could wind up seeded as high as No. 2 behind the Green Bay Packers. With a loss, they could drop into the first wild-card spot.

Rams coach Sean McVay’s biggest decision Sunday, short of possibly pulling key players early should the Cardinals lose, figures to be whether to play star running back Cam Akers for the first time this season.

Akers suffered a torn Achilles in July and returned to practice last week.

“I think he’s ready,” McVay declared. “He’s got a chance to be able to contribute. This is a pretty cool story.”

So is the story of Rams wideout Cooper Kupp, who needs 136 receiving yards to pass Calvin Johnson (1,964 in 2012) for the most in a single season in NFL history and 12 catches to break Michael Thomas’ record (149 in 2019) for receptions in a year.