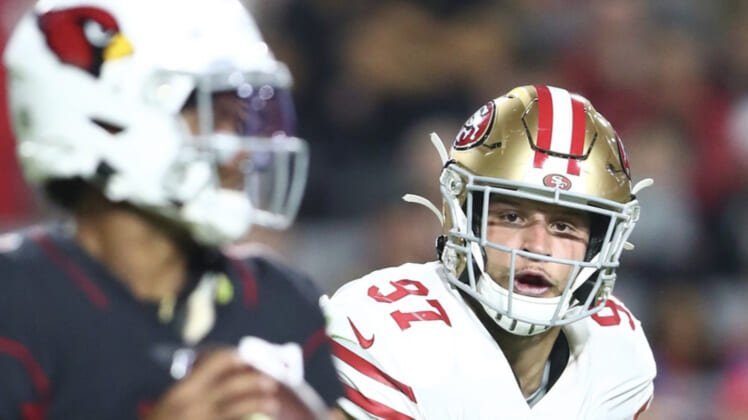 It’s one of those things that seemingly worked out for both division rivals. The Arizona Cardinals finished the 2018 season with a 3-13 record, earning the No. 1 overall pick in the following year’s draft. The San Francisco 49ers went 4-12 and were slated to pick second in the 2019 NFL Draft.

The rest is pretty much history here. Arizona selected then reigning Heisman winner Kyler Murray with the first pick. San Francisco quickly ran to the podium and picked up Ohio State edge rusher Nick Bosa with the second selection.

The Cardinals needed a franchise quarterback. San Francisco believed it had one in Jimmy Garoppolo and had to upgrade its pass rush.

While Murray was turning in a tremendous rookie season in the desert, Bosa helped his 49ers to a 13-3 record. He then recorded a combined three sacks in two NFC Playoff games en route to helping San Francisco to a shocking appearance in Super Bowl LIV.

In talking about his team’s surprise run to the title game, 49ers CEO Jed York pointed to Arizona’s selection of Murray as the time he knew San Francisco could make it to the Super Bowl.

“When Arizona drafted Kyler Murray,” CEO Jed York said, via MMQB’s Albert Breer. “We were hoping that Nick [Bosa] was gonna be there. You know that Kyle has an amazing offensive mind. But when you can put the horses on defense the way we have, build a championship-caliber defensive front [next to that], you have a chance. And I know the culture is right, and that’s what Kyle gets more than anything.”

Some might take this as a slight directed at Murray. It isn’t. The 49ers were never going to go quarterback at the top of the 2019 NFL Draft, even if they had “earned” the No. 1 pick. Adding someone of Bosa’s ilk on defense changed the entire dynamic here.

Bosa and the 49ers are now one win over the Kansas City Chiefs in Super Bowl LIV from earning their sixth Lombardi in franchise history.