49ers go into matchup vs. Texans with uncertainty at QB 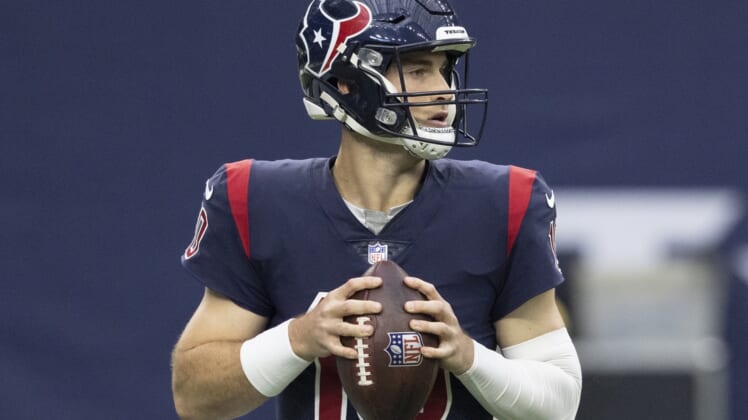 The San Francisco 49ers will go into a critical matchup against the Houston Texans with uncertainty at the quarterback position when the clubs meet Sunday afternoon in Santa Clara, Calif.

The 49ers (8-7) enter Week 17 tied with the Philadelphia Eagles for the sixth-best record in the NFC, with three other teams — the Minnesota Vikings, Atlanta Falcons and New Orleans Saints — just a game behind. San Francisco finishes the regular season on the road against the Los Angeles Rams.

At the other end of the spectrum, the Texans (4-11) will take the field tied with the New York Jets and New York Giants for the third-worst record in the league. They will be looking to extend their season-best winning streak to three.

The 49ers used part of their preparation time this week determining whether starting quarterback Jimmy Garoppolo would be healthy enough to face the Texans.

Garoppolo sustained a Grade 3 sprain in his right thumb during on Dec. 23 during San Francisco’s 20-17 road loss to the Tennessee Titans. He threw one touchdown pass and two interceptions in the game, playing more than half the contest after getting hurt late in the second quarter.

No surgery was deemed necessary, and 49ers coach Kyle Shanahan was prepared to examine Garoppolo’s passing accuracy on a day-to-day basis leading into possibly a game-time decision Sunday.

Garoppolo missed one other game this season with a strained calf. Rookie Trey Lance got the start in a 17-10 home loss to the Arizona Cardinals in Week 5, throwing for 192 yards with one interception while rushing for a team-high 89 yards.

Shanahan insisted during the week that he is confident in Lance and in his team in general if the club must turn to the rookie again.

“I think we can handle anybody being hurt, but you still have to go out and play good football to get a win,” he said. “And it’s not just the quarterback, it’s everybody.”

The 49ers are hopeful of getting leading rusher Elijah Mitchell back from a knee injury in time to face the Texans. In the rookie’s third straight absence, San Francisco was held to 83 rushing yards in the Tennessee loss.

The Texans put up a season-best point total in a stunning 41-29 home win over the playoff-hopeful Los Angeles Chargers last week. Davis Mills threw for 254 yards and two TDs while Rex Burkhead rushed for 149 yards and two scores in the win.

The trip to the San Francisco Bay Area represents a homecoming for Mills, who played his college ball at Stanford.

If the game turns into a duel between rookie quarterbacks, Texans coach David Culley likes the chances of his experienced guy (nine starts after having been the No. 67 overall selection of the draft) over a one-start rival who was selected 64 picks earlier.

“He never gets rattled,” Culley said of Mills. “He has that calm demeanor about him. He’s always thinking about things and he’s always learning.”

The interconference rivals will be meeting for just the fifth time, with the 49ers having prevailed in three of the first four, including 26-16 in the most recent meeting, at Houston in December 2017.