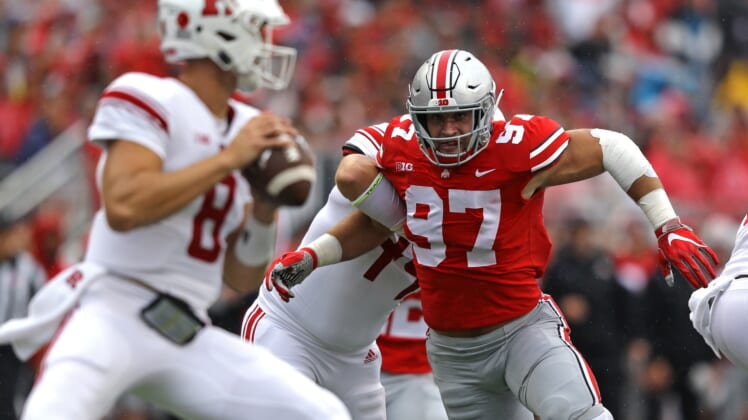 This past season took a bad turn early, but a poor record gives the San Francisco 49ers quite the envious position near the top of the 2019 NFL Draft board. With the second pick overall in Round 1, the 49ers draft picks in 2019 should propel Kyle Shanahan and Co. to greater heights next year.

What’s slightly maddening for some fans is that the 49ers would have landed the top pick overall if only they hadn’t been so intent on raining on Seattle’s parade back in Week 15.

Some folks were pretty upset about that victory because it gave the NFC West rival Arizona Cardinals the top pick, among other reasons. That’s something we’d love to hear about in the comments section: Is winning that game more important than landing the top pick?

In the end, however, the No. 2 overall pick is going to work out quite nicely. There are a number of things GM John Lynch can do with that pick, which we’re about to explore here.

What’s the biggest problem the 49ers have had offensively the past two years? Red-zone scoring offense. They were the sixth-worse in the league last year and dead last in 2018, converting touchdowns just 41 percent of the time.

The best way to fix red-zone woes is to grab a big-bodied receiver with mad ball skills and athletic prowess — the kind of player who makes 50-50 balls look more like 90-10 balls. The premier red-zone monster in this year’s draft is Harry, who is a physical freak of the first order.

VIDEO: ASU wide receiver N'Keal Harry scores the only touchdown of the game in 16-13 upset against No. 13 Michigan State pic.twitter.com/D7bo2wJjTE

What makes him even better for Shanahan’s system is that Harry is also a dynamic run-after-the-catch player.

Arizona State WR N'Keal Harry is one of the more intriguing prospects in the 2019 class. He's exceptional at the catch point and as a play-maker when he gets it in his hands quickly. pic.twitter.com/2kBWOWfcL4

Taking Harry at No. 2 overall would probably be considered a big stretch by many. But teams are going to fall in love with him after he tests at the combine, and if the Niners are one of those teams, they shouldn’t hesitate to scoop him up.

I know. I know. The 49ers have been loading up on the defensive line like crazy in recent years. Solomon Thomas, Arik Armstead, DeForest Buckner. Do they really need another high-pick lineman here?

That’s something you’ll have to decide for yourself. What we know for sure is that Williams is an offensive lineman’s worst nightmare. This is a dude who can have an Aaron Donald-type impact on the game due to his ability to bring pressure from the defensive tackle spot.

Just imagine Williams lined up next to Buckner — then clean up the drool puddle on the floor. And this kid isn’t just a dynamic player, he also has shown some sage wisdom off the field, too.

The 49ers could do a lot worse than adding strength to strength, even if the greater “need” here is on the edge, rather than in the middle of their defensive line.

One of the biggest reasons the 49ers struggled so much defensively this past season is that the cornerbacks not named Richard Sherman were atrocious for the most part.

Adding another elite corner to this unit would significantly upgrade the team’s ability to shut down opposing passing attacks. And playing in the NFC West where the Los Angeles Rams and Seattle Seahawks can seemingly conjure big passing plays at will, this is a key area of concern that needs to be fixed right away.

Williams is a phenomenal prospect who epitomizes DB U — aka: LSU. He’s long, has the speed and athleticism to hang with top-end receivers and is exceptionally gifted playing the ball in the air.

Really, Williams is the perfect young cornerback to bring in and be tutored by Sherman for the next year or two. He’d instantly give the 49ers a dynamic 1-2 punch on the perimeter and would certainly help with the team’s problem of creating turnovers.

Bringing pressure off the edge was agonizingly difficult for the 49ers to do in 2018. Their leading sack man was DeForest Buckner, who had 12. Nobody else on the team had more than 5.5. Clearly, landing an elite edge rusher this year is a top priority.

If the 49ers stay at No. 2 overall, and assuming the Cardinals don’t take Bosa, he’s an easy choice. Explosive off the edge, he has a strong repertoire of moves and is relentless in his pursuit of bringing pressure.

The concern with Bosa has to be that he was injured and needed “major surgery” to repair a core muscle. Combined with his older brother’s injury history with the Los Angeles Chargers, one might be inclined to wonder if the Bosa boys are injury prone.

But if John Lynch is confident in his health, and he’s there at No. 2 overall, then nobody would really argue that Bosa’s a home run pick here.

If I had my druthers, John Lynch would work hard to trade down. Especially if Dwayne Haskins declares (at this point he’s still undecided). There are too many quarterback-needy teams out there that will be more than willing to part with two first-round picks to land the top quarterback in the draft.

Looking at the top 10, it isn’t crazy to wonder if Oakland might be looking at an upgrade at quarterback — Mike Mayock’s recent comments about Derek Carr were eye-opening — and then you have Tampa Bay (okay sure they’re bringing back Jameis Winston, but he’s on thin, thin ice), the New York Giants, and Jacksonville Jaguars all in position to push for a quarterback.

Trading down with any of these teams could still lead to the 49ers being in prime position to draft Josh Allen out of Kentucky, who has Chandler Jones-type potential off the edge.

He’s also one of the most confident young men we’ve seen in years and has a chip on his shoulder the size of Mt. Everest.

Just like we saw two years ago when the 49ers moved down just one spot in a trade with Chicago, these deals can be incredibly lucrative. That’s the way I’d play it if I were in control, because Arizona isn’t likely going to trade down and the 49ers will hold the power card in this year’s deck.