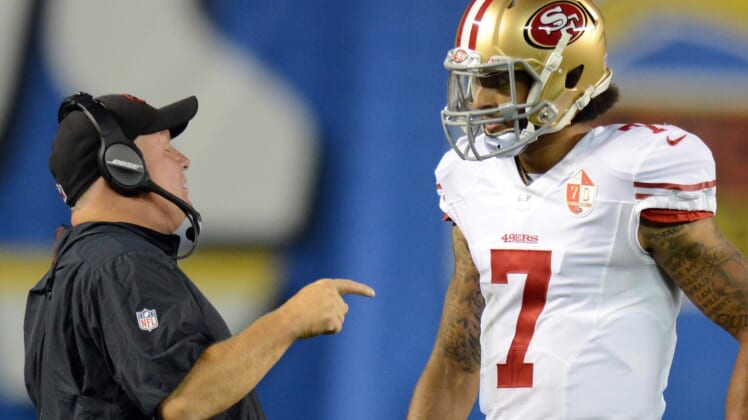 It took a bit longer than most anticipated, but the San Francisco 49ers and quarterback Colin Kaepernick have agreed on a restructured contract.

The restructure essentially turns Kaepernick’s contract into a two-year deal and gives him an ability to void it after this season. In turn, the $14.5 million in injury guarantees San Francisco was to pay to Kaepernick is now eliminated.

“The reworked Kaepernick contract gives him the option to void the deal after the 2016 season. The restructured pact eliminates roughly $14.5 million in injury guarantees for 2017 and dissolves the final three years of a six-year deal that previously kept him under contract through 2020, Rapoport adds. Kaepernick’s contract is now essentially a two-year deal.”

It’s a smart move for both sides. Kaepernick wouldn’t have seen the football field without agreeing to a restructure. If that had not happened, he would have been given the Robert Griffin III treatment.

On the other hand, San Francisco needed to find a way to replace an ineffective Blaine Gabbert under center. That became a reality when Chip Kelly named Kaepernick the starter on Wednesday (more on that here).

If Kaepernick had not agreed to the restructure, he would have likely been released in March. Without seeing the field and with all the controversy surrounding his national anthem protest, the value for him on the free-agent market wouldn’t have been there.

Conversely, if he finds a way to catch lightning in a bottle, there’s always value in a talented quarterback in today’s NFL.

Kaepernick’s final opportunity to show himself capable of holding down a starting gig begins Sunday against the Bills in Buffalo.