49ers can supercharge offense thanks to DeForest Buckner trade 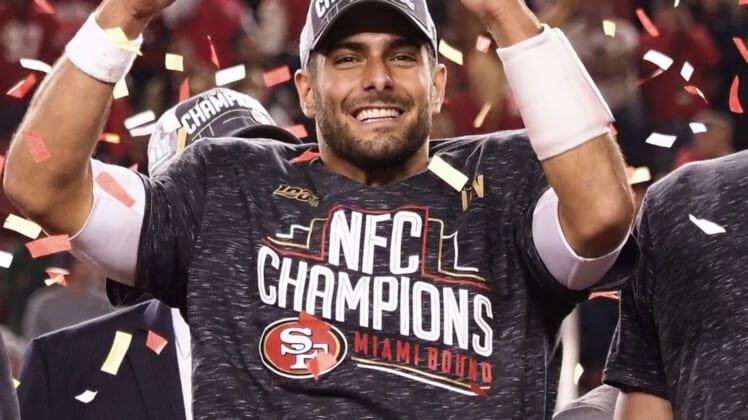 The San Francisco 49ers stunned the NFL world with a trade Monday, sending DeForest Bucker to the Indianapolis Colts for a first-round pick.

This move gives the franchise the perfect opportunity to supercharge its offense and continue chasing after a sixth Super Bowl victory.

The trade: The 49ers landed the Colts’ first-round pick (No. 13 overall) in the Buckner trade. This gives them two first-round picks, which they can either use or turn into more draft currency in trade-down scenarios.

For the sake of this article, we’re exploring what the 49ers can do if they stand pat and use their two first-round picks.

Kyle Shanahan must be drooling: It’s a well-known fact that the 2020 NFL Draft is loaded with premier talent at the wide receiver position.

Given the fact that so many teams need quarterbacks, and that we’re expecting a run on offensive tackles in the top-10 of the draft, this sets the 49ers up perfectly to land one of the best — if not the best — receiver from this year’s class.

The Colts’ offering: Here’s a look at three receivers the 49ers could land with the 13th overall pick, acquired in the Buckner trade:

Bringing in one of these three receivers would give the 49ers an incredible boost in offensive firepower — the one thing that they lacked in the Super Bowl this past February.

The 49ers’ original pick: Assuming the 49ers did stand pat and kept the No. 31 overall pick of the 2020 NFL Draft, they have a chance to continue building their offense into a juggernaut.

Here is a player that could significantly improve what’s already one of the NFL’s most-dominant rushing offenses:

If the 49ers were to continue building up their receiving corps, there are a couple dynamic players who could be available here.

The 49ers could certainly trade down here, or with their other first-round pick. But regardless of what they decide to do with their two first-rounders, they are set up to add impact players.

The bottom line: The 49ers aren’t missing much when it comes to fielding an overall dominant roster. The arrival of Deebo Samuel last year was a huge reason why the offense had as much success as it did, and of course George Kittle is in a class of his own as the best tight end in football.

But if they can add another dynamic playmaker in the passing game and upgrade their offensive line, then this team’s offense will be just as dangerous as its defense.

And that’s a scary prospect for the rest of the NFC.