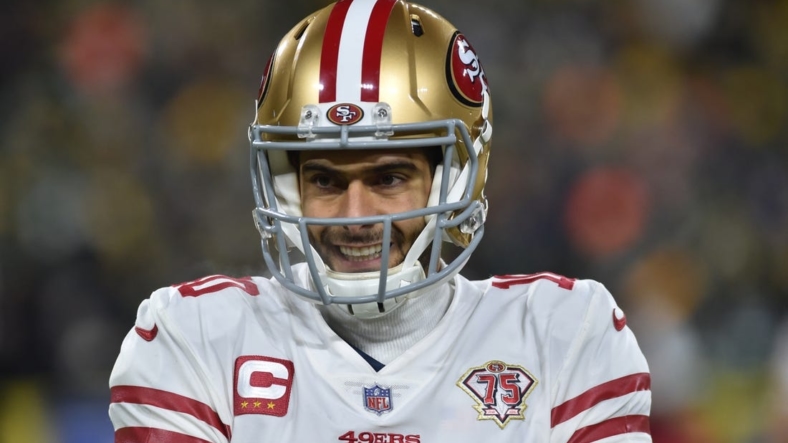 49ers head coach Kyle Shanahan thanks the rest of the NFL for passing on quarterback Jimmy Garoppolo this offseason.

“The rest of the league had a chance to get him,” Shanahan said on Tuesday, sternly rejecting the idea San Francisco didn’t want their former starter to stick around. “There aren’t 32 starting quarterbacks in the NFL, and we believe we have two of them.

“We have a starting quarterback as a backup. The rest of the league had a chance to get him, and I feel so fortunate that they didn’t.”

Lance was informed months ago he would be the starting quarterback in 2022 after biding his time behind Garoppolo as a rookie last season.

“When I told Trey that Jimmy’s coming back, he said ‘Awesome,'” Shanahan said. “There was no relationship to mend.”

Garoppolo is on the mend from offseason shoulder surgery but has 45 starts with the franchise since being acquired from the New England Patriots.

His salary, reportedly trimmed to $6.5 million, is the highest in the NFL for a No. 2 quarterback unless a team unexpectedly shifts its depth chart before Week 1.

With no NFL team offering what the 49ers suggested — or perhaps expected — and Garoppolo’s agents satisfied that the door was closed on starting opportunities this season, they approached him about staying put at a reduced salary. The contract allows Garoppolo to leave in free agency after the 2022 season, but he forfeits the majority of his scheduled base salary of $24 million.