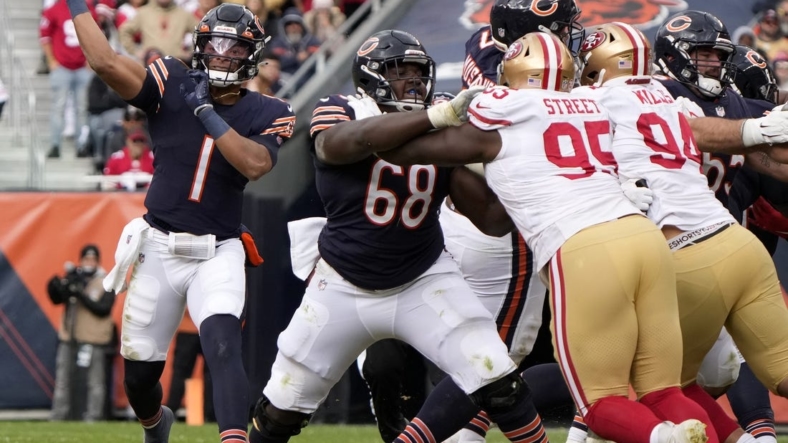 Justin Fields proverbially circled Sunday’s game against the San Francisco 49ers because it marks the opener of his first full season as a starting quarterback in the NFL.

That visiting San Francisco passed on selecting Fields in the 2021 NFL Draft hardly will have a bearing on Fields when Chicago hosts the 49ers on Sunday afternoon.

“We’re not worried about last year’s draft,” Fields said. “‘Oh, this team passed on me.'”

An emerging bond with coaches and teammates old and new has the second-year signal-caller feeling optimistic about the new season.

“My guys in the locker room. … Playing for my teammates, playing for my coaches and going out and executing to the best of my ability,” Fields said on his motivation.

In 12 games as a rookie, including 10 starts, Fields passed for 1,870 yards, seven touchdowns and 10 interceptions while rushing for 420 yards and two scores.

Fields will be facing a fellow second-year pro in San Francisco quarterback Trey Lance, who takes over the starting job from veteran Jimmy Garoppolo.

Although Garoppolo steered San Francisco to the NFC Championship Game a season ago, the 49ers have opted for Lance, a North Dakota State product, under center following training camp.

“Trey’s in as good of a spot as I’ve been around him,” 49ers coach Kyle Shanahan said. “He’s confident, had a good camp, got as many reps as he’s ever gotten before. He’s been thrown in a ton of tough situations, good situations, and now it’s time to go play.”

Lance played in six games as a rookie, making two starts, while throwing only 71 passes. He accounted for six total touchdowns, including five through the air, passing for 603 yards and rushing for 168.

To be sure, the 49ers like Lance’s mobility and versatility, which are attributes of dual-threat wide receiver Deebo Samuel.

Samuel ranked third in the NFL in 2021 with a career-best 1,770 scrimmage yards while becoming the first player in league history to gain at least 1,400 yards receiving and 300 yards rushing in a single season. The first-time All-Pro ran for eight touchdowns, the most by a wideout in a single season in NFL history.

Samuel had 171 receiving yards against the Bears last season, helping the 49ers to a 33-22 road victory in Week 8. Elijah Mitchell, then a rookie, ran for a career-best 137 yards with a TD.

The 49ers may be without three-time Pro Bowl tight end George Kittle, who suffered a groin injury in Monday’s practice. Shanahan said Wednesday that Kittle was day-to-day.

Fields ran for a career-high 103 yards on 10 carries against San Francisco last season while contributing a passing and rushing touchdown apiece.

That effort came on an arguably shoddy surface at Soldier Field. The Bears since have installed Bermuda grass that Eberflus said should be more durable, especially in colder weather later in the season.

Chicago hopes that also bodes well for a pass rush led by Robert Quinn, who paced the NFC with 18 1/2 sacks last season.

The all-time series between the Bears and 49ers is tied 32-32-1. San Francisco has won two of the past three meetings.