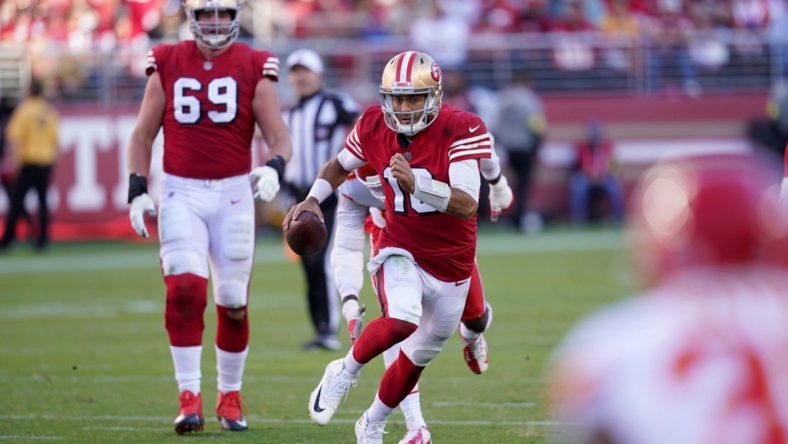 A pair of longtime NFC West rivals will meet on Halloween eve, but there will be zero fear from the San Francisco 49ers.

The 49ers travel south for a matchup against the Super Bowl champion Los Angeles Rams and not even a two-game losing streak, to go along with a losing record, can tamper San Francisco’s strut into Sunday’s game at Inglewood, Calif.

The 49ers (3-4) have won seven consecutive regular-season games against the Rams (3-3), and even though it was Los Angeles that got the best of last season’s NFC Championship Game matchup, San Francisco had a retort earlier this month.

The 49ers managed to bully the Rams into submission on Oct. 3 with a 24-9 home victory led by a relentless defense and some punishment dished out by hybrid sensation Deebo Samuel.

But the 49ers enter off consecutive defeats, including a punishing 44-23 loss at home last Sunday to the Kansas City Chiefs.

“It’s frustrating and I really don’t think we have played together as a team, offense and defense, yet,” Niners star defensive end Nick Bosa said. “So we need to get clicking on all cylinders if we’re going to make a run this year.”

The 49ers also were 3-4 last season, further dropping to 3-5, before making their payoff run. That resurgence began with a 31-10 victory in Week 10 over the Rams.

The 49ers’ hope new addition Christian McCaffrey can trigger a repeat revival. In his first game with the team after a trade from the Carolina Panthers, the running back gained 38 yards on eight carries and had two catches for 24 yards in limited usage.

“It was a weird week for me and for them; I didn’t know what to expect,” said McCaffrey, who joined the 49ers last Friday. “… I think for me, mentally, this was just control what I can control and get rolling.”

The Rams have been trying to get rolling all season. With injuries on the offensive line, Los Angeles is coming off a much-needed bye week. It entered its downtime with a solid 24-10 victory over the Panthers, in a game that included McCaffrey.

But the Rams preceded that with a 22-10 loss to the Dallas Cowboys when Stafford was sacked five times and threw an interception. Los Angeles has scored 17.3 points per game, fourth from the bottom in the NFL.

Rams center Brian Allen (knee), who anchors the offensive line, did return to practice Wednesday, but was limited. He is expected to play.

Also back at practice for the Rams, although limited, was wide receiver Van Jefferson (knee), who hasn’t played this season. He is expected to see action Sunday.

“Obviously, he brings a big-play element, but I think Van is a complete receiver,” Rams coach Sean McVay said. “I think he showed that with the way he was progressing, really throughout last year and especially where he was at in training camp.”

While a 3-3 start to the season has been far below the Rams’ expectations, they did have an 0-3 stretch last November yet still made a championship run. At issue is a rushing attack that is second-worst in the NFL with 70.5 yards per game.

The Rams had interest in McCaffrey before he went to their rivals. Darrell Henderson Jr. is carrying the running back load now, but has just 181 yards in six games. He was out Wednesday with an illness.

While Samuel was the star of the 49ers’ show the last time the teams met, he did not practice Wednesday with a hamstring injury. Also out of practice were defensive linemen Arik Armstead (foot, ankle) and former Ram Samson Ebukam (Achilles).