5 Raiders takeaways from 33-22 win over the Eagles 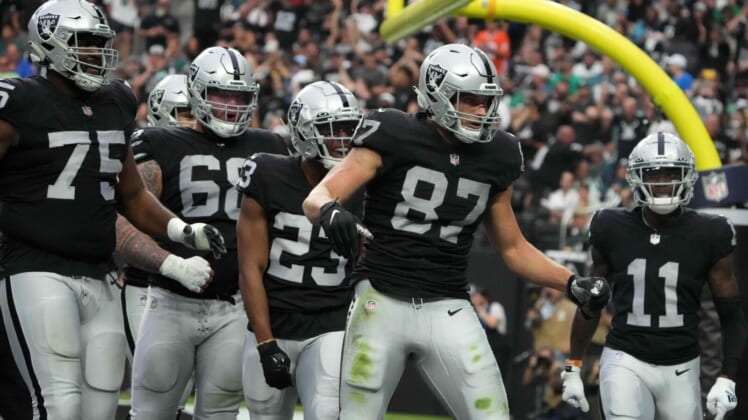 The Las Vegas Raiders (5-2) continue to rally around one another after the loss of their head coach and have now won two-in-a-row heading into the bye week and seemingly gelling in so many ways and buying into interim head coach Rich Bisaccia’s plan for the rest of 2021. When looking at key Raiders takeaways from Sunday’s win, we start with Las Vegas’ with the impact the coach has had on his players and their resurgence early in 2021.

No one wanted this season to go the way it has with the Jon Gruden debacle and the sudden change to an interim head coach in Rich Bisaccia. That said, whatever it was that happened to this team under the duress of losing its head coach and overall boss over the football operation, it’s worked wonders. The offense is simpler, snappier, and utilizes its talent more efficiently and effectively. The defense, which had already taken several steps forward with the arrival of Gus Bradley, looks even more focused and swarms to the ball. While the Raiders aren’t a perfect team and need help (the run defense is still awful), the unification of the locker room after the resignation of Gruden is striking – and perhaps telling. The Raiders now head into the bye week at 5-2 with all sorts of momentum.

Raiders takeaways #2: Derek Carr is back to dealing and looks elite

After a shaky start and a costly interception, Carr finished the first half completing 16 of 17 passes and finished 21-of-23 for 215 yards and one touchdown. In the second half, Carr finished the game going 31-of-34 for 323 and two touchdowns. Carr’s 91.2% completion rate was mindblowing and the best of his career. Carr’s continued elite-level play means the Raiders offense continues to hum along. Even missing his favorite target in tight end Darren Waller who missed the game with an ankle injury, Carr spread the ball around and found Waller’s replacement Foster Moreau six times for 60 yards and one touchdown. Derek Carr is one of the Raiders key takeaways and is now playing at a Top 10 level, and it shows.

One of the Raiders biggest defensive acquisitions in the offseason — Yannick Ngakoue— finally had his breakout game. For those who have watched the EDGE rusher all year, you know he’s been contributing greatly but hasn’t been the star of the show until today against the Eagles. Ngakoue had two sacks, two QB pressures and was literally Eagles quarterback Jalen Hurts’ Halloween nightmare this week. Along with partner in crime Maxx Crosby, Ngakoue has found himself again as a dominant EDGE player in the NFL.

The old football saying of “your best ability is your availability,” is something you should be saying to yourself when considering the Raiders talented young running back Josh Jacobs and why the signing of Kenyan Drake this offseason was so key. Jacobs was, again, injured (chest injury) in the win over the Eagles and his status for next week will be day-by-day. In his place, Drake shined in the second half including scoring a touchdown finishing the day with 69 yards rushing on 14 carries and another 10 yards on three receptions. Drake’s contribution is immeasurable especially with the inconsistency of Jacobs’ availability due to injury.

Raiders takeaways #5: Keeping it simple on offense has made all the difference for the Raiders

This last of the Raiders key takeaways could have been listed first as its impact has been huge for Las Vegas. With Gruden gone, offensive coordinator Greg Olson simplified the playbook — particularly the use of personnel sets in the offense. By riding the game plan of Gruden’s more complex sets, Olson has focused on running more standard sets utilizing the team’s best talent. That includes the proper use of Henry Ruggs III, Bryan Edwards, and Kenyan Drake. It also has meant Derek Carr has now returned to his early-season form and played two of his best back-to-back games in recent memory. As it turns out, one of the criticisms of Gruden as a play-caller looks to have had merit as Olson’s approach has made a huge