4 Raiders takeaways from an ugly loss to Bears 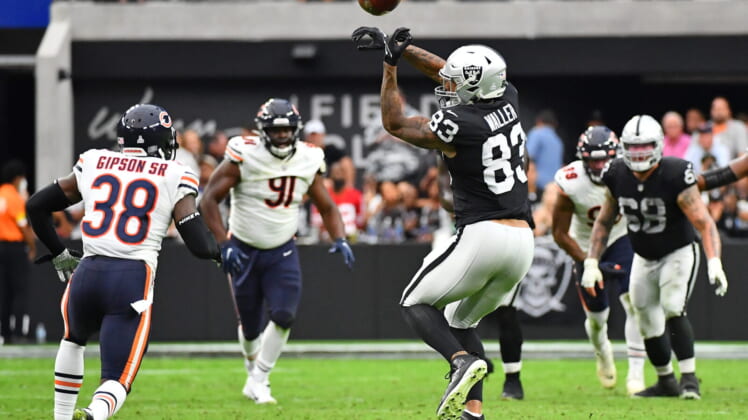 After a blazing 3-0 start where the NFL world was talking about Derek Carr as an early MVP candidate, the Las Vegas Raiders have not only tripped but they’ve fallen and one can only wonder if they can get up. After an ugly first half in their loss to the Los Angeles Chargers in Week 4, they made a valiant effort to mount a fourth-quarter comeback that fell short. Many wondered how this Raiders team would respond to the adversity that comes with losing a big game. If our Raiders takeaways from Week 5’s loss are any indication, there could be bigger problems on the horizon.

The listless Raiders started terribly and only mustered a few drives that were coherent in a 20-9 loss at home to the Chicago Bears on Sunday. Many wondered how the Raiders would respond on a short week after a tough loss and it didn’t end well. Add a late-week distraction around coach Jon Gruden’s 11-year-old email using a racially-tinged insult, and it’s not surprising the team looked unfocused, undisciplined and absent.

Gruden’s offense has now gone 11-straight games without a score on an opening drive and the offense has scored just three touchdowns the past two weeks.

Here are our 4 Raiders takeaways from Week 5.

As well as Derek Carr played in the Raiders first three games, the weakness on the offense has always been a patchwork offensive line filled with second-teamers and unproven young players. Not only does the offensive line have trouble protecting Carr, but it also does little to help Josh Jacobs and the running game and has a propensity to get flagged for penalties — especially on key third downs. Every week of the 2021 season, the Raiders offense has failed to get off to a good start. Gruden’s offense has now gone 11-straight games without a score on an opening drive and the offense has scored just three touchdowns the past two weeks. Alex Leatherwood was moved from right tackle to right guard and struggled just as much in the loss to the Bears. The line is a mess and the Raiders don’t seem to have much of an answer on how to fix it. That’s all expected as the Raiders failed to address the turnover on the line despite the drafting of Leatherwood. Carr has regressed in two weeks and seems out of sync as well. This team can’t win with an offense that can’t help its own defense.

Raiders Takeaways #2: Raiders were not focused, but why?

While it might be easy to point to the Gruden email fiasco this week, and that may play a small part, many of the issues that cause them trouble against the Bears have been happening all season. That includes a lack of solid tackling on defense and continued costly penalties on both sides of the ball. When asked about the week of practice leading up to the Bears game, Carr said they were good and no one had any issues through the week. Still, dropped passes by Darren Waller and Bryan Edwards stalled possible productive drives and doomed the Raiders offense. This Raiders takeaway is concerning and lands at the feet of Gruden and his staff. It’s the NFL – there are no days or weeks off.

Raiders Takeaways #3: AJ Cole is having an amazing season

I know, I know — just what you want to hear. AJ Cole is having a hell of a year. Along with the improved (but imperfect) Raiders defense, he is another reason why they are even in these games with their dysfunctional offense. Cole ranks second in punting overall in the league with a 52.3 per punt average and has the season’s longest punt at 70 yards. Cole has been used too much, which isn’t good for the team, but he has made a difference and given the revamped Raiders defense a longer field to defend. When key Raiders takeaways include one about their punter, well, you get it.

Raiders Takeaways #4: Penalties are killing the Raiders on offense and defense

We don’t want to kick the proverbial dead horse that is the team’s struggles on the offensive line, but penalties upfront have piled up and the timing of those penalties exasperates the problem. Three times in the loss to the Bears, the Raiders offensive line was flagged on key third down and short situations. That killed momentum and led to punts and a change of possession. While there have been questionable calls here and there, most of these penalties have been unforced errors. The lack of focus and discipline makes the lack of talent up front an even bigger headache. They’ve also been flagged plenty on defense for unsportsmanlike conduct (twice against the Bears early) keeping opponent’s drives alive. The Raiders now rank third in the NFL in penalties with an average of eight per game trailing only the Eagles (50) and Buccaneers. Against Chicago, the Raiders racked up 10 penalties for 82 yards. The Raiders rushed for only 71 yards on the day.