4 Raiders takeaways from 34-24 win over Broncos 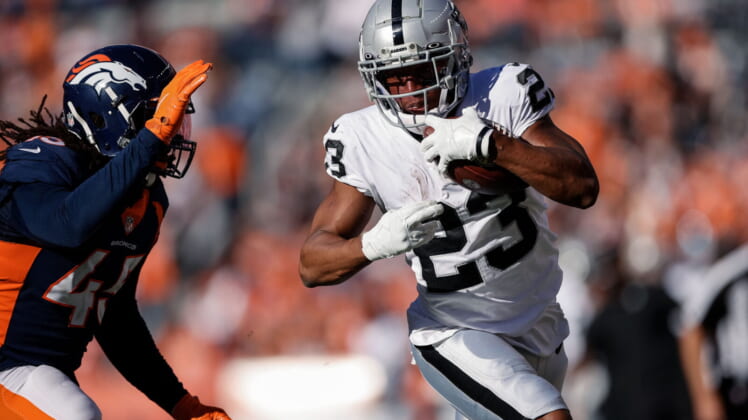 No one knew how the Las Vegas Raiders would react after a tumultuous week that saw the team lose its head coach and capture national headlines for all the wrong reasons. Could the team that had lost focus during a two-game losing streak find it amid the madness?

The answer was a resounding yes as the never-say-die Raiders played their most complete game of the season to move to 4-2 on the season and into a first-place tie atop the AFC West. Here are our X Raiders takeaways from the Raiders big 34-24 win in Denver on Sunday.

Raiders takeaways #1: Team unity is everything

The Gruden bombshell would have disrupted the best and most veteran of teams. Losing your coach and figurehead under controversial circumstances made it even more difficult for a team in the middle of a losing streak. Yet interim head coach Rich Bisaccia and the Raiders players game together, focused on football and improved week over week to earn a huge divisional win on the road. It can’t be overstated how much the players and coaches deserve credit for not only getting through the rough week but also for how they regained their football momentum and overcame massive amounts of adversity to beat the Broncos. Of this week’s Raiders takeaways, this is the one that means the most for fans and the men in the locker room.

Raiders takeaways #2: Carr and offense get off to a fast start

The long, painful Raider Nation nightmare is over: Las Vegas scored on their opening drive for the first time in 12 games. Derek Carr got off to a fast start finding Henry Ruggs III on a 48-yard bomb to give the Raiders a 7-0 they never relinquished. New play-caller Greg Olson simplified the offense and sets to give the Raiders a new punchy rhythm that just worked. Olson helped the Raiders run the ball better using the team’s most underused weapon in Kenyan Drake. Drake not only got touches running the ball but also had a beautiful 31-yard touchdown reception down the sideline to give Las Vegas a 17-7 lead in the second quarter. Olson’s ability to run the ball better meant he was able to dial up more of the play-action passing game which helped Carr pass for 341 yards on the day. While it’s still Gruden’s offense, the simple act of going back to basics meant the Raiders played their most complete offensive game of the 2021 season.

On our two radio shows this week, my co-host Moe Moton and I both talked about the importance of the Raiders creating turnovers and winning the takeaway battle. The Silver and Black defense were, again, stellar. Maxx Crosby finished the day with three sacks, Quinton Jefferson added 1 (LV had 5 on the day), and the entire front continued to shine even without starters Jonathan Hankins and Darius Philon who both were inactive. Soloman Thomas continued to be a disruptive force as did Yannick Ngokaue and Carl Nassib as the defense continues to play as a completed team. On the backend, rookie Nate Hobbs continues to impress and newcomer cornerback Brandon Facyson was stellar as Amik Robertson struggled. Bradley’s system, and the talent he has to fit it, are working and the Raiders are looking more and more comfortable as a defensive unit.

Raiders takeaways #4: Rich Bisaccia has risen to the occasion

No one wants to get their first NFL coaching job because of a scandal like Bisaccia. Yet he has been the picture of grace, respect and leadership. Getting his team through the week of hell that was the Gruden debacle was admirable enough. But to keep his team focused on the task at hand was even more impressive. Lesser teams would have been distracted but Bisaccia kept his team and coaches aimed at the right target. Yes, it’s only one game but give Bisaccia a massive round of applause. Sometimes we don’t ask to lead — it’s thrust upon us. In this case, Bisaccia has proven he is a leader of men and those men responded resoundingly to their new coach. This Raiders takeaways example is our game ball for the coach.