4 Raiders keys to winning against the Chicago Bears 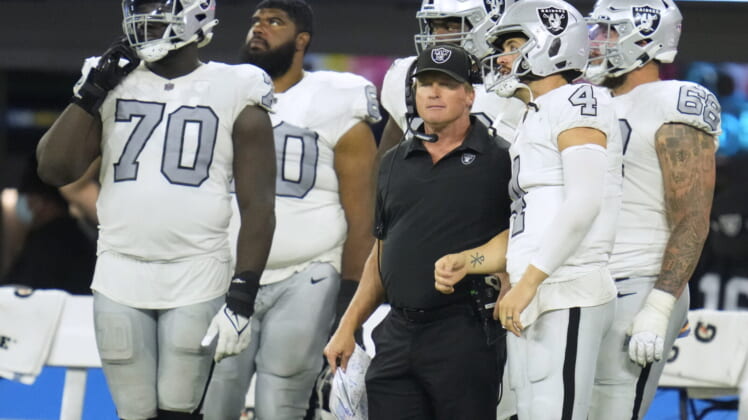 The Las Vegas Raiders take on the Chicago Bears on Sunday at 1:05 p.m. inside Allegiant Stadium for their third home game this season. Besides coming off their first loss of the season, the Raiders are dealing with a rash of injuries on the defense as both cornerbacks Trayvon Mullen and Damon Arnette have been ruled out for the Bears game. Here are 4 Raiders keys to a victory against the Monsters of the Midway

Raiders Keys to Victory #1: Get going early and often

If the Raiders want to take the next step, they need to strike first, whether it is defensively by getting the opponent’s offense off the field or scoring on their first drive of the game.

Through the first four games, opponents are outscoring the Raiders 28-5 in the first quarter.

In the other three quarters, Las Vegas has scored 26 points in the second quarter, 28 in the third and 33 in the fourth. Although players have said they have the mentality before the game, it is not translating into early points. The Raiders keys to winning this game rely on more offense early.

Quarterback Derek Carr needs to get into a rhythm within the game’s first 15 minutes by finding his pass-catchers or running backs.

Offensive Coordinator Greg Olson said when defenses try to stop tight end Darren Waller, who is averaging the second-most receiving yards per game, the Raiders have relied on wide receivers Henry Ruggs, Bryan Edwards and Hunter Renfrow. They are the Raiders keys to getting the offense moving from the get-go.

“We’ve seen combination coverages, we’ve seen them trying to put their best corner on him, their best player, or straight zone, leaving the safety over the top with him,” Olson said when players guard Waller. “A number of different ways that they’ve looked to cover him.

“But it’s been more about the development and confidence in both Edwards and Ruggs, and to not take a look at Hunter Renfrow and say he’s not one of the better slots in the league, it would be doing a disservice to the kid because he’s played very well through the first quarter of the season. It’s really about the development of those younger receivers that when we do see a team that is trying to take away Darren Waller, we’re comfortable going to those other guys.”

Raiders Keys to Victory #2: O-line needs to take the next step

On Thursday, the Raiders made some in-house moves along their offensive line in order to protect Carr or create holes for the running backs.

Rookie Alex Leatherwood is moving from right tackle to right guard, which is his natural position. When recruiting the 6-foot-5, 312-pounder, Olson said they wanted someone who had the flexibility to play multiple O-line positions like Leatherwood, who not only played right tackle at Alabama but also right guard.

“We’re always looking for versatility when we’re looking at offensive linemen in the draft,” Olson said. “The ability to play multiple positions, which something like Alex has done, allows us to experiment somewhat. Especially when we have the injuries that we’ve had that we’ll continue to move guys around and it’s all about trying to find the five best on the field.”

As a result, Brandon Parker is the new right tackle. Parker, 25, was drafted by the Raiders in 2018 and has continued to progress to earn a starting spot.

Olson said with Parker’s time with the Raiders, he has learned the Raiders playbook and can keep improving for years to come.

“We say he’s a fourth-year player,” Olson said of Parker. “He knows our system very well. He’s played for us now for four seasons, so he’s gotten bigger, stronger as we talk about the development of our players. We expect them every year to get better and to show that the arrow is still moving up and he’s shown that to us.”

The Bears have gone through musical chairs when it comes to naming their starting quarterback. When looking at Raiders keys for this Sunday’s game, containing the more athletic Justin Fields is huge.

Chicago head coach Matt Nagy has had to name the starting quarterback over the last two weeks.  Prior to the week four matchup against Detroit, Nagy made the announcement within 48 hours until kickoff that rookie quarterback Justin Fields would get the nod.

Fields, who was sacked nine times against the Cleveland Browns in week two, will get the start against the Raiders.

Defensive coordinator Gus Bradley said he has seen growth in the rookie quarterback that can execute the deep play.

“You just keep seeing the plays from the preseason, until now, you’re seeing a guy keep getting better,” Bradley said. “Very athletic, very strong, throws a really good deep ball, can make plays. He looks downfield when he’s scrambling and getting away from the rush. The biggest stat is they’ve had 14 or 15 explosive plays on here, which is down, but last week they had seven when he was at quarterback. He’s a guy that can definitely stretch the field on us.”

For the second straight week, the Raiders face a young play caller and defensive ends Maxx Crosby and Yannick Ngakoue have to find ways to get to Fields. In addition, linebackers Denzel Perryman and Cory Littleton also have to get to Fields, when the time is right.

Sunday will mark the first time the Raiders have faced the Bears since their match in London when the Silver and Black won 24-21 at Tottenham Hotspur Stadium in 2019. In that game, running back Josh Jacobs, who recorded 26 carries for 123 yards and two touchdowns, scored a game-winning TD with 1:57 left in the game.

Over the last four meetings, including the London matchup, the winner has not won consecutive games since 2007. In addition, this is just the fourth game between the two teams in 10 years.

There are your 4 Raiders keys to win their fourth game of the season and quickly move on from the disappointing loss in Los Angeles.