4 Raiders keys to victory over the Eagles 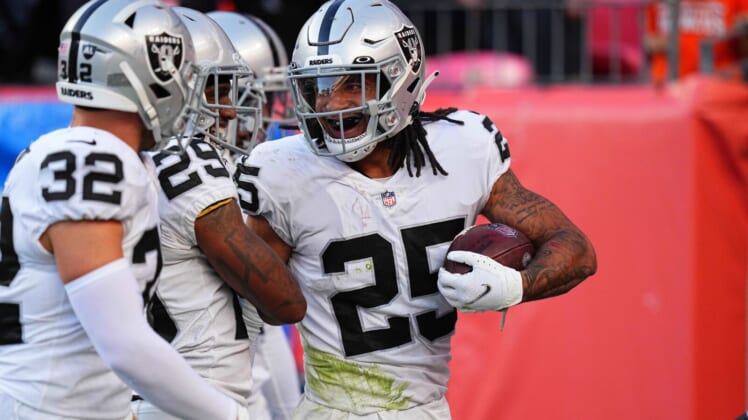 After a 34-24 win in Denver following an uncharacteristic week of preparation, it was just about back to normal for interim head coach Rich Bisaccia and the Las Vegas Raiders as they take on the Philadelphia Eagles at 1:05 p.m. inside Allegiant Stadium on Sunday afternoon. Here are 4 Raiders keys to victory on Sunday:

For the second time in three weeks, the Raiders face a young, mobile quarterback that can extend plays with his feet.

Two weeks ago, Justin Fields from the Chicago Bears completed 12-of-20 passes for 111 yards and a touchdown in a 20-9 Las Vegas loss.

This week, the Silver and Black face Jalen Hurts and the Eagles, who are on extra rest after playing on Thursday Night Football against the Tampa Bay Buccaneers last week.

Against the Bucs, Hurts completed a season-low 12 passes on 26 attempts for 115 yards and a passing touchdown with an interception in a 28-22 loss. Philadelphia also got production with Hurts’ legs as he recorded 10 carries for 44 yards and two rushing touchdowns.

Entering Sunday, Hurts is tied with Carolina’s Sam Darnold for the most rushing touchdowns this season by a quarterback with five.

Raiders defensive coordinator Gus Bradley said the 6-foot-1 play-caller has the ability to extend plays not just north and south on the gridiron but also east and west.

“He’ll keep it alive all the way until the sidelines,” Bradley said. “We’ve seen touchdown passes from him where you have to look close to see if his foot was on the sideline. So, I think that’s really unique about the Eagles is that they use the whole width of the field in their pass game, in their run game. They can run inside, they can run outside and with his ability to scramble, he can keep plays alive.

“I’ve been very impressed with him. This is the first time we’ve really studied him and watched him back there. I think they’re doing a great job with his skill set.”

Containing Hurts, and forcing him into bad decisions is one of the Raiders keys to shutting him down and winning the game..

Last Sunday against the Denver Broncos, Las Vegas got four takeaways (three interceptions and a fumble) that proved to be a big difference in the 10-point win.

One of those takeaways was a forced fumble, courtesy of defensive tackle Solomon Thomas, who is in his first season with the Raiders.

It was first-and-10 for the Broncos at their own 36-yard line. Quarterback Teddy Bridgewater took the snap. After going through his looks, he could not find anyone, so he scrambled up the middle. Thomas comes in, punches the ball out and linebacker Denzel Perryman recovered the fumble.

Bradley said that defensive line coach Rod Marinelli’s experience and ability to connect with players had kept the energy among the unit.

“I think he’s always been a guy that has played with great effort,” Bradley said of Thomas. “That’s one thing we liked with him and knowing Coach Marinelli’s mentality with that group. We knew he’d be a great fit in there. So, a lot of it is just a second effort with him. The play he caused a fumble was unbelievable.

“It was really a lesson for everybody about a lot of times these big plays come out of the second effort and that’s really what he’s all about.”

Of all the Raiders keys, this is one the team must continue to develop and improve on.

That has to continue against an Eagles team that allows the fifth-most rushing yards and the most rushing attempts. Having Josh Jacobs is one thing, but adding Kenyan Drake from the offseason has elevated this running game on top of the cohesion from the offensive line after it rotated two weeks ago.

As this run-blocking O-line continues to evolve, in addition to an increase in Drake’s volume, offensive coordinator Greg Olson said he and his assistants continue to work and find the right pieces to the puzzle.

“We’ll try to make more of a commitment to it as a staff in terms of how we prepare and how we practice the run game,” Olson said. “We’re not happy where it’s at. We’ll continue as a staff to find what we think is the best scheme with the players we have available upfront and the running backs that we have.”

One of those players continuing to improve is rookie Alex Leatherwood, who moved from right tackle to right guard two games ago.

During that time, the 6-foot-5, 312-pounder said he had adjusted nicely to the position switch.

“Yeah, 1000%,” Leatherwood said. “It’s definitely inside, so there’s not as much space and it’s a little slower up in there. So, naturally, it comes a little bit easier.

One of the Raiders keys to victory against the Eagles is interim coach Rich Bisaccia keeping the momentum from the Denver game moving forward.

As Bisaccia takes over, he hopes his players can come together and build the team’s identity to compete every day.

Progress continues for the franchise both on the field and in the organization.

The Yonkers, New York native said the Raiders are continuing to develop what this team is all about and the personnel – on offense, defense and special teams – it will take to be put in the best situations.

As the Raiders continue to build their identity, they face the Eagles on Fox for a Sunday afternoon match before a Week Eight bye.