4 Players Who Must Shine vs. Seattle 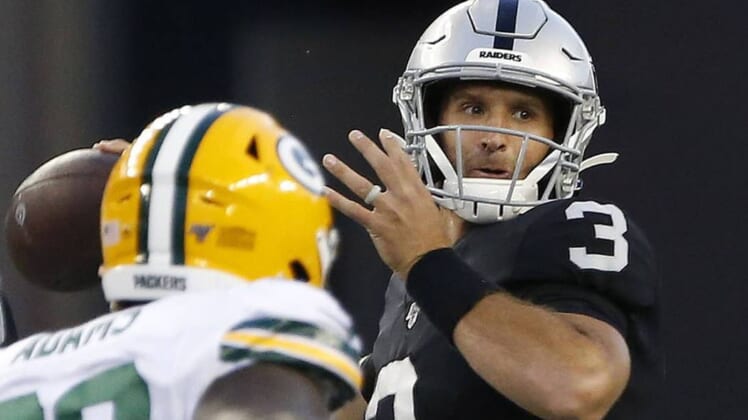 It’s make or break time for players who want to make the final 53-man roster for the Raiders.

Saturday at 1pm PT will be the hour of reckoning for the men who made it through Raiders camp and through four preseason games. When you have 90 players and have to say goodbye to 37 of them in one day, it isn’t easy.

That’s especially true for the Raiders in 2019 who have had a productive camp full of young players who have shown flashes of brilliance at times. Yet, there are some players who no doubt have talent, dedication, and have stayed healthy, who will find themselves looking for work come Sunday morning.

There are others still who may be close to making the roster but must put all doubt aside if they’re going to stick. Here are four players we believe have to shine on Saturday against the Seahawks to cemement their place on the final 53-man roster.

Peterman played well against Green Bay and impressed Gruden and staff with his late-game management in helping his team pull out the 22-21 win in Winnipeg. Peterman could have already locked up the QB3 spot but, with a good showing in the Emerald City, he could get more – specifically the QB2 spot. Mike Glennon has looked good at times but if what we saw in the last episode of HBO’s Hard Knocks, Gruden isn’t sold and has a soft spot for the much-maligned Peterman. Should he repeat his performance against Green Bay against Seattle, he could lock up QB2. Or he could implode. It’s a big night for the young signal-caller.

Let me say this, the outpouring of scorn heaped upon Ateman by some Raiders fans since his on-screen conversation with Carr during Hard Knocks is unfair. It was one moment and no player’s character or work ethic should be judged by one conversation. Still, Ateman is on the outside looking in thanks to the breakout camp and preseason by local Alameda product Keelan Doss. Ateman is squarely on the bubble and is almost certain to be cut unless he plays hard and can make some plays vs. Seattle.

Cabinda signed as a free agent last year, was cut, and then resigned mid-year by the Raiders. Gruden and Guenther really like the kid and see the potential. But the NFL isn’t about potential – it’s about performance. Cabinda has had great moments this preseason but also has made his share of mistakes. Can he overcome them and have a big game against the Seahawks? To make this roster, he has to have a big game so his coaches fight for him before Saturday’s roster trim. We would have said he’s a lock for the practice squad if he doesn’t make it, but the team has some really tough calls and it’s going to be an uphill battle for the Penn State product.

The free-agent four-year starter from Alabama has played well since joining the team but it’s been in a quiet way – if that makes any sense. I tend to believe he’s earned his way on this roster but with veteran Jonathan Cooper continuing to get comfortable on Tom Cable’s line, Cotton has to have an error-free game to even stay on the bubble. The surprise performance of several Raiders o-line players has made it tough. With Gruden’s preference for veterans at some key positions, Cotton could be cut loose simply due to a numbers game. There’s no question he’ll get snapped up if the Raiders indeed let him go.

The Raiders have a good problem on their hands. Gruden and general manager Mike Mayock filled the roster with players enough to create good competition at several positions. Now, they must make the tough choice on who stays and who goes.

It will be a joyful and soul-crushing Sunday for several young men.