Coach reveals Nick Diaz will return in the back half of 2022, here are 4 ideal next fight options

Despite a performance to forget in his long-awaited return this past September, Nick Diaz is expected back in the UFC Octagon during the second half of 2022. But who would be the right opponent for the original Stockton bad boy upon his return?

After six and half years away from the fight game, Diaz returned to the cage last fall and faced off with another well-aged welterweight great in Robbie Lawler. It was rematch 17 years in the making and ended up being an entertaining fight. However, despite the bout being an action-heavy clash between a couple of 170-pound greybeards, Diaz was not in vintage form.

The matchup took place at middleweight, instead of at welterweight where he is his best, and it showed in Diaz’s physique and his sluggish movements. What made it all the more disappointing was seeing one of the most unbreakable wills in MMA history decide to quit midway through the third round in one of the most shocking moments in 2021 MMA.

Yet, despite his disappointing showing the 38-year-old is expected back at some point later this year. On Monday, the former Strikeforce champion’s long-time coach Cesar Gracie posted an image of his pupil on Instagram with the caption: “Look for @nickdiaz209 to fight by the end of the year.”

Assuming Gracie does have the real deal intel on Diaz’s fighting future, who would be the right opponent for this stage of his career? Here are the four best options to welcome Diaz back to the Octagon in 2022.

Nick Diaz vs Matt Brown was an idea bandied about last year when it became official that Diaz would return to the Octagon. At this point in both of their careers, offering up entertaining scraps against competitors in the same age bracket makes the most sense. Also, to maximize the few opportunities they have left in promoting a Diaz fight, the UFC must book him against other mad-dog fighters that will willingly go to war with the Californian. “The Immortal” checks off all those boxes while being a popular fighter deserving of a clash with a big-name opponent.

A Jorge Masvidal vs Nick Diaz bout would give the UFC one of its best storylines to sell in 2022. Can big bro Nick avenge the defeat “Gamebred” handed his little brother Nate in their 2019 BMF title bout? Furthermore, there is the secondary narrative of Masvidal adding to his legend by attempting to be the first man in MMA history to sweep the Diaz Bros. in the cage. 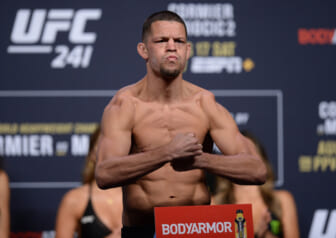 Also Read:
Nate Diaz next fight: Who is next for Stockton’s bad boy?

Diaz suggested he was deserving of a title fight upon his return to the promotion last year. Obviously, that is never going to happen, but the next best thing for all involved is Masvidal. He is a top-five fighter who recently fought for the belt, and his being on a three-fight losing skid brings his status down to a level where a fight with Diaz seems far more reasonable compared to other fighters in the top-10.

While Kevin Holland is not nearly as big a name as the other fighters on this list, he is still popular among UFC fans and has a unique selling point in a fight against Diaz. Earlier this year, “Trailblazer” claimed that the pair crossed paths a few years back, and the one-time welterweight title challenger was not a fan. Even allegedly trying to make him taste a patented “Stockton slap.”

The UFC lives to sell fights that have built-in heat, and if there is legitimate animosity, there may be no better pairing — at welterweight or middleweight — than a matchup between two of the busiest in-fight talkers in MMA history. Just imagine the conversation that would be had as they tried to pummel the other into unconsciousness? It would be a site to see and hear.

A Nick Diaz vs Donald Cerrone fight is similar to a hypothetical Brown clash and last year’s Lawler bout. It’s a booking between past their prime greats who will simply throw down for the entertainment of cage fighting fans. “Cowboy” and Diaz could be competing in their last one or two fights. As two of the best welterweights to have ever competed in the promotion, the UFC owes it to fans to make this fight happen before both call it a career.

While Cerrone and Diaz are very different people outside the Octagon, they are the same sort of animal inside it. Sure this isn’t a scrap between two men in their primes, but even with each closing in on 40, a fight now would still be one heck of a show.