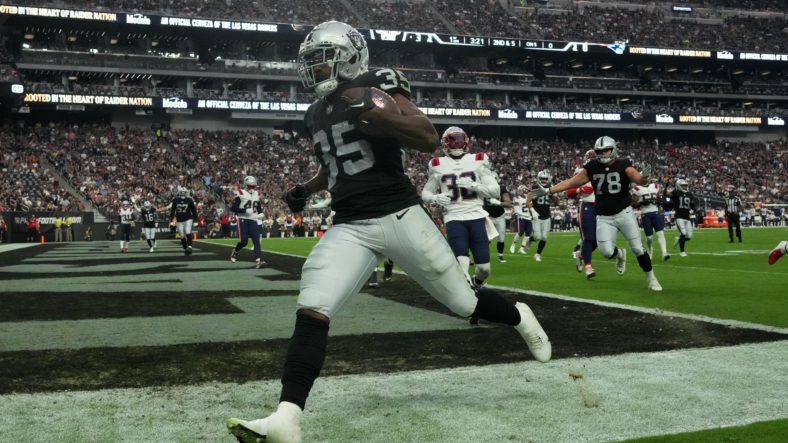 Throughout the offseason, we mostly discussed Las Vegas Raiders starters and players set to take on key roles in 2022. But a team’s depth has just as much importance in an NFL season. Every club must adjust to injuries, and the Raiders will test their depth at multiple positions in Week 2 against the Arizona Cardinals.

On their injury report, the Raiders listed linebacker Denzel Perryman (ankle), safety Tre’von Moehrig (hip), and center Andre James (concussion) as out for Sunday’s contest. Running back Brandon Bolden (hamstring), who didn’t practice this week, is listed as doubtful.

In place of Perryman and Moehrig, defensive coordinator Patrick Graham will likely rely on experienced veterans in Jayon Brown and Duron Harmon, respectively. The Raiders should expect the two veterans to adequately handle bigger roles when called upon. Both defenders played more than 65 percent of the snaps last week.

Without James, Bolden, and also cornerback Anthony Averett — who underwent surgery on his broken thumb this week — we’ll likely see more from rookies and inexperienced players on the depth chart on Sunday. Vegas may get a good look at its top two 2022 draft picks and a former fourth-rounder who still needs to find his way at the pro level.

Let’s take a look at four young Raiders who could have an opportunity to impress the coaching staff in a matchup with the Cardinals.

In Week 1 against the Los Angeles Chargers, Dylan Parham played 35 snaps at right guard in rotation with Lester Cotton Sr., per Pro Football Focus. He’ll likely slide over to center in place of James Sunday.

In four preseason games, Parham played the third-most snaps at center (69) behind Hroniss Grasu (82) and James (73). Because Vegas invested a third-round pick in Parham, he’s the probable next man up after James at the pivot spot.

Though some people will remember Parham’s not-so-great moment when he looked lost on a particular play in the team’s second preseason game against the Minnesota Vikings, he had an overall solid performance in the exhibition period. More importantly, the Memphis product had one of the better performances against the Chargers last week, giving up zero pressures.

Also Read:
How to Watch the Las Vegas Raiders Games This Season (2022)

Parham didn’t play center on the collegiate level, but he cross-trained at the spot over the past four months. The rookie third-rounder could become the permanent replacement for James, whose contract voids after the 2023 campaign. The club can also save $5 million if it designates James as a post-June 1 cut next offseason, per Over the Cap.

But for now, Parham gets his first regular-season start at center Sunday. Based on his draft status, he’s expected to carve out a starting role sooner rather than later.

As Parham moves to the pivot, Cotton should have the right guard spot all to himself. He logged 23 snaps at the position last week. Like Parham, he didn’t allow a pressure. Against the Chargers, Cotton didn’t start and initially took a backseat to Parham, but he’ll have a chance to show that he’s a serviceable full-time right guard while in a push for more snaps.

With uncertainty around James’ short-term availability, Parham may have an extended run at center, which means Cotton would have to make strides in his development while in a starting position as well. He’s set to make his first NFL start Sunday against the Cardinals after three seasons on and off the Raiders’ practice squad. 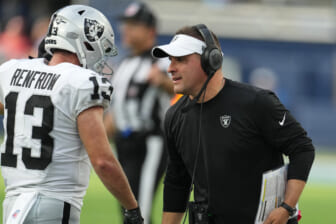 Also Read:
5 intriguing keys to watch for the Las Vegas Raiders against Arizona on Sunday

Following Week 1, Cotton has already played more snaps (23) this season than he’s played from 2019 through 2021 (five). This is a big spot for him if the Alabama product wants to hold a place in the team’s offensive line rotation this year and potentially land a starting job in 2023.

In Week 1, we didn’t see Zamir White on offense. He only took four snaps with the special teams unit. Though White isn’t going to start over Josh Jacobs Sunday, he could take on a handful of carries in place of Bolden, who registered three rush attempts for seven yards in addition to two receptions for 21 yards and a touchdown. 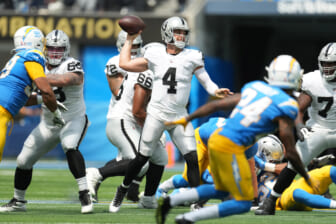 Also Read:
Las Vegas Raiders: Players stock up and stock down for Week 2 vs. Arizona Cardinals

In Week 1, the Raiders recorded the fewest rush attempts (13) as they played from behind for most of the game, so expect the number of carries to go up unless the Cardinals jump out to a big lead as the Chargers did in the season opener. Jacobs ran the ball effectively, rushing for 57 yards on 10 of the team’s 13 carries, but Vegas’ negative game script (trailing by a significant margin on the scoreboard) and quarterback Derek Carr’s laser focus on wideout Davante Adams resulted in a pass-heavy game plan.

Remember, the Raiders consistently established the run during the exhibition period and though White only averaged 3.1 yards per carry, he scored two touchdowns inside the 5-yard line. Assuming Ameer Abdullah handles the pass-catching duties, White should see some action with a handful of carries as Jacobs’ backup in a more balanced game plan. The Cardinals allowed 123 rushing yards to the Kansas City Chiefs running backs last week.

Amik Robertson will have another opportunity to showcase himself as the No. 3 cornerback on the depth chart on Sunday.

Last week, Averett played the second-most snaps (32) on the boundary with only two snaps in the slot where Nate Hobbs served as the primary defender. Boundary snaps for Raiders cornerbacks in Week 1:

With Averett on injured reserve, Robertson will probably see an increase in his snap count on the boundary in nickel sets as Hobbs lines up in the slot.

Undrafted rookie cornerback Sam Webb is on the roster after a solid showing in the preseason, but we should expect Robertson to get the first crack at the vacant spot because of his competitive edge in experience. Also, keep in mind that Webb only logged one full practice this week because of an ankle injury.

Though Robertson has struggled in the past and the Raiders recently Javelin Guidry, whom the Arizona Cardinals claimed and then released within 10 days, the former New York Jet needs time to catch up to speed in Graham’s scheme.

In a key position, Robertson may have a limited time frame to make a strong impression on the new coaching staff, but he can take a step in the right direction with a solid performance against the Cardinals, who won’t have wideouts DeAndre Hopkins (performance-enhancing drug policy suspension), Rondale Moore (hamstring) or Andy Isabella (back). Marquise Brown, A.J. Green, and Greg Dortch will lead the Cardinals’ wide receiver unit Sunday.

If Robertson struggles, he could quickly fall behind Webb and Guidry on the depth chart in his third season, which is a crucial year of development for a lot of NFL players. On the flip side, he can show some promise after missed opportunities over the past couple of seasons.