4 keys to watch for a Raiders win against the Chargers 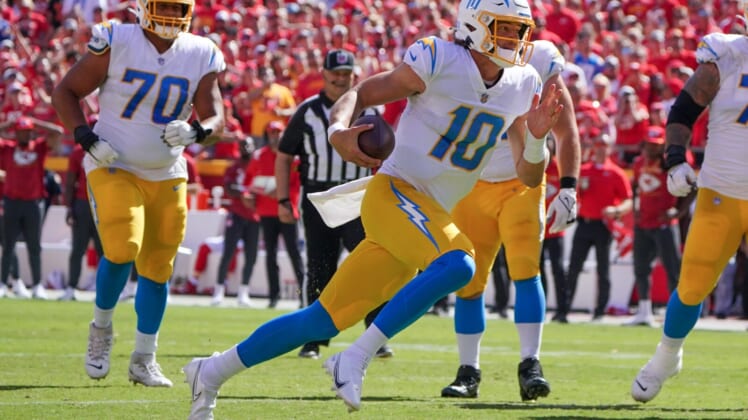 The Las Vegas Raiders take on the Los Angeles Chargers on Monday Night Football game this season on Oct. 4. It’s the Raiders second game in prime time this season. Here are 4 keys to watch on Monday night:

History behind the rivalry

The Raiders’ first matchup against the Chargers came during the 1960 season when both teams were with the American Football League before the NFL-AFL merger in 1966. In the first game 61 years ago, the Los Angeles Chargers beat the Oakland Raiders 52-28, a season before the Bolts moved to San Diego.

The Raiders lead the all-time series 65-55-2 and are looking to get win No. 66 against the Chargers on Monday night.

This matchup will mark the 10th time the two franchises are meeting on Monday night and first in nine years, dating back to Sept. 10, 2012, when the Oakland Raiders lost to the San Diego Chargers 22-14 in the East Bay.

In addition, this is the first time the two franchises are facing each other on Monday night since both teams relocated to their new cities in Los Angeles and Las Vegas, respectfully.

For a franchise that has spawned 61 years that was previously located both in the Bay Area and Los Angeles, people have grown up as Raiders fans and those in the Los Angeles area have the opportunity to see the Raiders closer to home rather than taking a four-hour drive from Hollywood to Las Vegas.

“I welcome Raider Nation to the field down there,” Gruden said. “I have no idea. Some of those Dolphin fans snuck into our stadium last week, perhaps Raider Nation can make a stand down in LA. We look forward to seeing the fans, obviously and, it will be a great game as it always is. Great rivalry.”

In the two games last year against Las Vegas, Herbert averaged 320 passing yards with four passing touchdowns. He also rushed for a score in the second matchup and lost a fumble in each game.

Through the first three games this season, Herbert has thrown for 956 yards and six touchdowns, including four in the Chargers’ victory in Kansas City last week.

Gruden said the Chargers’ offense – in addition to Herbert, the team has running back Austin Ekeler and wide receivers Keenan Allen and Mike Williams – have been key to their success over the years.

“Well, they’ve had it going on offense for a while since Herbert showed up,” Gruden said.  “Phillip Rivers had a great run there. They’ve been a good offensive team seems like every year. They’ve got some weapons outside that can do damage.

“They have a great creative runner – Ekeler. Quarterback’s a great player. He’s really something else to watch. He’s can throw, he can run. He’s smart, makes good decisions and they have a creative scheme. No doubt it will be a big time challenge.”

Herbert is part of the group of mobile quarterbacks who can not only throw, but also scramble and run the ball.

As a result, the Raiders’ pass rush will have to balance when they go after Herbert, especially after last week when Miami Dolphins quarterback Jacoby Brissett extended plays with his feet.

“It’s hard to unleash the rush on this guy because they allow him to scramble,” Gruden said. “He will scramble, and he will hurt you bad. We got hurt bad last week with some scramble plays. So, we really have to be careful with our rush.

“We got to do a great job containing to him first, getting to him second and getting him on the ground third, which is not easy to do. This is a big, strong, young, tough quarterback.”

Last week against the Dolphins, the offense got going in the second half, en route to running back Peyton Barber totaling 23 carries for 111 yards and a touchdown.

Gruden said Barber, who signed with Las Vegas early last month, is enjoying his time with the Raiders while seeing work pay off on the gridiron.

“He’s going to take advantage of every opportunity he gets, and you’re going to have a hard time not liking him,” Gruden said. “Right now, I love him and so do our players and our coaches. We’re not going to hesitate one bit to put him in a primary role after what he did against the Dolphins.

The success of the run game translated to the pass game as quarterback Derek Carr found nine receivers last week.

Like the past two weeks, spreading the ball around was key. With the run game taking steps further, it led to the offense scoring 25 consecutive points, but Gruden said work still continues, especially in the run game.

“We had some success throwing the ball and maybe that helped the running game,” Gruden said. “Sometimes, it works hand in hand, but we have to get a lot better running the ball from start to finish.”

4. Don’t give the Chargers free opportunities

Last week, the Dolphins got a big interception that led to six points at the end of the play to open the scoring.

In addition, Miami had fourth-and-goal from the 1-yard line and got in the end zone as time expired in addition to successfully completing the two-point conversion to tie the game and force overtime. Those opportunities are points that could have been off the scoreboard and the game last week could have ended in regulation.

Despite being 3-0, Gruden said the team has to continue to improve on all facets of the game.

The Chargers and Raiders kickoff on Monday Night Football at 5:15 p.m. on ESPN.