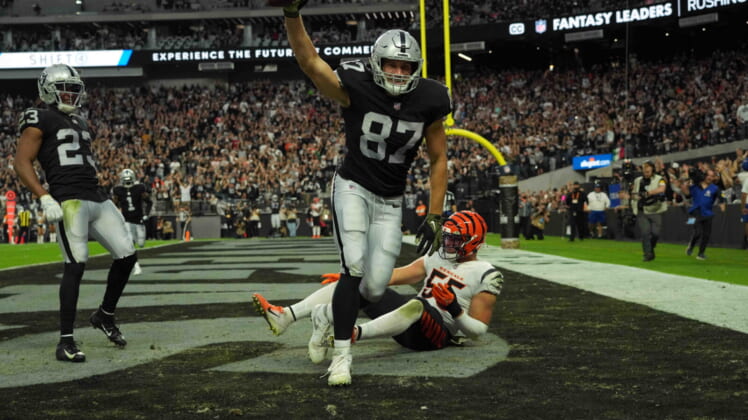 The Las Vegas Raiders take on the Washington Football Team inside Allegiant Stadium this afternoon at 1:05 p.m. PST in an important game for Rich Bisaccia’s team.

This is the 14th meeting between the two teams and the first since the 2017 season. The Raiders are looking to remain in playoff contention as they look to get their first win against Washington in 16 years.

Las Vegas will try to get its first home win against the Washington organization in 32 years, when the team was located in Los Angeles.

Raiders must control the game

One of the biggest things to watch in tomorrow’s matchup will be how long both sides have the football offensively.

In the Raiders’ six wins this season, including the three overtimes victories, Las Vegas has had an average time of possession of 34:02, highlighted by last week’s win over Dallas when the team recorded a season-high 39:02, a little less than two-thirds of the game with the ball.

On the flip side, across the team’s five losses, the Raiders have a time of possession of 26:03.

Three weeks ago, when Washington hosted Tampa Bay, the Football Team was leading after Tom Brady and the Buccaneers scored a touchdown to get within four with 10:55 remaining in the game.

On the ensuing drive, Washington went on an 80-yard drive that lasted 19 plays and took off 10 minutes and 26 seconds off the clock in a possession that ended on a 1-yard touchdown run by running back Antonio Gibson on fourth-and-goal with 29 seconds left.

Defensive coordinator Gus Bradley said the team aims to get quarterback Derek Carr the ball as many times the defense can.

“Usually that doesn’t work well if they have it for 40 minutes or in the 30s,” Bradley said. “We want to get our offense the ball as many opportunities. Whether it is takeaways or three-and-outs to get them for opportunities. So, time of possession is going to be a big factor.”

One way to extend the time of possession in favor of the Raiders is to run the ball. Giving the ball or throwing check downs to running backs Josh Jacobs and Kenyan Drake will be key.

Carr, who leads the NFL with 3,414 passing yards, said the offensive scheme is relied on setting ground game early in order to find wide receivers such as DeSean Jackson or Hunter Renfrow.

“I have always been about, ‘you have to have a solid run game,’” Carr said. “No, that doesn’t mean you have to do it 40 times, but you have to when you turn around to hand the ball off. It has to means something to the defense and without that, we wouldn’t be able to throw the ball as much as we can and as much as we do.”

One example of the run game leading to the pass came during the game-winning drive last week against the Cowboys.

After Dallas punted, the Raiders took over from its own 22-yard line with 8:10 remaining in overtime while only needing a field goal to win. On first down, Carr threw a short pass to Jacobs for eight yards. Next, Jacobs busted out for a big run of 21 yards.

Despite losing eight total yards on the next two plays, it led to the defensive pass interference while wide receiver Zay Jones was going after the football. That penalty set up the game-winning 29-yard field goal by place kicker Daniel Carlson.

In order for Carr to be successful in the passing game – Jacobs, Drake and at times Carr when he scrambles – the run has to be efficient, especially when Washington does not have its premiere edge defender in Chase Young, who suffered a torn ACL against Tampa Bay.

Waller out, Moreau to step up

Speaking of injuries, the Raiders are dealing with some as well.

Yesterday, interim head coach Rich Bisaccia said tight end Darren Waller, who suffered a strained IT band in his knee against the Cowboys, remained up in the air this week but has now been ruled out.

Foster Moreau will now have the lead tight end duties.

Moreau has already filled in for Waller on two occasions this season. The first came against Philadelphia when Waller was dealing with an ankle ailment and Moreau recorded six receptions for 60 yards and a touchdown prior to the bye week.

The second time was last week when Waller suffered a leg injury in the second quarter against Dallas.

Bisaccia said the team has a strategy if Moreau steps in as the first tight end on the depth chart because the 24-year-old from LSU also has an integral part in both facets on special teams.

What to watch for in Washington’s offense

The Washington Football Team is led by quarterback Taylor Heinicke, who completed 27-of-35 passes and threw a touchdown in a 17-15 victory over Seattle on Monday night this past week at home.

The Football Team’s run game will be led by Antonio Gibson, who will see more volume with J.D. McKissic out due to being in the concussion protocol.

The passing game is led by wide receiver Terry McLaurin, who has caught at least four passes in 10 of 11 games this season, followed by tight end Logan Thomas, who returned last week after being sidelined by a hamstring injury for about two months.

Bradley said Washington’s offensive scheme is patient as it looks to throw for three, 10 and 20 yards downfield.

“The passing game, very efficient, done very well over the last three games,” Bradley said. “Really impressed by the quarterback, obviously No. 17, McLaurin’s got really good speed. Deep developing routes. They do a good job of stressing level two and level three. And they’ll dump it down and take what they can get.”