4 key Dallas Mavericks who need to step up vs. Clippers

The Dallas Mavericks are in great position to upset the Los Angeles Clippers after winning Game 1, but need these four players to come up big to win the series.

The Dallas Mavericks surprised the NBA world with an emphatic 113-103 win away to the Los Angeles Clippers. Dallas played exceptionally well, but the Clippers did not. The Clippers led the league in three point percentage with 40.9%, but shot just 27.5% in game one. The Mavericks can’t rely on the Clippers shooting poorly all series.

Luka Doncic is showing he’s a consistent playoff performer, but he’ll need help to win a best-of-seven. These are the four Dallas Mavericks’ stars who need to raise their play against the Clippers. 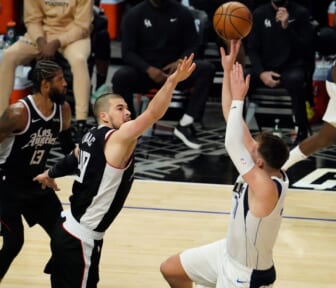 This has been a breakout season for the former second rounder. Averaging career highs in almost every statistical category, Brunson finished fourth in the race for Sixth Man of the Year.

Along with Tim Hardaway Jr., Brunson creates instant offense off the bench. He struggled in the first half against the Clippers, but had a huge third quarter, including two big and one plays that kept the Mavs’ momentum.

Brunson missed last season’s playoff series against the Clippers with a shoulder injury. Many fans point to his absence as one of the reasons Dallas fell short of the upset. If he can score like he did in the second half of game one, the third year point guard may be the key to pulling off the upset.

One of the few negatives from the Mavericks’ win was Kawhi Leonard’s dunk over Maxi Kleber. Most players would have moved out of the way of Leonard’s posterization, but Kleber never gives up on a play. The German power forward is one of the most underrated  “3-And-D” specialists in the league. Big enough to guard centers, but fast enough to guard wings, Kleber is arguably the best defensive player on the Mavs’ roster.

In last year’s Clips-Mavs postseason duel, Kleber guarded Kawhi Leonard, who was able to score with ease. In game one, Dallas tried a few different options on Leonard, with Hardaway, Dorian Finney-Smith, or Josh Richardson taking the assignment.

The bigger concern for Dallas is if Kleber shoots 19% from three, as he did in that series. Dallas relies on Kleber’s deep ball. If he can shoot at his 42% season average, Kleber could be a difference-maker.

Richardson was brought in from Philadelphia for a situation like this. The shooting guard is known for his defensive prowess and, on paper, is the perfect matchup for Leonard and Paul George.

However, Richardson struggled and was benched from the starting lineup for the last games of the regular season. This continued in Game 1, with Hardaway taking his spot and scoring 21 points. Richardson will continue to come off the bench, but he could play a huge part versus LA.

While his offensive game hasn’t worked with the starting lineup, Richardson has looked much better against second units. He’s been taking better shots, while also showcasing playmaking ability. Playing next to Brunson and Hardaway, Richardson can focus primarily on defense where he’s been a stabilizing force with bench lineups.

With two elite wings playing for the Clippers, Richardson will have opportunities to swing games defensively.

As has been the case since his arrival to Dallas, Kristaps Porzingis’ play will decide how far Dallas goes in the playoffs. The Mavericks are built around the offensive talent of Doncic and Porzingis, allowing the role players to play defense and hit open shots. However, Porzingis has so far been a disappointment. The series opener against the Clippers may have been his worst moment yet.

Porzingis was a mediocre 4-for-13 from the field, finishing with 14 points from fourth-quarter free throws. Finney-Smith and Hardaway had huge games, but Dallas didn’t seal the game until late because of Porzingis’ terrible play. The Mavs won’t win another game where Porzingis shoots 31% from the field.

The Latvian’s defense wasn’t much better, but Doncic was causing so many problems for the Clippers they had to bench Ivica Zubac. Protecting the paint will be less important than scoring.

If Porzingis can average 25 points a game during this series, Dallas will advance. But if Porzingis plays like he did in Game 1, the Mavericks will come up short against the Clippers again.