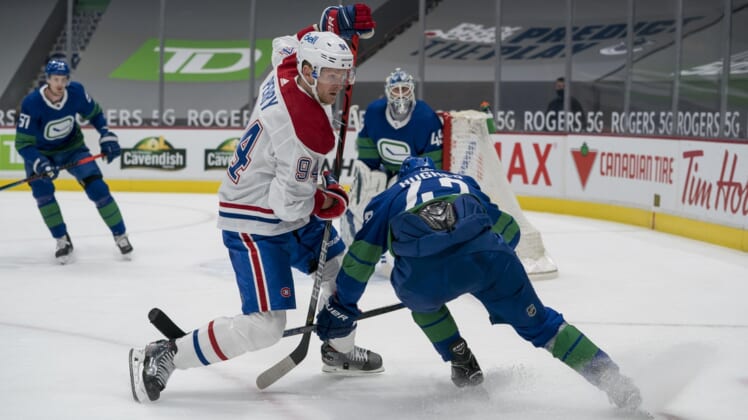 Nick Suzuki remained productive with a goal, and Corey Perry added one of his own in his Canadiens debut, as Montreal earned a 5-2 road victory Saturday over the Vancouver Canucks in the third consecutive game played between the teams.

Brendan Gallagher, Jonathan Drouin and Joel Edmundson each scored third-period goals as Montreal went back on top for good after the game was briefly tied.

The Canadiens took two of the three games against the Canucks and have won four of their last five overall. The teams meet again at Montreal on Feb. 1 and 2.

Elias Pettersson and Nils Hoglander scored third-period goals for the Canucks, who have lost five of their last six after a season-opening victory. Pettersson scored his first of the season while Hoglander delivered his second in his seventh career game.

Gallagher’s game-winner, and second of the season, with just under 11 minutes remaining, came three minutes after Vancouver’s two-goal outburst. Montreal went 4-0-2 on their season-opening road trip.

Three minutes into the game, Edmundson and the Canucks’ Tyler Myers engaged in a fight near center ice. It came as the result of Myers’ hit Thursday on Montreal’s Joel Armia that has the forward out indefinitely with a concussion.

Suzuki’s goal, 10:54 into the game, gave Montreal a 1-0 lead and made him the first Canadiens player with a point in the opening six games of a season since Andrei Markov (2008-09).

Perry, who was activated to take the place of Armia, scored at 11:42 of the second period during a two-on-rush. The 373rd goal of his career came after he was activated from the team’s taxi squad. It gave Montreal a 2-0 advantage.

Pettersson scored his first of the season for the Canucks at 3:50 of the third period while Hoglander followed just over two minutes later to tie it 2-2.