Philadelphia 76ers general manager Daryl Morey very well may have been tampering when he floated the idea of Stephen Curry joining the team, but could a trade actually be possible?

Just to make the salaries work in a compelling package that’d unite Curry with his younger brother, Seth, the Sixers would need to send Joel Embiid or Ben Simmons to the Golden State Warriors as part of a deal.

Given how Embiid has struggled to stay healthy and Simmons isn’t maximizing his potential in Philly, maybe either of the would prefer a fresh start with a new organization. Much depends on how the 2021 NBA playoffs unfold.

Before we get into the heat of the NBA offseason, let’s take a look at three scenarios in which Morey could actually pull off getting Curry to Philly, courtesy of TradeNBA.com’s trade machine. 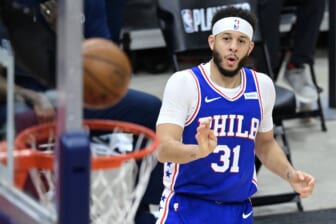 The time to sell on Andrew Wiggins is now for Golden State, as his stock has never been higher. It’d also give the Warriors another high salary to play with so that they can get a decent haul in exchange for Curry — and we’re not only talking about Ben Simmons here.

That’s right. Tobias Harris comes over as part of this blockbuster trade. Harris is a versatile forward who’d be a phenomenal fit in the small-ball lineups the Dubs love to run, either at the 3 with Draymond Green and James Wiseman in the frontcourt, or even at the 4, with Green at the center spot.

If the Warriors were to give up Curry, which seems unthinkable, they’d need some offensive firepower in any hypothetical exchange. That’s what Harris provides, and even though Hill is up there in age, he’s still among the better 3-point marksmen in the game. His ability to play either guard position would suit the Warriors, too.

This is a much more straightforward proposition — and it’s one that both teams would have to strongly consider.

Outlandish as it may seem to just offer a straight-up trade involving these four players, think about it: Wiseman just turned 20 years old and has so much upside to explore. He’d be going to a coach in Philly in Doc Rivers who just helped Joel Embiid reach new heights as a player this season.

The Sixers would lose some defensive prowess with Embiid gone, yet he’s so often injured that it’s hard to count on the big man to deliver down the stretch of a deep playoff run. Wiseman doesn’t have that type of wear and tear on his body. He did miss time as a rookie, but with Embiid, we’re talking about someone who missed his first two NBA seasons with injuries.

Wiseman was the No. 2 overall pick in last year’s draft for a reason. It seems like he’s the better long-term bet for Philadelphia to make.

As for the Warriors’ side of this, well, a trio of Simmons, Embiid and Green would make them the most suffocating defense in the NBA. Plop in a healthy Klay Thompson to that mix, and suddenly Golden State looks pretty darn good on paper for the foreseeable future.

Stephen Curry to 76ers in 3-team trade with Pacers

Parting with Simmons and Embiid is a tough one for the Sixers, but if it meant getting the reigning scoring champion in Curry, an elite interior defender in Indiana Pacers star Myles Turner, and four first-round picks? Shoot, that’s not a bad haul at all.

Indiana should be going all-in at this point to make something happen. There’s a strong core in place that’s just in need of the right guidance. It’s very likely Nate Bjorkgren won’t be the head coach for much longer, and landing someone like Embiid, even if it ultimately costs T.J. Warren and a few first-rounders, is so worth it.

Embiid pairing with Domantas Sabonis would be an absolutely game-changing frontcourt. Warren is an extremely versatile scorer who’d fit in nicely with the Warriors and give the distributing extraordinaire Simmons another weapon to work with on the wing, along with Thompson and Wiggins.

If the Sixers got healthy seasons from Curry and Turner, with so many first-round selections to make another splash move, they could definitely push for a championship. 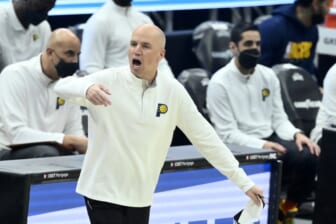